I understand
Home•Coca-Cola to invest £11m to...

Coca-Cola Europacific Partners (CCEP), the largest independent bottler of Coca-Cola globally, has announced an £11m investment over the next five years in its manufacturing sites in Great Britain, as part of its drive to become a net zero business by 2040.

The investment will see its 200-strong fleet of material handling equipment (MHE), including some gas-powered forklift trucks, which is used to move over 520 million unit cases of product around the bottler’s sites, replaced with units powered by lithium ion batteries, producing no carbon emissions in their day-to-day operation.

This change will reduce CCEP GB’s carbon emissions by more than 1,500 tonnes each year (compared to a base year of 2020) and represents a further step towards its target of reducing carbon emissions across its value chain by 30% by 2030 and reaching its overall ambition of reaching net zero by 2040. All CCEP’s GB sites have been powered by 100% renewable electricity for over 10 years and CCEP GB has already seen a 47% reduction in its carbon footprint since 2010. 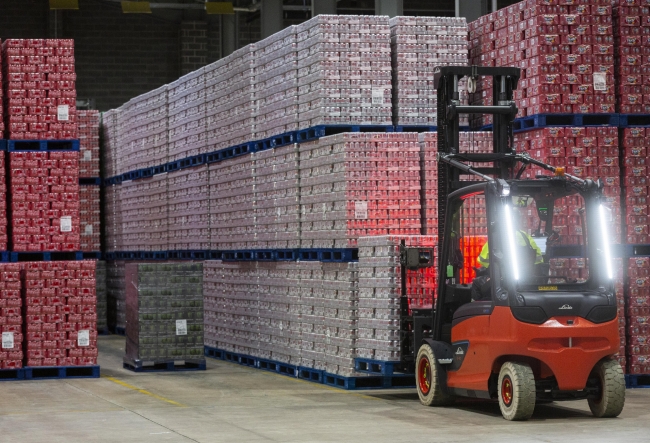 Work has already begun to replace the MHE fleet, with the transition complete at the Morpeth factory and Milton Keynes cold drinks operations. Last month, training began on the 76-strong fleet being introduced at Wakefield, Europe’s largest soft drinks production site by volume. The changeover will be completed at four remaining sites in Great Britain by 2024.

CCEP is working with Linde Material Handling to introduce the new fleet, which will not only be powered solely by renewable electricity, but is also more efficient and safer to operate. The new MHE can be charged quickly without having to remove the battery from the machine; a full charge now takes just 2 hours, rather than the 8 hours required by the current fleet. Alternatively, top up charges can be completed during break times. This means not only that they require less electricity to charge, but also deliver a significant increase in efficiency in a fleet that operates for more than half a million hours each year.

The fleet is also much easier and more comfortable to operate, and comes equipped with Linde Safety Guard, an innovative monitoring system that increases safety for truck operators and pedestrians in the vicinity of the truck. 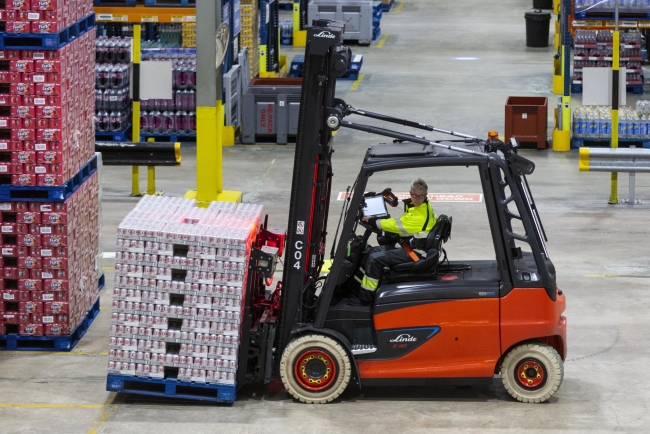 The sustainability drive forms part of CCEP’s This is Forward sustainability action plan, which targets six key social and environmental areas where the business has a significant impact. CCEP has committed to accelerate the decarbonisation of its business by reducing absolute greenhouse gas (GHG) emissions across its entire value chain – including scope 1, 2 and 3 emissions. It has also set a path to become a net zero business by 2040 in alignment with a 1.5˚C pathway and the Paris Climate Agreement. This is supported by a three-year €250m investment.

Stephen Moorhouse, vice-president and general manager, Coca-Cola Europacific Partners (GB), said: “With the major climate conference COP26 taking place at the moment, all businesses need to go further to reduce their environmental impact and help the UK government achieve its net zero targets. For Coca-Cola Europacific Partners, that means not only ensuring that we’re using more sustainable materials in the products we sell, but also by making the significant reductions in emissions from our own operations that this project will help deliver.”

Frank Denvir, leading the project for Coca-Cola Europacific Partners (GB), added: “This is a really significant step in making our GB bottling and distribution operations cleaner, greener and more efficient. It’s been great to work with Linde to find a solution that will deliver a significant carbon reduction across our GB sites, whilst also improving the safety and usability of the machines for our hard-working teams.”