I understand
Home••Babcock to create 500 jobs...

Babcock, the defence, security and aerospace company, has unveiled plans to recruit 500 workers for its Type 31 frigate programme, after recently completing the build of its new state-of-the-art assembly hall, The Venturer Building, at its Rosyth site.

Measuring an impressive 147m x 62m x 42m, The Venturer Building will initially be used for the assembly of the Royal Navy’s Type 31 frigates, providing a facility that can support UK and international shipbuilding activity for decades to come. As the Type 31 programme continues, the fully covered hall will house two frigates for uninterrupted, parallel assembly and will support increased productivity gains through improved access to the platforms and digital connectivity. 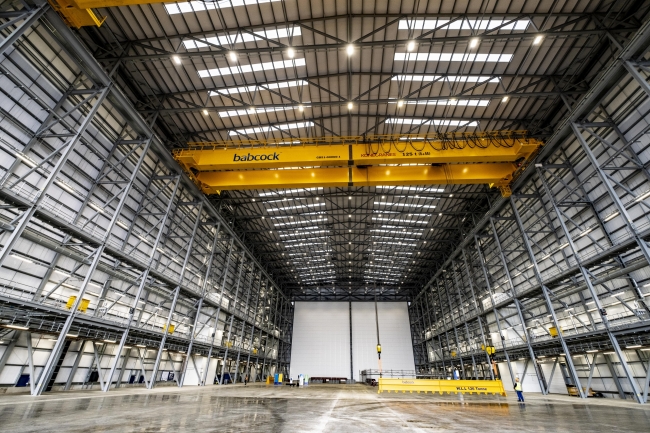 Babcock is to recruit 500 workers for its Type 31 frigate programme after completing the build of its new assembly hall in Rosyth / Picture: Babcock International

The initial recruitment drive to support the programme will include a variety of trades including welders, fabricators and mechanical and electrical fitters as well as production support operatives. The announcement sees the 500 new roles contribute towards the direct workforce which will peak at the height of the programme at around 1,250 people across the UK, and will support a similar number in the extended supply chain.

Further opportunities will include operations production management, quality and planning.

Will Erith, chief executive of Babcock Marine, said last week: “We are delighted to mark St. Andrew’s Day by celebrating the completion of The Venturer Building which builds on our exceptional heritage in Scotland, delivering a very real step change in capacity and capability for modern UK shipbuilding.

“From the start of this programme we’ve been focussing on prosperity, supporting both the UK and local economies and so it is great we are also announcing 500 new roles on the same day who will directly support the Type 31 programme.

“I would like to thank everyone involved in the construction of this fantastic building and especially our contractors Robertson Construction. This moment demonstrates further progress in the Type 31 programme and adds to the significant investment over the last decade at our facilities in Rosyth; bringing advancements and efficiencies into manufacturing, build and assembly processes.”