HS2 has begun production of 1,000 enormous concrete segments that will form the deck of the Colne Valley Viaduct – the UK’s longest railway bridge.

The deck segments – which weigh up to 140 tonnes – are being made on site at a temporary factory built specifically for the project. The 100m long building, which is visible from the M25, has an internal volume of 105,000 cubic metres – making it larger than the Royal Albert Hall.

Stretching for 2.1 miles (3.4km) across a series of lakes and waterways just outside London, the viaduct will carry high-speed trains as part of the HS2 project, designed to improve rail links between London, Birmingham and the north of England, boost the economy and provide alternative low carbon travel options. 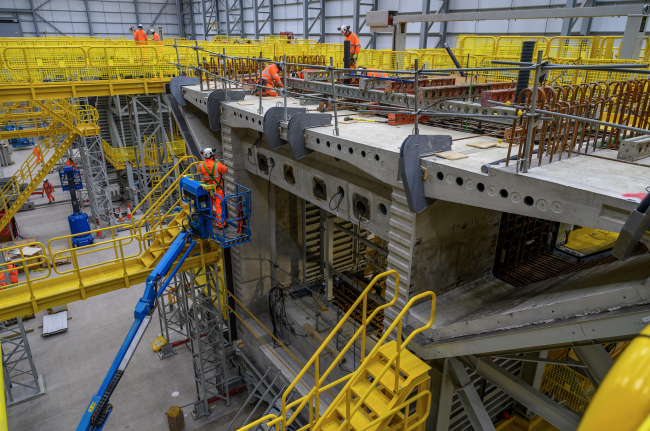 HS2 has opened its new factory and begun production of 1,000 concrete segments that will form the deck of the Colne Valley Viaduct – the UK’s longest railway bridge / Picture: HS2

At the peak of construction, around 12 segments – each the size of a double-decker bus – will be cast every week using a match-casting technique. This approach, where each segment is poured against the previous one, will ensure the whole arch fits perfectly when reassembled on site.

HS2 project client, David Emms, said: “We’re already making strong progress on the Colne Valley Viaduct – sinking the foundations, building the first piers, and now starting production at the new modular viaduct factory. Once complete, this iconic structure will carry trains at up to 200mph – improving connections across the UK, freeing up rail capacity and offering passengers low carbon travel options. It’s great to see how much progress has been made and I look forward to seeing work on assembling the deck structure later this year.”

Every segment will be a slightly different shape depending on where it fits into the viaduct and the modular approach was chosen to ensure quality, safety and efficiency in production and to avoid bringing them in by road. The project is being led by engineers from HS2’s main works contractor Align JV – a joint venture between Bouygues Travaux Publics, Sir Robert McAlpine, and VolkerFitzpatrick.

Once construction is complete, the factory and surrounding buildings will be removed and the whole area between the viaduct and the Chiltern tunnel will be transformed into an area of chalk grassland and woodland as part of HS2’s green corridor project. 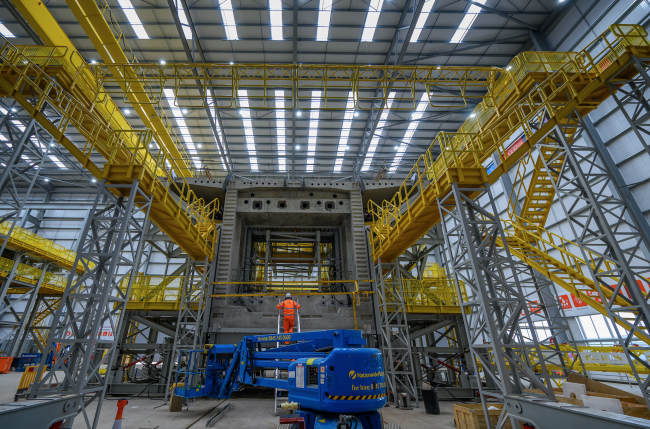 At the peak of construction, around 12 segments – each the size of a double-decker bus – will be cast every week / Picture: HS2

Work has also begun on 56 giant piers that will support the viaduct, working from north to south. Weighing in at around 370 tonnes, the first 6m tall reinforced concrete pier was cast on site by a team of engineers who used a specially-designed formwork to create the shape of the structure. This was then removed after 4 days to reveal the final product.

Each pier is designed to support the full weight of the deck above and rests on a set of concrete piles going up to 55m into the ground. This foundation work began earlier this year and will require the construction of 292 piles and 56 pile caps across the whole length of the viaduct.

Once complete, the team will then use a specialised launching girder resting on top of the piers to lift the deck segments into position.

In another visible sign of progress on the project, the team have also completed the construction of the first two of four jetties across the lakes to get equipment into position to support the construction. Where the viaduct crosses the lakes, the piles are being bored directly into the lakebed, using a cofferdam to hold back the water while the pier is constructed. 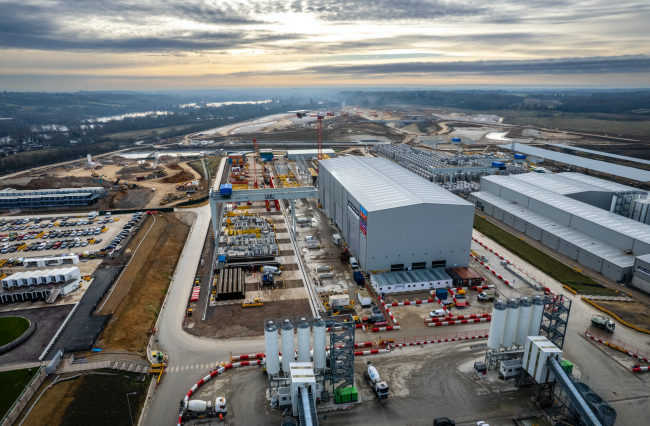 Once construction is complete, the factory and surrounding buildings will be removed, with the area being transformed into grassland and woodland / Picture: HS2