The UEV represents a dramatic carbon and cost saving versus replacing current vehicles with new electric equivalents with upcycling, remanufacturing and electrification playing a vital role in plotting a more economically and ecologically viable course to global fleet decarbonisation. This also addresses significant capacity deficits versus demand for the production of new EV industrial vehicles.

Lunaz is taking an approach proven in the remanufacturing and electrification of passenger vehicles through its Lunaz Design classic cars business. It applies this methodology to an industry with a global requirement to transition sustainably to clean-air powertrains at pace and at enormous scale. 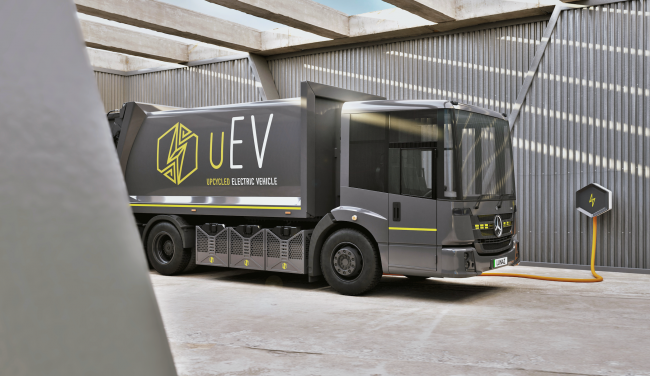 Lunaz has unveiled its first upcycled industrial electric vehicle – it plans that 1,100 vehicles will roll out of its Silverstone facility every year / Picture: Lunaz

An environmental audit commissioned by Lunaz and performed by leading scientists and engineers confirmed that more than 80% of embedded carbon over total lifetime is saved when upcycling rather than replacing an existing refuse truck with a new EV equivalent. Lunaz will deliver a fully upcycled, re-engineered refuse truck built to a near zero-mile standard to councils and waste management companies for broadly the same price as a new diesel equivalent and considerably less expensively than a new electric-powered refuse truck.

Before the diesel engine is removed and replaced with the Lunaz modular electric powertrain, every industrial vehicle that undergoes Luanz’ remanufacturing and electrification approach is fully upcycled. This includes a full bare-metal restoration. This means fleet operators are presented with a vehicle in factory new condition. Lunaz develops all its software in-house. This ensures end-users are presented with a vehicle equipped with the latest safety and control equipment. This includes the replacement of wing-mirrors with camera equipment and latest blindspot protection through side-facing RADAR and 360 birds-eye view cameras to increase awareness of surroundings and safety of workers when manoeuvring.

Lunaz’ senior engineering team have personally participated in refuse collection rounds to understand the requirements of waste collection operators. This has built a fundamental understanding of the very specific features and design elements they require. For example, they received almost universal feedback that passenger seats within existing OEM refuse trucks were very uncomfortable.

Lunaz Applied Technologies, the company’s R&D, engineering and development arm has been readying the company’s first industrial vehicle offering from its foundation in 2018. This will be remanufactured, re-engineered and electrified Mercedes-Benz Econic platform vehicles for uses including as refuse trucks, commercial hauliers and for specialist applications in off-highway settings including airports.

This approach exposes the company to a potential market of 80 million existing ICE-powered vehicles in this class alone that will require either conversion, replacement or scrapping in the face of global legislation that either punitively taxes or will serve outright bans on the use of these vehicles over the next decade. 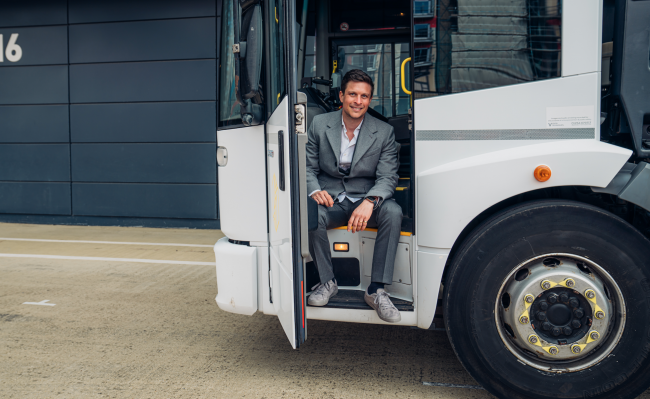 In December, Lunaz said it would grow its manufacturing footprint by 400% and create 300 jobs at Silverstone to re-engineer and electrify specialist industrial vehicles / Picture: Lunaz

Lunaz has also reaffirmed its commitment to the production of UEVs in Silverstone due to the region’s proximity to a highly-skilled workforce, diverse supply chain and culture of innovation, in particular surrounding the development of new clean-air powertrains like the modular EV solution developed by Lunaz Applied Technologies. Lunaz plans that, in total, more than 1,100 UEV industrial vehicles will roll out of the Silverstone facility every year.

Jon Hilton, managing director and technical lead, Lunaz, said: “I am proud to further the technology I developed taking hybrid and electric powertrain systems from Formula 1 into mainstream automotive and industrial vehicle uses. At Lunaz, we have gathered an extraordinary technical team to create a robust and modular electric powertrain solution that can be applied to multiple industrial vehicle applications. I am delighted that we can create true global impact in reducing cost and carbon burden for governments and companies as we collectively transition to clean-air powertrains.”

The company will make the first industrial vehicle deliveries in Q4 2023 and has already signed major fleet electrification agreements with councils for the conversion of refuse truck fleets to clean-air powertrains.