British space company Skyrora has opened a new manufacturing and production facility in Cumbernauld, the largest of its kind in the UK. After recently opening its engine test facility in Midlothian, this new facility allows the company to concentrate its launch development practices in custom-built domestic facilities.

The production of two Skyrora vehicles has already commenced at the Cumbernauld site, which will increase up to 16 per year once mass production begins. The site boasts unique capabilities for space infrastructure in the UK, as certain tests that would typically be outsourced to facilities in other countries can now be conducted domestically.

For the very first time, the UK has an asset capable of conducting full-stage structural and pressure testing and full-stage functional and cold flow testing. Conducting these tests domestically saves significant time and costs, and represents a key advantage for UK space efforts. As such, the maiden testing of the second stage of the Skyrora XL rocket can now be performed from UK soil, having been fully manufactured and assembled in-house. This includes the assembly of the 70kN engine, the most powerful commercially-produced liquid engine in the UK, which has been built using 3D-printed engine components. 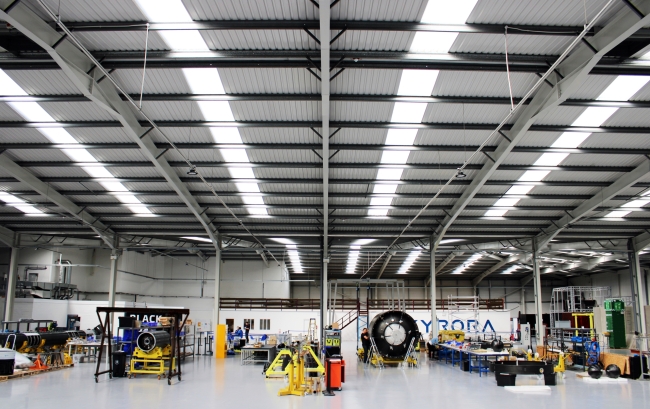 British space company Skyrora has opened its new rocket manufacturing facility in Cumbernauld – the largest of its kind in the UK / Picture: Skyrora

In a critical milestone for the development of the Skyrora XL, the hot fire testing will see the second stage attached to a stand at the newly-opened Midlothian test facility as the engine simulates a real launch. This enables important telemetry data to be collected and analysed on-site. As a three-stage launch vehicle, the second stage of Skyrora XL will start its engines at approximately 62km before releasing the third stage at around 190km for orbital launch.

The Skyrora vehicle assembly building in Cumbernauld consists of 55,000 sq ft of factory floor and office space, along with a 67,000 sq ft yard large enough to contain the entire Skylark L launch complex and future Skyrora XL launch facilities, for rehearsals, integration works, and launch preparation. Altogether, the facility roughly equates to the size of two standard football pitches and can accommodate up to 16 Skyrora XL vehicles for assembly, integration, and launch per annum. The site will also generate new employment opportunities both in the North Lanarkshire area and in the rest of Scotland, accommodating up to 100 technical and business roles.

Skyrora’s head of engineering, Dr Jack James Marlow, said: “This purpose-built manufacturing and assembly site, combined with the Midlothian testing facility, allows Skyrora to take direct charge of the development cycle in-house. As a business, we now have a full set of domestic facilities to allow for close control of the quality and rapid development and testing of Skyrora XL ahead of its demo launch. The site will also allow us to further optimise manufacturing processes developed by our colleagues in Ukraine and scale-up launch vehicle production in the long term, enabling further expansion and growth in the future.”

Skyrora says its readiness to enter mass production comes at a pivotal time in the UK space race, as the company endeavours to become the first British company to launch a rocket from UK soil with its orbital vehicle, Skyrora XL. By 2030, Skyrora aims to conduct 16 launches per year from SaxaVord launch complex in the Shetland Islands alone. 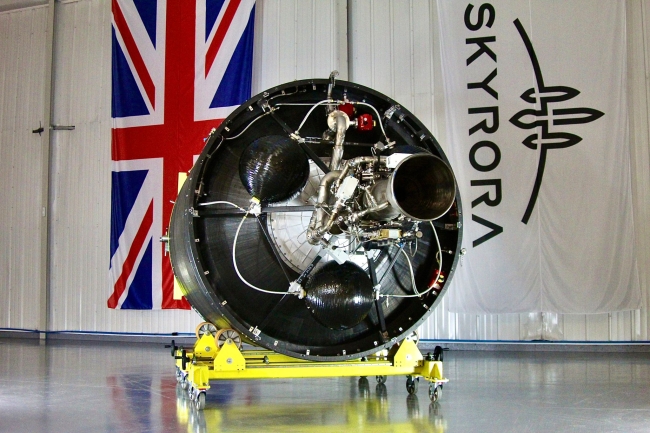 Skyrora continues to gear up for launch, with production commencing on three rockets at the new Cumbernauld facility / Picture: Skyrora

Skyrora founder and CEO, Volodymyr Levykin, added: “To play a significant role in the emerging global space economy, the UK has to develop sovereign launch capabilities. This isn’t just about offering different locations for launch, but everything that precedes that moment. Being able to offer end-to-end domestic capabilities from development, manufacturing, testing, and launch provides the UK with a crucial advantage as it looks to unlock its capabilities and deliver on its potential on the global stage. This crucial asset would not have been possible without the dedication and talent of the entire Skyrora team, both here in Scotland and in Ukraine.”

The Cumbernauld manufacturing and production facility has been made possible in part by the support and collaboration with the UK Space Agency (UKSA) and the European Space Agency (ESA), who both share in Skyrora’s vision for the future of launch capabilities and assured access to space from these shores.

Ian Annett, deputy CEO of the UK Space Agency, said: “As we approach the UK’s first commercial space launch this summer, Skyrora’s new manufacturing and production facility in Cumbernauld will further enhance the UK’s reputation as Europe’s most attractive destination for launch activities. Scotland is home to around one-fifth of all space jobs in the UK and, by harnessing the opportunities provided by commercial spaceflight, we are creating highly skilled jobs and local opportunities in Scotland and across the country.”

Capacity will increase up to 16 rockets per year once mass production begins, with the site eventually becoming home to 100 employees / Picture: Skyrora