UK commercial vehicle production grew by 10.7% in October, with 8,740 vans, buses, trucks, coaches and taxis rolling off British factory lines, according to the latest figures released by the Society of Motor Manufacturers and Traders (SMMT). Output in October was the highest for the month since 2019, as production volumes increased to round off 10 consecutive months of growth this year.

Exports continued their double-digit rise, increasing by 50.2% to 5,905 units thanks to strong demand from overseas markets. Some 5,579 units were destined for Europe (94.5% of exports), with SMMT saying this is evidence of how the continued success of Britain’s commercial vehicle manufacturers is contingent on suitable trading terms, and a globally competitive business framework, which will bolster operator confidence. Meanwhile, production for the UK fell, down -28.4% compared with the same month last year, as firms focused on fulfilling strong export orders. 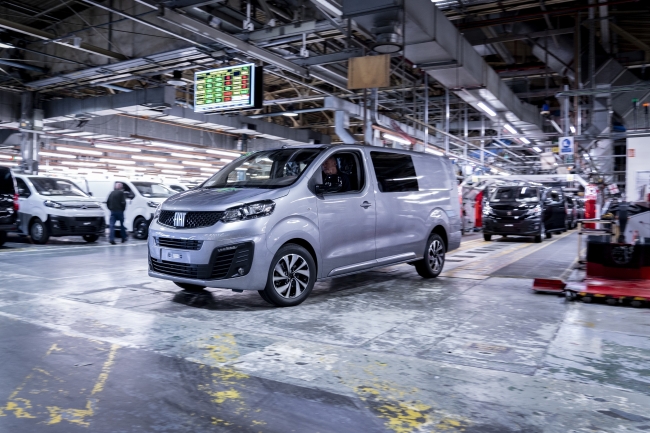 UK commercial vehicle production grew 10.7% in October, with 8,740 vehicles leaving British factories – the tenth consecutive month of growth and the best ten months of a year since 2012 / Picture: Stellantis

Even as UK commercial vehicle manufacturers have juggled turbulent global supply chains, overall production is up 45.5% year-to-date, with 85,547 CVs built in Britain since January. Robust overseas demand means that exports have risen by 70.0%, to 51,271 units so far this year, while production for domestic buyers is up a more modest 19.6%, to 34,276 units. To date, 2022’s performance represents the best 10 months of a year since 2012 and is some 19.3% higher than the pre-pandemic five-year average.

In addition, UK car production returned to growth in October, rising 7.4% to 69,524 units, according to the latest figures published by the SMMT. The rise followed September’s fall, which came after four consecutive months of growth, illustrating how supply chain turbulence, in particular global chip shortages, continues to affect UK car manufacturers. Although positive, with production for both home and overseas markets up 12.5% and 6.3% respectively, October’s performance was still below pre-pandemic levels with the SMMT underlining the scale of recovery for car manufacturing that is still needed.

Mike Hawes, SMMT chief executive, said: “Another month of growth for CV manufacturers is good news for the wider industry as it shows how the UK is well placed to build high-quality vehicles which support jobs, growth and exports. While the industry looks to 2023 with some optimism, we cannot be complacent as sustained long-term growth is dependent on favourable operating conditions and a competitive framework for automotive manufacturing.

“A return to growth for UK car production in October is welcome – though output is still down significantly on pre-Covid levels amid turbulent component supply. Getting the sector back on track in 2023 is a priority, given the jobs, exports and economic contribution the automotive industry sustains.”