I understand
Home•Allianz Risk Barometer – what...

Allianz Risk Barometer – what to focus on

Allianz have published their latest report focusing on which risks businesses should be most focused on. We take a look at the highlights and what manufacturers should have on their agenda.

Companies increasingly worry about the unpredictable business environment where markets are volatile (#2) and political perils, such as protectionism or terrorism are on the rise. Other growing concerns are digital dilemmas arising from new technologies and cyber risks (#3), as well as natural catastrophes (#4). However, what continues to trouble them most, are losses from business interruption (#1). These are the key findings of the 6th annual Allianz Risk Barometer analyzing corporate risks globally, as well as by region, country, industry and size of business.

Business interruption (BI) continues to lead the ranking for the fifth year in a row (37% of responses), primarily because it can lead to significant income losses, but also because multiple new triggers are emerging, especially non-physical damage or intangible perils, such as cyber incidents, and disruption caused by political violence, strikes and terror attacks. This trend is driven, in part, by the rise of the “Internet of Things” (IoT) and the ever-greater interconnectivity of machines, companies and their supply chains which can easily multiply losses in case of an incident. Companies are also facing potential financial losses with the changing political landscape (Brexit, Trump, upcoming EU elections etc.) leading to fears of increasing protectionism and anti-globalization.

“Companies worldwide are bracing for a year of uncertainty,” says Chris Fischer Hirs, CEO of Allianz Global Corporate & Specialty SE. “Unpredictable changes in the legal, geopolitical and market environment around the world are constant items on the agenda of risk managers and the C-suite. A range of new risks are emerging beyond the perennial perils of fire and natural catastrophes which require re-thinking of current monitoring and risk management tools.”

Market developments and volatility (31% of responses) is the second most important business peril in 2017 and the top concern in the aviation/defense, financial services, marine and shipping and transportation sectors, as well as across the Africa & Middle East region in general. In order to anticipate any sudden changes of rules that could impact markets, companies will need to invest more resources into better monitoring politics and policy-making around the world in 2017. According to trade credit insurer, Euler Hermes, a subsidiary of Allianz SE, since 2014, there have been 600 to 700 new trade barriers introduced globally every year.

At the same time, increasing reliance on technology and automation is transforming, and disrupting, companies across all industry sectors. While digitalization is bringing companies new opportunities, it is also shifting the nature of corporate assets from mostly physical to increasingly intangible, bearing new hazards, above all cyber risks (30% of responses).

Cyber threats were ranked by comapnies a close #3 globally, climbing to #2 across the Americas and Europe and the top risk in Germany, the Netherlands, South Africa and the UK. At the same time, it is the top concern globally for businesses in the information and telecommunications technology and the retail/wholesale sectors.

The threat now goes far beyond hacking and privacy and data breaches, although new data protection regulations will exacerbate the fall-out from these for businesses. Time is running out for businesses to prepare for the implementation of the new General Data Protection Regulation across Europe in 2018 – although the cost of compliance will be high, the penalties of not doing so could be even higher. Meanwhile, increasing interconnectivity and sophistication of cyber-attacks poses not only a huge direct risk for companies but also indirectly via exposed critical infrastructures such as IT, water or power supply. Then there is the threat posed by technical failure or human error, which can lead to long-lasting and widespread BI exposures. In the digitalized production or Industry 4.0 environment, a failure to submit or interpret data correctly could stop production. Businesses need to think about data as an asset and what prevents it from being used. Results also show that smaller companies may be underestimating cyber risk: in this category (revenues <€250 million), cyber ranks only #6. However, the impact of a serious incident could be much more damaging for such firms.

Natural catastrophes (#4) and climate change/increasing volatility of weather (respectively 24% and 6% of responses) also rank high on the agenda of businesses this year, particularly in Asia where the costliest disaster globally of 2016 occurred – the Kumamoto earthquake (Japan). Natural catastrophes rank as the top concern in Japan and Hong Kong, as well as globally among engineering/construction companies.

“Natural catastrophes and climate change worry our customers and society at large,” says Axel Theis, Board Member of Allianz SE. “We must assume that global warming above 1.5 degrees Celsius would intensify climate damages, for example from heat waves and rising sea levels, significantly. It is our task as an insurer to develop solutions for these scenarios and establish prevention and insurance protection for, and together with, our customers and public partners.”

• Business interruption continues to lead risk rankings as new non-physical damage triggers emerge • Companies greatly fear the impact of rising protectionism and other potential shocks to markets
• Cyber risk concerns rise to 2nd in the US and Europe, globally top 3; driven by impact of indirect attacks, regulatory threats and technical and employee error in digitalized production environment
• Impact of cyber incidents is the top concern for businesses in the UK for the second year in a row.
• Uncertainty over Brexit and the Eurozone is a much bigger risk concern year-on-year in the UK, rising to 5th position following the June 2016 referendum

You can access the full report, for free, by following this link: Allianz Risk Barometer 2017 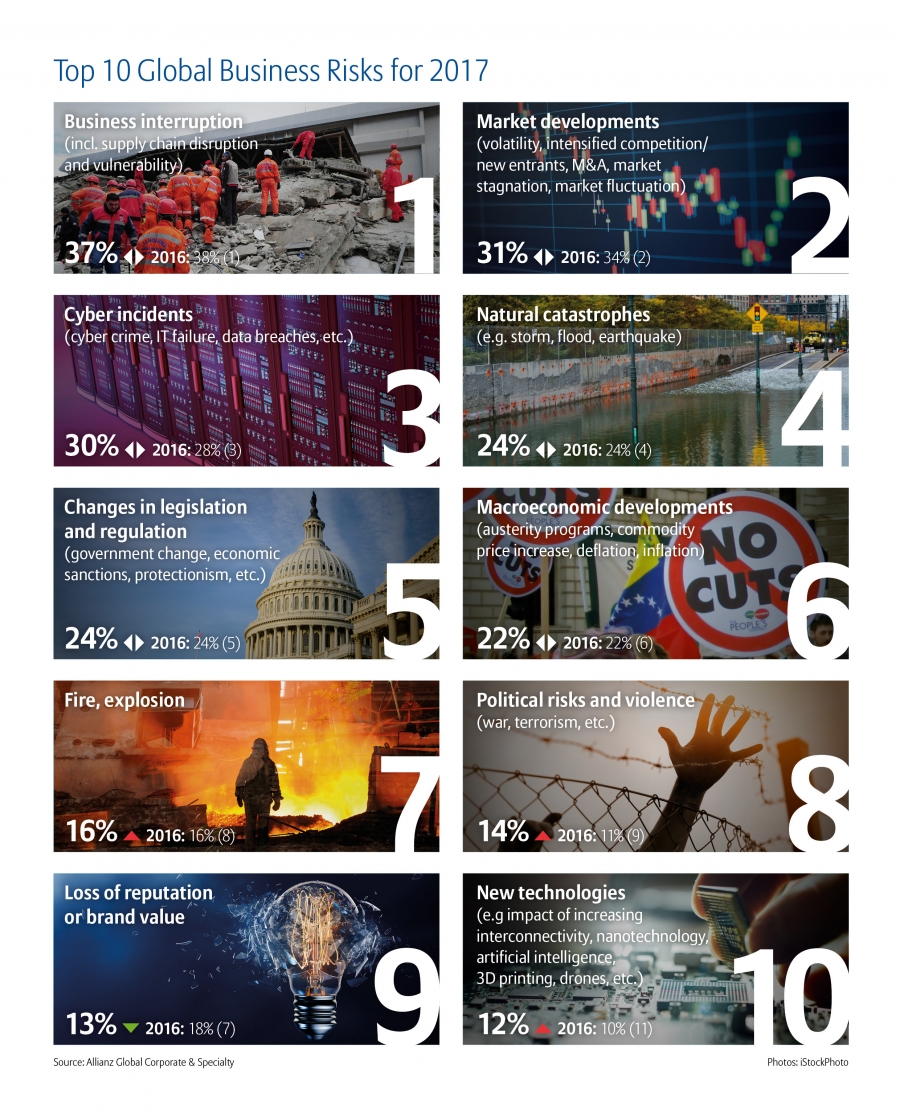