An Atlas Copco oxygen generator is helping Nat-Ur-Gas Solschen produce clean methane at their biogas plant in Germany. Desulphurisation of biogas using oxygen results in a sustainable energy source for the grid. An added benefit is the reduction in operating costs through improved energy efficiency – by up to 50%. The use of a Variable Speed Compressor from Atlas Copco also allows tight control of oxygen content below the lower explosive limit, thus ensuring the safety of the plant.

Heinrich Schaper and Michael Klawitter of Nat-Ur-Gas Solschen GmbH & Co. KG commissioned Bioconstruct GmbH, based in Melle, to design and build their biogas plant in 2016. The plant currently produces 1500 m3 of biogas per hour with an average methane content of 53%. This biogas is continuously concentrated to a methane content of 94% in a treatment plant via membranes. “Every hour, we feed 700 cubic meters of biomethane into the gas supply system,” says Klawitter. The biogas is sold to the Munich energy supplier BayWa via a long-term purchase agreement.

The heart of the Bioconstruct biogas process is the fermenters where bacteria feed on organic material to produce biogas. Their two fermenters each require 3.5 tonnes of fresh biomass or substrate every hour. Sustainability is a key feature of the business model, as substrate is sourced from local farmers and fermentation residue is supplied back as a fertiliser. 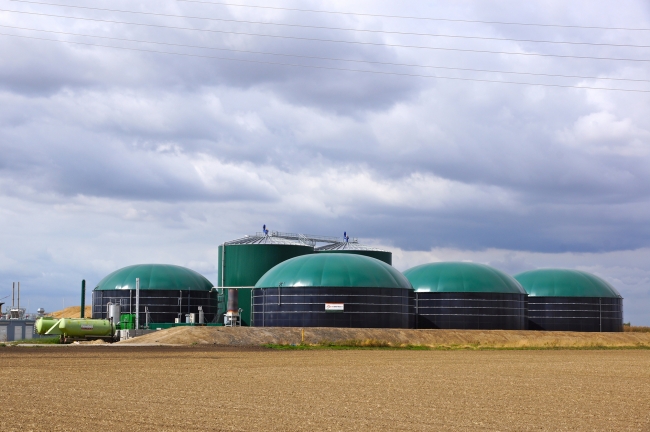 Atlas Copco installed an oxygen generator at the biogas plant in Solschen, Lower Saxony, which produces biogas with an average methane content of 53% / Picture: Atlas Copco

“The biggest problem in the production of biogas is the resulting hydrogen sulphide,” explains Klawitter. “Firstly, it makes the filters in the treatment plant stick together. And secondly, it is converted into sulphur dioxide during combustion of the biogas and causes corrosion in fittings and motors. So, we need to try and eliminate as much hydrogen sulphide as possible from the gas.”

The Solschen-based company chose the biological desulphurisation method. In this process, hydrogen sulphide is converted into elemental sulphur and water by special bacteria in the fermenter with the addition of air or oxygen. The sulphur remains in the fermentation residue and increases its fertilizer value, while the purified gas can pass through further processing stages.

“We made a conscious decision to choose desulphurisation with oxygen,” explains Klawitter. “Because unlike desulphurisation with ambient air, we can precisely control our O2 generator. This gives us full control over a number of factors, like explosion protection. We know that we have an O2 content of 94 per cent and can dose the addition of oxygen in such a way that we are definitely always below the lower explosion limit of 2.3 percent.” The oxygen is blown into the fermenters from above. Together with the biogas, it is distributed under the domes of the hemispherical fermentation residue storage areas.

Atlas Copco’s trading partner D & N Drucklufttechnik GmbH & Co. KG, also based in Melle, planned and implemented the oxygen supply system. It consists of an oil-injected, speed-regulated GA 11 VSD+ screw compressor, an OGP 8-type O2 generator, a storage tank for compressed air and oxygen, as well as the necessary filter stages for compressed air and O2 processing. Compressed air passes through an activated carbon filter, an oil separator and a dirt trap into a storage tank at a pressure of 10 bar. From there, the O2 generator is fed, which enriches the air to an oxygen content of 94%. The oxygen finally reaches the fermenters via another buffer tank and two electronic flow meters.

“We currently blow an average of nine cubic meters of oxygen per hour into the fermenters,” says Klawitter. The instantaneous flow rate fluctuates between 6 and 11 m3 according to the amount of biogas produced so that the oxygen content never exceeds the lower explosive limit. The compressed air supply must therefore be flexible – one reason why Atlas Copco’s speed-regulated machine was chosen. The second major advantage of speed regulation is low energy consumption, which reduces operating costs. Atlas Copco’s GA-VSD+ compressors feature the latest generation of speed regulation and are equipped with particularly energy-efficient permanent magnet motors. The system saves 50% of energy costs compared to a full load/no load control system. 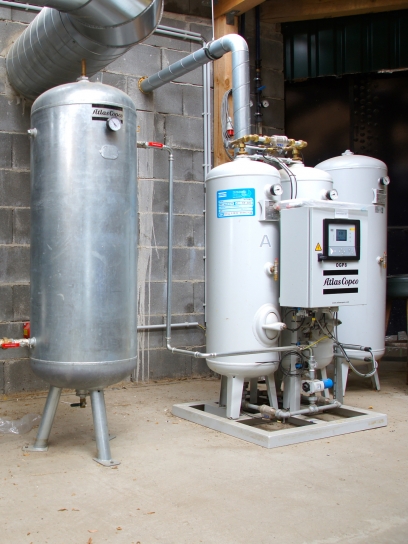 Desulphurisation of biogas also protects activated carbon filters upstream of the treatment plant. Without desulphurisation, the sulphur content of the raw gas would radically reduce the filter life, thus increasing operating costs. An added benefit is that the 0.4 to 0.5 % oxygen in the gas stream actually helps the activated carbon performance, keeping it fully effective. So critical is the oxygen supply to the Solschen plant that Nat-Ur-Gas Solschen are already working towards implementing a redundant solution.

Michael Klawitter also positively emphasises the Atlas Copco service. Service engineers restored the generator to service quickly and efficiently after a self-inflicted failure. They also supplied full instruction in the system engineering during the maintenance cycle without request.