Case Study: Advance Engineering cut costs by eliminating the use of a bottled gas supply

The broad range of output and engineering services supplied from the Kings Lynn-based company’s 1,250 square metre workshop is directed primarily towards the food processing industry. Apart from batch component machining capability and custom engineered products, it also covers pipework installations and on-site maintenance. But the company’s growth area is in fabrication services, which employs its skilled work force in sub-contract laser cutting and metal folding operations. It was to expand this capability that the decision was made to invest in new production equipment and to seek a more economic source for the supply of nitrogen gas. 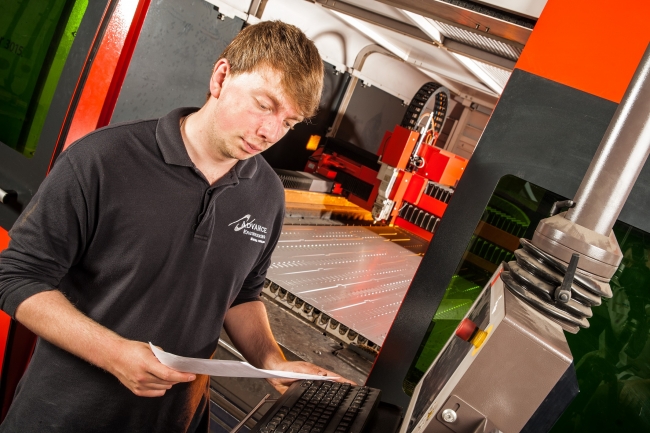 Sam Canfor, Advance Engineering’s Profile Manager explained: “We were successful in securing new equipment funding. It was delivered by the new Anglia Local Enterprise Partnership under the government’s Growing Business Fund whose grants cover up to 20 per cent of total project costs for local companies like ourselves who want to grow and create new jobs.”

Laser-cutting metal, particularly stainless steel, relies on a supply of nitrogen gas as a blanket to prevent burning during the process. Purity of the gas is an important factor in overcoming the tendency for discolouration of laser-cut edges and to provide a high-quality finish. Besides these technical considerations for Advance Engineering’s expansion project, it was equally important to achieve savings on the cost of delivered bottled nitrogen supplies; which was averaging close to £1500 per week.

After investigating all the available options, managing director Rob High and Sam Canfor decided that installing on-site nitrogen generation was the answer to both needs. It would deliver significant cost savings, maintain supply independence and ensure a continuous, reliable source of high purity nitrogen. 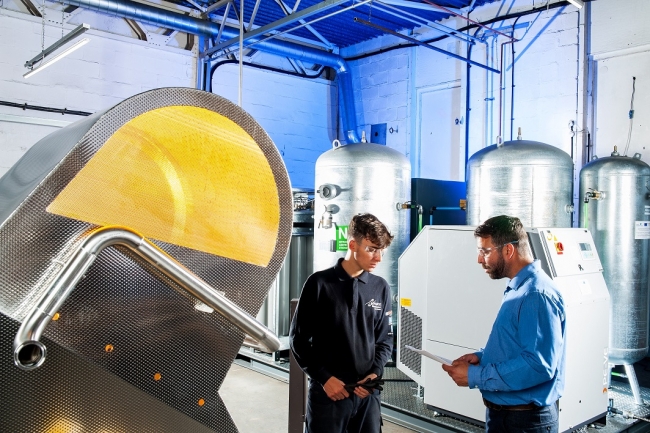 Advance Engineering has invested in an Atlas Copco on-site nitrogen generation system to ensure the quality of its laser-cutting operation / Picture: Atlas Copco

Anglian Compressors provided the solution by installing an all-in-one nitrogen generation assembly. The compact Atlas Copco Nitrogen N2 8 skid package comes complete with a GA VSD+ FF full-feature, rotary screw compressor, an NGP+ nitrogen generator, air and nitrogen receivers, plus a booster, dryers and filters, all fully integrated into one pre-commissioned skid unit. This true plug-and-play system’s 300-bar output of 99.99 per cent pure nitrogen, at the rate of 38 Nm3/h, can be switched either to receiver storage or high-pressure bottling in its 16-cylinder rack.

What’s more, the unit’ s energy-efficient components, that include a VSD+ permanent motor drive and NGP+ generator technologies, can offer more than 50 per cent cost savings in comparison to conventional on-site generation solutions. In addition, the generator’s low-volume, high quality absorbent medium provides optimum capacity to produce the nitrogen. Whereas other competitive systems require six volumes of air to produce one volume of nitrogen, Atlas Copco’s design requires a ratio of only four parts air to one part of nitrogen.

This volume reduction means the installation features a relatively smaller compressor with a smaller motor, thus reducing running costs. There is a corresponding reduction in the size of ancillaries also, such as filters and dryers, as less compressed air is used in the nitrogen production. This has the overall effect of reducing capital expenditure; as well as ongoing service costs.

Richard Hewitt, Managing Director of Anglian Compressors, added: “We become the service provider to Advance Engineering 6 years ago when they were looking for a local company to look after their compressed air system.  Over the years our relationship has grown, which is built on trust and advice on ways they can reduce energy and improve reliability.  This is reciprocal as we have used the servicing of Advance Engineering for fabrication work on some of our own projects because of the standard of workmanship they provide.’

Other notable features of the skid unit include automatic regulation of user-requested nitrogen pressure and purity, self-protected monitoring of the feed air temperature, pressure and dew point; as well as a stand-by mode for additional energy savings. 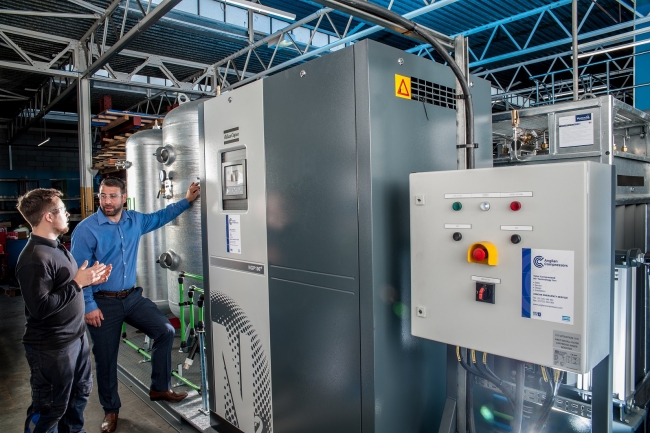 The investment has also enabled an increase in output and substantial cost savings when set against delivered bottled gas supplies / Picture: Atlas Copco

Sam Canfor summed up the advantages conferred by the new generation system: “The new unit now gives us a reliable independent source of high purity nitrogen at the lowest cost. We are in full control and have eliminated the need, costs and hassle of ordering, transportation and delivery of bottled gas to our site. As far as the skid installation was concerned, Anglian Compressors and Atlas Copco made sure that there was minimum interruption to our production. There was literally just a smooth changeover from our existing bottled nitrogen supply to instant start up on the skid unit.”

He went on to say that not only did the project add to the company’s green credentials, but the new production economies meant an investment pay-back in the region of 18 months. Furthermore, the available capacity of the system would allow for any future extension of the workshop’s compressed air and nitrogen network.

The N2 Nitrogen Skid, which is also available in a 40-bar version for direct operation, complements Atlas Copco’s existing range of on-site gas solutions, including both nitrogen and oxygen generators. Its nitrogen generators are available in both membrane and PSA technologies and are offered as low-investment entry models and high-end versions that both ensure a low total cost of ownership.