Laser metal cutting and fabrication specialists, LaserMaster has switched from bulk delivery of nitrogen, essential for the process, to an Atlas Copco on-site, high pressure nitrogen generation container unit. A move that ensures a continual, unlimited supply of high purity nitrogen, independent of bulk deliveries, and saves the company around £2,500 a month. 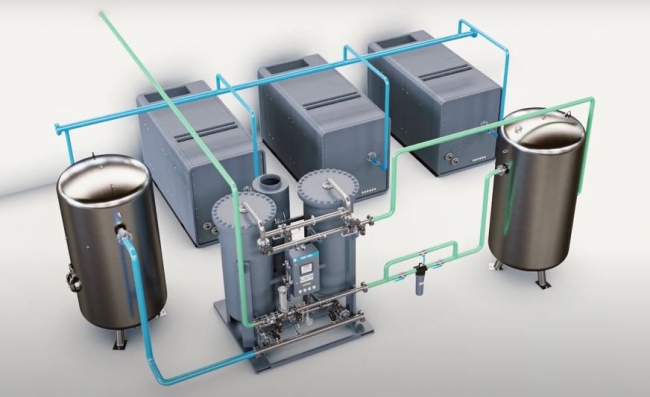 Laser-cutting metal relies on a continuous supply of nitrogen gas as a blanket to prevent burning during the process. Purity of the gas is an important factor in overcoming the tendency for discolouration of laser-cut edges and to provide a high-quality finish. As well as these critical process requirements, it was important for LaserMaster’s production management to achieve savings on the cost of delivered bulk nitrogen supplies.

For the past seven years, LaserMaster has had a bulk nitrogen supply agreement in place and was renting an on-site storage tank. The perceived benefits of this approach were: a large storage facility with the required nitrogen quality; a scheme cheaper to run than delivered bottled gas; no large capital outlay was involved; and there were regular deliveries from the supplier.

However, for all these advantages there were evident drawbacks to the scheme. Rental costs were in the order of £8,000 p.a. and long contracts with 12 months’ minimum notice were the norm. Other negative aspects comprised the company’s dependence on on-site deliveries, the percentage of tank losses, environmental carbon footprint issues, and, ultimately, the total cost of a nitrogen supply which was in the region of 35-40p per Nm3.

The alternative option of on-site generation had been considered for some while, but the decision had been put off by the apparent prospect of dealing with several separate companies in the supply of the equipment, the installation on site, and the subsequent servicing programme. As John Gotts explains: “We were just looking for a one stop facility, one company we could deal with to provide the nitrogen system and be responsible for its maintenance”.

LaserMaster found the solution in the proposal by Atlas Copco’s authorised distributor in the area, TSB Engineering whose South West sales, service, repair, and installation operates out of Bristol, and Callington in Cornwall. After reviewing LaserMaster’s current supplied usage figures, TSB recommended the option of an Atlas Copco HPN2 skid 8, on-site, high-pressure nitrogen generation containerised package. This was to be rented for an initial three-month period in order to compare performance and costs against the current supply facility.

The compact skid package came complete with a GA VSD+ FF full-feature, rotary screw compressor, an NGP100+ nitrogen generator, air and nitrogen receivers, plus a booster, dryers, and filters, all fully integrated into one pre-commissioned unit. The NGP+ generator’s low-volume, high quality absorbent medium provides optimum capacity to produce the nitrogen. Whereas other competitive systems require six volumes of air to produce one volume of nitrogen, Atlas Copco’s generator design requires a ratio of only four parts of air to one part of nitrogen, which results in lower overall running costs. 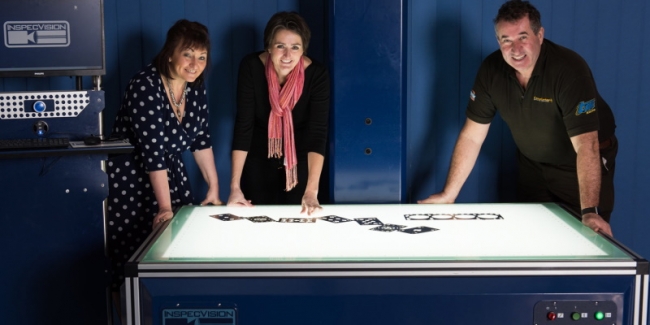 The nitrogen generator operates with Pressure Swing Adsorption (PSA). The system works by separating nitrogen and oxygen molecules within the compressed air stream feeding the unit. PSA does this by trapping the oxygen using adsorption techniques. Adsorption takes place when oxygen molecules attach to a carbon molecular sieve (CMS) allowing the smaller nitrogen molecules to pass through.

The trial unit is now a permanent installation, providing nitrogen for the two high production fibre lasers.  It delivers 42 Nm3/h of nitrogen and 480 Nm3 of storage at 99.99% purity. The purity quality of the delivered nitrogen is as per the contents of original site tank. This gives LaserMaster the option of reducing the quality of nitrogen relative to the material being cut, thereby increasing flow and reducing generation costs.

The switch to on-site nitrogen generation is estimated to save around £2500 per month when compared to the company’s previous bulk supply method, and now the total cost of nitrogen has been reduced dramatically − down to 4p per Nm3.

The container unit was installed at the rear of the company’s main building together with a power supply to an isolator. The production area’s nitrogen supply pipework was connected to the container with a flow valve to enable the use of the current tank option if required. An additional bottle bank has also been positioned adjacent to the container to provide even more storage capacity and creates an opportunity to expand output in the future.

John Gotts said: “We have invested for the future, firstly by taking delivery of one of the first Bystronic 4kw fibre optic lasers in the UK. This has enabled unparalleled high-speed parts production and first-class cutting quality. Now with our auto loader and a continuous and unlimited supply of nitrogen, we have the capability to cut metal 24/7 which means we can offer a fast turnaround on high volumes by operating throughout the night, allowing us to be more competitive on batch volume production.

“I am happy to recommend our new solution to any interested parties via phone or site visit”. In fact, the site has already been visited by a potential customer who is keen to move forward with the on-site generation option in order to replace a similar nitrogen bulk tank site installation. It is also possible to get an online 3D tour of the nitrogen generation container package.