By replacing its traditional lobe air blowers with modern Atlas Copco VSD rotary screw blowers, Scottish Water’s Nigg wastewater treatment works now achieves uninterrupted operation, with a reduced maintenance programme and savings of up to 25% in energy costs − plus the potential for further savings when the system is fully optimised.

The Nigg wastewater treatment works, located to the south-east of the City of Aberdeen on the shore of Nigg Bay, serves a population of 250,000. It is operated by Scottish Water Services (Grampian), who have a 28-year design, build, finance and operation contract with Scottish Water to operate and maintain four wastewater treatment plants serving the north-east of Scotland. In addition to treating wastewater, the company treats indigenous sludge and other liquid wastes.

Like many similar sites, it had been operating traditional lobe air blowers for the critical aeration processes in its Biological Air Flooded Filter (BAFF). In the process, a constant flow of low-pressure air is supplied by the blowers to BAFF media at the base of treatment tanks. This provides the oxygen required to sustain the organic bacteria that is treating the wastewater with each cell air scoured and back- washed once per day. 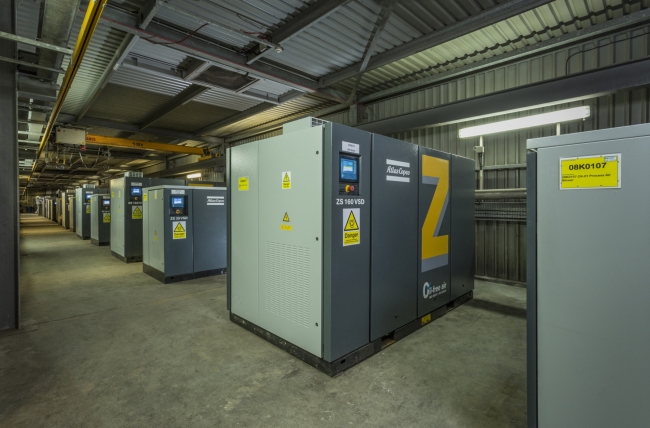 Scottish Water’s switch to VSD blowers saved 25% of energy costs for one of its wastewater treatment works / Picture: Atlas Copco

Blowers of the type in operation at the Nigg plant have been a constant area of concern and attention for the site maintenance team. As Graham Ellis, Asset Manager of Scottish Water Services, explained: “Our nineteen roots-type lobe blowers required intense levels of maintenance and were frequently unable to operate at the upper end of their performance range. There was also a high incidence of air and oil leakage to deal with. Overall, the process was running too close to the wire.”

There was also an energy cost consideration to take into account. With the majority of the blowers running 24/7, the BAFF process represents a significant share of the Nigg plant’s total energy consumption.

To remedy the situation, Graham Ellis and the management team undertook an asset-liability review to determine the equipment replacement options currently available to them: “We started off with seven blower providers, went through an elimination process, based on available technology. We then did an energy study to see who had the most energy-efficient and cost-effective solution to meet our needs at which point we decided to switch from roots blowers to screw blowers. This was followed up by a maintainability and totex model which came out strongly in favour of Atlas Copco’s offering.”

The replacement units are Atlas Copco ZS VCA VSD low-pressure, rotary screw blowers. Each comprises a complete, fully integrated package based on a simple internal principle: precision timing gears maintain minute clearances between two intermeshing dry screw elements that never touch. No lubrication is required in the compression space, and special seals stop any rotor bearing oil from entering the compression chamber. Intake air is compressed between the rotors and their housing and oil-free, pulsation-free air at a pressure band between 700-800 mbar is delivered at an output rate of up to 2272 m3h dependent upon process demand.

The plant’s original nineteen blowers of four sizes were reduced to seventeen Atlas Copco ZS VSD screw blowers of similar size. This comprised 11 x ZS30 machines and 6 x ZS160 units, all of which feature built-in inverter drives and Atlas Copco Mk5 control and regulation systems to maximise performance under a variety of conditions.

The reduction in the number of blower units has been enabled by the ability to use the extra capacity per blower and wide turndown function to match process demands. The Atlas Copco ZS machines can run at considerably reduced loads while delivering the same or larger volumes of air as the previous nineteen units did before. 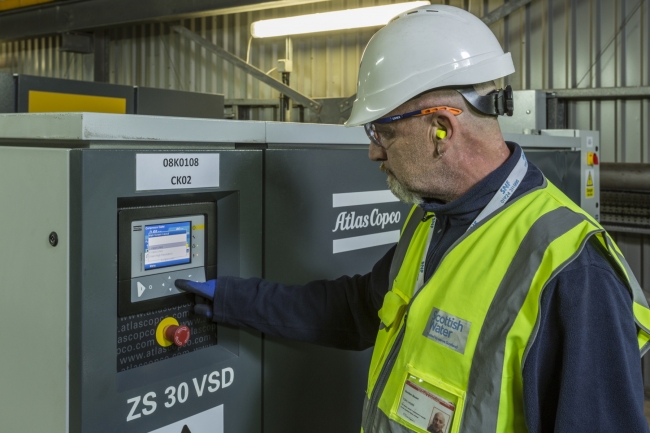 The phased installation and commissioning programme carried out by Design Air, an Atlas Copco distributor, took place over six months. When taken offline, a wastewater treatment cell needs from 12-18 hours to restore its operation. As a result, each of twenty cells had to be taken offline individually, in sequence and utilised the backup blower to minimise the risk to the technically sensitive process. Scottish Water was pleased that the planned process interruption was limited to just a half-day per cell.

As of now, the site is reporting around 25 per cent energy savings in aeration, with potential for further savings through DO (dissolved oxygen) control process optimisation. This is made possible by the ZS VSD screw blower’s turndown capabilities and superior internal air compression.

It has also enabled the Nigg plant to fully integrate all seventeen blowers into its SCADA system via Modbus protocols, utilising only two network cable runs and two Atlas Copco Mk5 Gateway units.

Such integration along with built-in independent individual control systems provides for full control and monitoring via SCADA, as well as for an emergency protocol for when those signals are lost. This ensures that every single blower can operate completely independently and could always revert to a pre-programmed operating point in case of primary signal loss.

Commenting on the success of the upgrade project, Graham Ellis had this to say: “Before this work, regular blower failures meant we were experiencing unacceptable process and compliance risks. Now, we can operate reliably at the plant’s design capacity while also using less energy. What’s more, we have gone from having to spend an average of 14 hours a week maintaining the blowers to just carrying out daily checks within our service contract. Working with Atlas Copco and the installers on this project has gone exceptionally well, and we have put the blowers under an Atlas Copco total responsibility service plan to ensure maximum uptime.”