Midlands-based WHS Plastics is recognised as a valued supplier, operating within a highly competitive global marketplace. The company operates across 3 sites and has 1,000 employees supporting major international companies, in a variety of industries including automotive, electronics, industrial and hygiene products.  The cutting edge injection moulding technology at the heart of the business enables WHS Plastics to deliver measurable benefits to their customers, and remain one step ahead of the competition.

In addition to its state of the art injection moulding technology, the company has also invested heavily in robotics and automation to support the moulding process. A large suite of Stäubli 6 axis robots perform a diverse range of tasks ranging from insert loading prior to moulding, to sophisticated post moulding handling and assembly operations, such as the assembly of trim clips to a tailgate moulding described here. 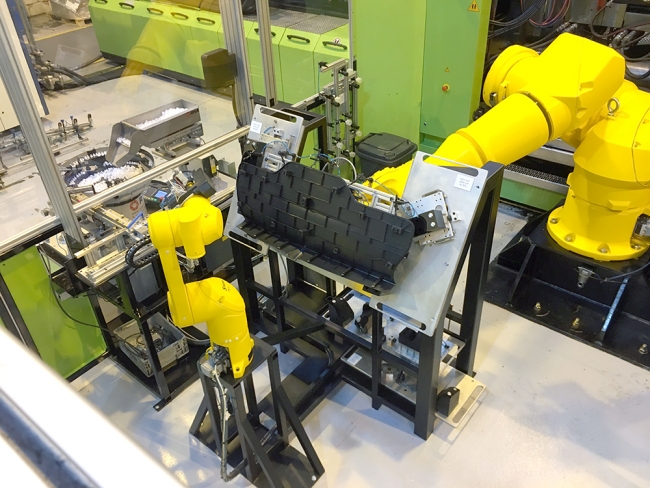 In addition to its state of the art injection moulding technology, the company has also invested heavily in robotics and automation to support the moulding process / Picture: Stäubli

The volume associated with the production of automotive parts means that there will undoubtedly be many repetitive tasks, as each component or sub assembly progresses to its final stage. In the case of injection moulded parts, and especially where additional process or assembly tasks may be required, 6 axis articulated robots have clearly demonstrated their ability to add value by performing a series of often complex post moulding operations directly at the mould press.  Such has been the success of this concept for WHS Plastics, that robots are now routinely ordered as part of a package with every new injection-moulding machine.

Further benefits from the use of robots are that they can also alleviate the problems sometimes encountered by manual operators, where the highly repetitive nature of the operation may ultimately cause physical strain, or be at the root of unintended errors. In addition, robots make it possible for operators to acquire new skills, such as managing the automated cell and perhaps performing quality control functions.

Manufacturing and supplying into automotive OEM’s requires the highest levels of quality and consistency, and this can only be achieved through the use of technology that is in itself robust, and capable of meeting the rigorous demands of this sector. Stäubli robots have a long established and enviable reputation for their speed, performance and reliability, attributes that were a key part in their selection by WHS Plastics for integration within their production facility.

The use of a six-axis robot, or in the case of this application, a pair of six axis robots, makes it possible to perform tasks which were traditionally either manually completed at the machine, or carried out within a separate workstation away from the moulding cell. In either case, the introduction of the robots at the moulding cell delivers significant benefits as all handling, post moulding and transfer operations are performed within the mould cycle without the need for any manual intervention. Further benefits include the fact that in process checks can be carried out during the post moulding operations, enabling a “no fault forward” approach to the process.

This production cell uses a Stäubli TX200 six-axis robot to remove a rear tailgate component from the injection-moulding machine. The robot then moves the part to an assembly fixture, where the component, whilst still retained by the gripper, is located and datumed for a clip assembly process. Trim clip components are presented from a bulk hopper and vibratory bowl feeding system situated within the cell. Each part is accurately located at an escapement before being collected by a second Stäubli six axis robot, in this case a TX60 model. The robot then proceeds to position and assemble multiple trim clips to the moulding.

On completion of the assembly operations, the TX200 robot, which has retained its grip on the part throughout the assembly process, then removes the part from the fixture and transfers it to an output conveyor. This cell, which is just one of a number of similar systems at WHS Plastics, makes use of both technology and manual resource, with man and machine performing the tasks that they are best suited to.

The introduction of robotics and automation is now seen as essential if plastics processors are to remain competitive, capture new markets, and increasingly add value to the products that they manufacture. However, for this strategy to be effective, a close working partnership between the plastic processor and the robot supplier is essential to ensure that both press side and down stream operations can be automated successfully.

The relationship between WHS Plastics and Stäubli spans some 20 years, and is firmly based upon ongoing mutually beneficial collaboration between the two companies. Stäubli’s understanding of the plastics sector’s unique requirements, together with the fact that the company offers 4 and 6-axis robotic arms specially designed for the plastics industry, will ensure that this partnership continues far beyond the existing 50 Stäubli robots already hard at work within WHS Plastics.