It’s the first time the car has been seen with its precision machined solid aluminium wheels, made specially to withstand the stresses of travelling at supersonic speeds, as it begins its high speed testing programme in the Hakskeenpan desert, Northern Cape, South Africa. For this first test session, the wheels will be tested at speeds up to and beyond 500 mph (800 km/h).

The tests will see the Bloodhound LSR car blasting along the Hakskeenpan desert racetrack for the very first time, providing a spectacular showcase of British engineering to a global audience. The Bloodhound team’s primary objective is to engage and inspire people of all ages through the most extreme application of science, technology, engineering and mathematics. 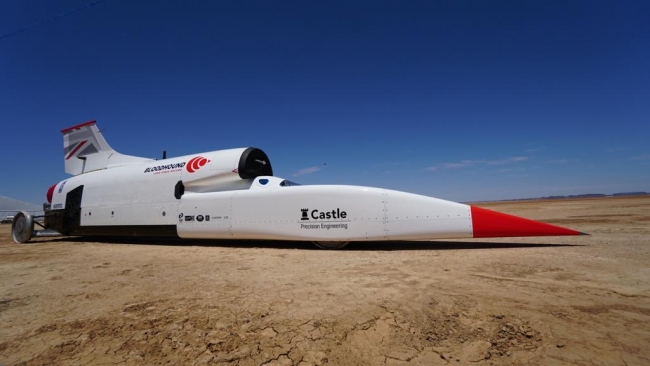 The world’s fastest straight-line car, powered by a state-of-the-art EJ200 Eurofighter Typhoon jet engine, was rolled out at the Bloodhound Technical Camp on the edge of the Hakskeenpan desert, and presented to Honourable Premier Dr Zamani Saul of the Northern Cape Provincial Government.

Slowing down to go faster

One of the key objectives of the high speed testing programme is, counterintuitively, to evaluate how the car behaves when slowing down and stopping from a number of target speeds, building up to and beyond 500 mph (800 km/h). Only once engineers and driver Andy Green are satisfied they understand the drag and stopping ability of the car will they push to the next run profile, building speed in each run by increments of 50 mph (80 km/h).

The Bloodhound LSR team will examine how much drag the car creates in a number of scenarios and at various speeds, using the wheel brakes, one or both of the drag parachutes, and with the giant airbrakes locked into position.

Data from 192 pressure sensors on the car will be monitored and compared against the predicted CFD (computational fluid dynamic) models to ensure they marry up. Bloodhound’s engineers will be working with Assistant Professor Ben Evans and Jack Townsend, from Swansea University, to check the data, which will reveal the amount of drag experienced by the car on each run. This data is critical to determine the size of the rocket that will be fitted to the car for the attempt to set a new world land speed record in 12 – 18 months’ time.

Mark Chapman, Bloodhound LSR Engineering Director, said: “Newquay was all about getting up to speed and finding out how quickly we could get the engine to full power and accelerate using max reheat. Andy was on the throttle for two seconds to reach 200 mph (322 km/h) in eight seconds. Here at the Hakskeenpan on a 10 mile (16 kilometre) track we can accelerate for much longer, achieve higher speeds and investigate the car’s stability, performance and drag, all crucial as we move towards setting a new world land speed record.” 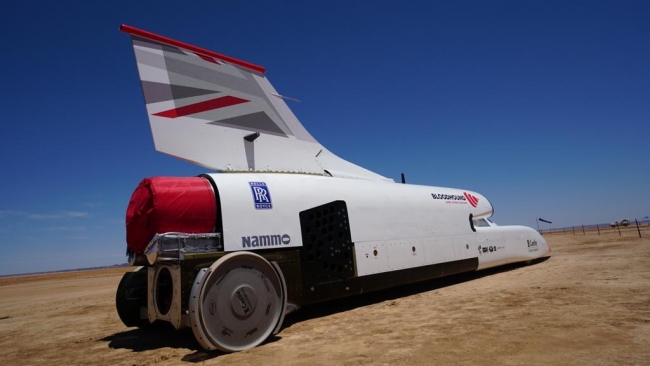 The world’s fastest straight-line car, powered by a state-of-the-art EJ200 Eurofighter Typhoon jet engine, was rolled out at the Bloodhound Technical Camp on the edge of the Hakskeenpan desert / Picture: Bloodhound LSR

One of the most cutting-edge pieces of technology employed by the Bloodhound team in the desert will be the Low Power Wide Area Network (LPWAN) IoT remote sensor array. Remote micro-climate weather stations will be located every 1 km along the 16 km track. These are battery-powered devices which record wind speed, gust speed, wind direction, temperature, humidity and barometric pressure. Since they send back data over a wireless network, they can be located anywhere and still operate, which is crucial in the desert with very little infrastructure.

Data is transmitted from the IoT sensor stations via a low power, long range radio network to a specially made data platform created by tech innovation company Digital Catapult, which converts the data into relevant and useable information used to understand changes in the weather which may affect the car.

This is vital in keeping Andy Green and the Bloodhound car safe. Cross winds in particular will affect the stability of the car at such high speeds.

Peter Karney, Digital Catapult spokesperson, added: “The car is aiming to go faster than any other land-based machine built thus far. At the speeds hoped for, unexpected cross wind could significantly affect the stability and direction of the vehicle and are therefore a key decision point on when to run the car. We will be measuring and storing accurate data at 1 km points along the track and therefore this info can be used by the team to plan the run.”

A rocky road made smooth thanks to teamwork

The Bloodhound LSR team is incredibly grateful to the Northern Cape Provincial Government and members of the local Mier community, who undertook the painstaking process of removing 16,500 tonnes of rock from 22 million square metres of dry lakebed to ensure the Bloodhound car can run smoothly and safely.

It’s the largest area of land ever cleared by hand for a motorsport event, and testament to the partnership forged between all three groups. This feat was recognised by the FIA in 2016 with the award of special certificates and medals for the 317 workers.