Peter Marsh, Founder of Made Here Now, an initiative to change perceptions of UK manufacturing and attract more talent to the sector takes a look at a fall in the number students choosing engineering courses.

The number of students choosing engineering at university has started to fall, reversing a ten-year rising trend, a finding likely to bolster efforts to increase the effectiveness of engineering promotion schemes.

Since 2015, the intake of students accepted for UK undergraduate university engineering courses has slipped for two years in a row, signifying that engineering has fallen behind other academic subjects in recruitment rates.

Enrolment of female engineering students – a key target in a male-dominated industry – has continued to grow but at a slower rate than previously. 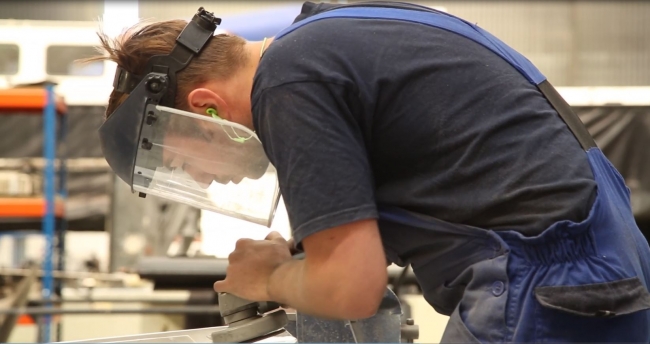 The number of students choosing engineering at university has started to fall / Picture: Griffon Hoverwork

An analysis by Made Here Now, based on data from the university admissions body Ucas, shows that between 2007 and 2017 the number of people accepted by universities for engineering courses rose by almost half, bolstering hopes that the UK was starting to challenge the belief that engineering was a declining profession.

But the 2016 and 2017 intakes both shrank despite the efforts of roughly 600 organisations to encourage more young people to study or work in technology-based disciplines.

The overall trends for engineering have been weaker than those for the broad level of university admissions – even though virtually all subjects have been hit by several negative pressures including a slide in applicants from other European Union nations and the rising costs for taking a place at university. In 2016, acceptances across all subjects monitored by Ucas showed a 0.5 per cent rise, followed in the next year by a 0.2 per cent reduction.

Engineering seems to have been more affected than other disciplines by the EU issue and a reduction in the number of “mature” students who start academic courses in their 20s and later. 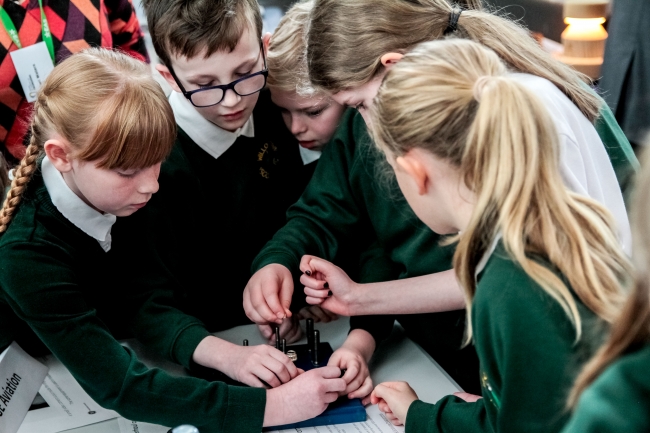 Despite the caveats, Terry Scuoler, chairman of the Institute of Export and International Trade who has recently stepped down as head of the EEF manufacturing organisation, expressed unease at the findings. “I am disappointed to see the drop-off [in numbers]….Government and industry must work together to ensure this does not become a longer-term trend by reinforcing the messaging that a career in engineering leads to highly-paid rewarding jobs in a number of dynamic and growing sectors.”

Engineering has suffered from the same pressures that have led to a marked slowing in demand for university courses of all kinds, notably the increasing cost of studying for a degree and growing interest in vocational training plus the effects of the UK’s planned departure from the EU. But relative to the other subjects the Ucas data reveal a slowdown similar to engineering in other science and technology disciplines – for example physical and biological sciences – which is likely to intensify concerns.

Encouraging more people to study these subjects is seen as crucial in raising the UK’s economic performance by helping business growth and reducing skills shortages.

While Prof Elena Rodriguez-Falcon, provost at the New Model in Technology & Engineering, a new university being set up in Hereford, called the data “very worrying”, others have cautioned against placing too much weight on just two years of data, especially considering the positive trend previously.

Rhys Morgan, education director at the Royal Academy of Engineering, said: “Yes, it is a downward trend and it’s not great but it’s not a catastrophic fall.” Even so, he says the numbers underline the message that industry and education need to step up their efforts to encourage more people to study technical subjects. “The combined [promotional] activity of the [engineering and scientific] community is not having the impact at the scale and pace required to meet the needs of the UK.” 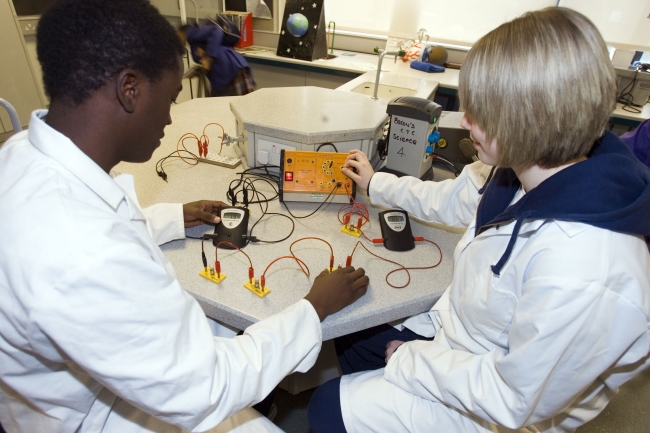 The goal of ‘Made Here Now’ is to project a more attractive image of manufacturing / Picture: RAEng

The Department for Education said: “We want to see even more people, particularly women, studying STEM [science, technology, engineering and maths] subjects …whether it’s through a technical or academic route. It is important for the lifeblood of our economy and will give people the skills they need to get good jobs.” The DfE is among the government departments that have declared 2018 “the year of engineering”, during which they plan to increase the promotional drive among young people.

The “engineering promotion” industry spends tens of millions of pounds a year and has been stimulated by concerns about potentially serious skills shortages. The same concerns prompted the setting up of Made Here Now to project a more attractive image of manufacturing.

According to the lobby group EngineeringUK, the supply of engineering graduates in the UK falls short of demand by about 22,000 a year. Virtually everyone in technology-based industries highlights the need to recruit more women: in 2007 just 12 per cent of those admitted to engineering courses were women and while the proportion reached 17 per cent in 2017, this is still regarded as far too low by most in the engineering community.

In sharp contrast to the situation in engineering, women far outnumber men on courses of all kinds. In 2007 women accounted for 54 per cent of acceptances, with the figure rising to almost 57 per cent in 2017.

Detailed data for engineering show overall acceptances were impacted by an annual fall in both 2016 and 2017 of more than 2.4 per cent in the numbers of students taking engineering aged 19 and above, while engineering was hit in 2017 by a 4.8 per cent drop in students from the rest of the EU, more than twice the rate of fall for all Ucas subjects.

Winners and losers in a changing university landscape 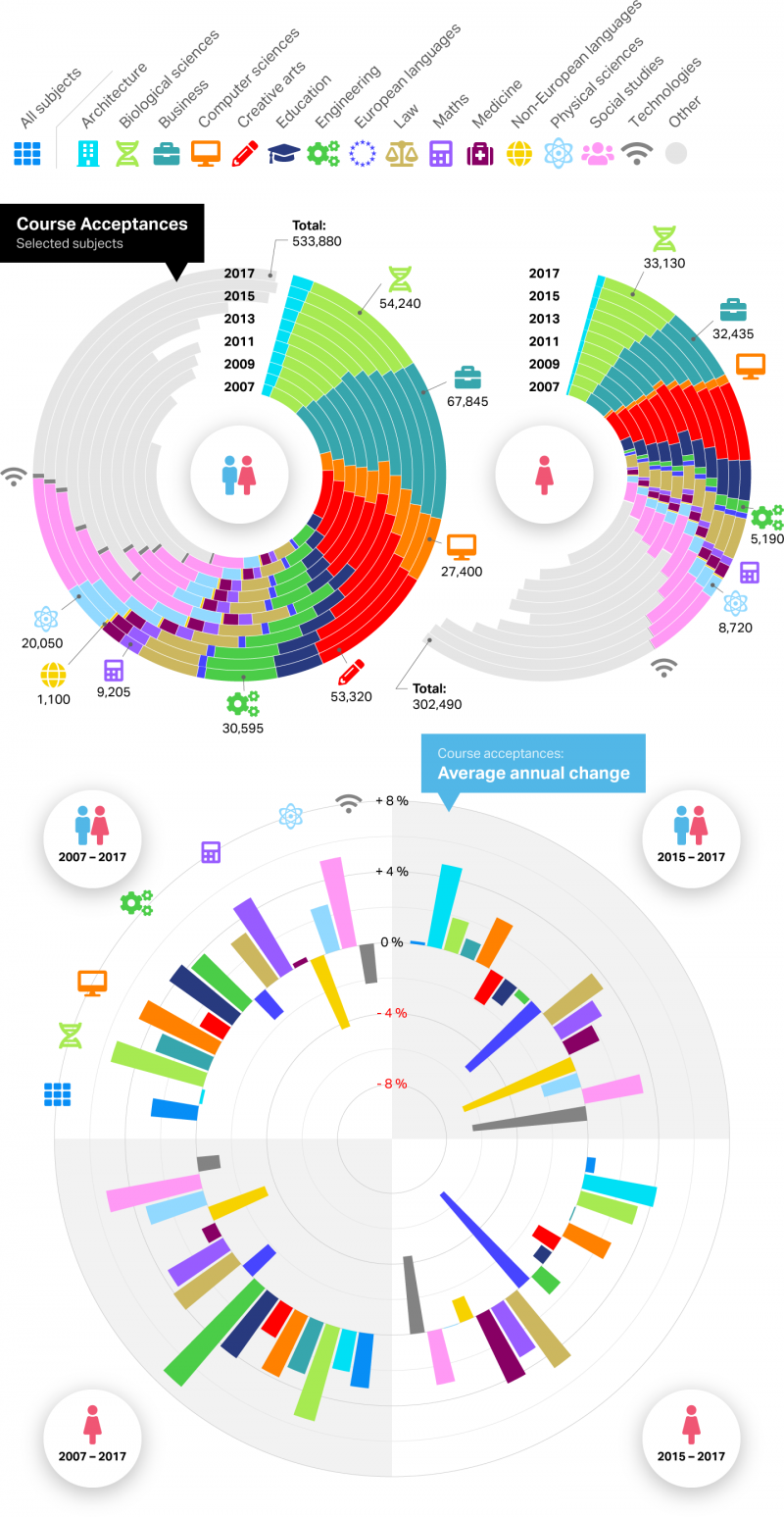