I understand
Home••Feature: How breweries are adapting...

Feature: How breweries are adapting to replace CO2 with nitrogen

Many breweries are changing their processes to move away from carbon dioxide in favour of nitrogen. Andrew Butler from Atlas Copco, looks at how and why they are adapting.

Many breweries – from the largest scale industrial breweries to microbreweries and craft beer producers – use carbon dioxide (CO2) at various stages of the brewing process. Applications include inerting, purging tanks or brew kettles, protecting against oxygenation, and nitrogenating the beer.

However, due to periodic shortages of carbon dioxide gas (a by-product of the fertiliser industry) brought about whenever fertiliser plants cease production due to high gas prices, breweries have seen enormous increases in the costs of their CO2 supply. This year typical costs have increased five-fold from £200 per tonne to £1000 per tonne, although one large brewery which we have been in touch with has seen a £3000 surcharge per tonne added to their usual CO2 purchase price. The implication is that the brewery’s CO2 bill would rise from £3000 per month to £35,000 per month – an unsustainable amount – unless the brewery finds ways to adapt its processes away from carbon dioxide wherever possible. On top of the rising price of carbon dioxide, the same breweries are also experiencing higher than usual electricity costs. These two issues combined naturally have a knock-on impact on the consumer price of beer and, in the worst-case scenario, even risk putting some breweries out of business. 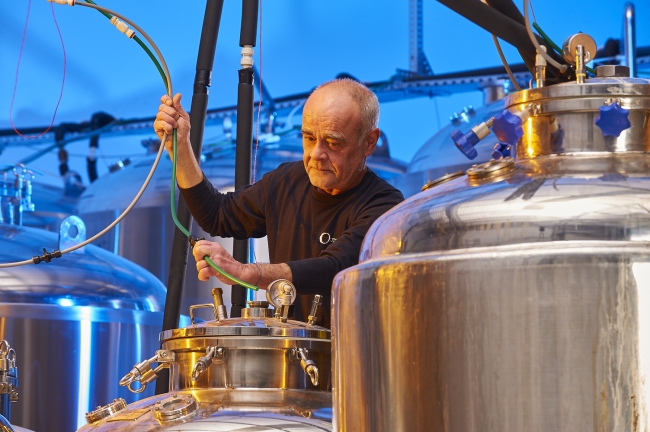 Many breweries – from the largest scale industrial breweries to microbreweries – are adapting to replace CO2 with nitrogen / Picture: Atlas Copco

This is where nitrogen gas comes into the picture. Nitrogen, which is much cheaper and more readily available, can be used instead of carbon dioxide in at least two-thirds of brewing applications. It is already known and trusted by many manufacturers in the food and beverage industry as a viable CO2 alternative for removing oxygen from all types of packed goods, as well as for cleaning, inerting and pressurising bottles and cans before filling. Nitrogen is also more sustainable. Replacing a proportion of CO2 with nitrogen significantly reduces a brewery’s carbon footprint. When the nitrogen used in a brewing process is released, it merely returns into the air that it came from, whereas escaped CO2 is a greenhouse gas emission.

Nitrogen can be supplied in various ways: in high-pressure cylinders delivered to site by a third-party supplier, as liquified nitrogen in tanks, or it can be generated from compressed air using an on-site nitrogen gas generator. The latter method has many advantages over the first two.

An on-site nitrogen generator is a self-sufficient resource that can instantly deliver all the gas breweries need, on-demand, 24/7, at the touch of a button. It produces nitrogen at as low as one-tenth of the cost of delivered nitrogen, with a short payback period now that energy and CO2 prices are high, making this method more attractive to breweries than it has ever been before. Self-generation solves several other issues as well. Gone is the need to order deliveries to site and arrange for collection of empty cylinders or request tank refills, thereby reducing logistics planning and associated administration time and costs. Fewer delivery trucks arriving on site reduces carbon footprint. Having nitrogen on tap also avoids any production time being lost while gas cylinders are changed. Furthermore, removing high-pressure bottles or tanks of liquid nitrogen from site removes certain safety concerns and eliminates the need to store them in a space where there is adequate ventilation in case of a leak.

Suppliers such as Atlas Copco have developed a range of nitrogen generation solutions that make it easy for breweries of all sizes to reduce their dependence on carbon dioxide and improve their profitability. For example, the NGM+ is a compact, quiet and dependable nitrogen generator that maximises the robustness and simplicity of membrane technology. Thanks to its exceptionally low air and energy consumption, it also offers the lowest cost of ownership on the market today. The NGP+ is a premium nitrogen generator which uses pressure swing adsorption technology. Carbon molecular sieves guarantee premium nitrogen at the highest purity levels and highest energy efficiency. For smaller breweries, the NGMs membrane nitrogen generator is a cost-effective, point-of-use solution that meets low-flow requirements and has a footprint of as little as 0.25 cubic metres.

At Atlas Copco, we understand that brewers face an everyday struggle to produce quality beer for the right price, with the challenge sharply increased by the recent scarcity of carbon dioxide and high energy prices. We do not want to see breweries forced out of business, soaring beer prices or pub closures. Breweries should be insulated from the impact of CO2 supply shortages and high prices, and, in our experience, on-site nitrogen generation is the most dependable choice to do so. We expect that we will see more breweries adapting as much of their production equipment as feasible to use nitrogen gas rather than carbon dioxide in the future, and when they do, we will be ready to offer our advice on selecting the most suitable nitrogen generators for their individual needs.