I understand
Home•Feature: How robots & automation...

Feature: How robots & automation are changing the construction industry

FUTURECAST is an innovation, education, and R&D centre focussed on modernising the construction and quarrying industries. Based in the W8 Centre in Manorhamilton, County Leitrim, Ireland, it is a not-for-profit organisation, operating with support from the Irish Government and private industry.

It works with companies involved in the construction and quarrying sectors and their supply chains, to encourage the adoption of advanced technologies and processes including automation, robotics, modular construction and factory building, additive manufacturing and “Industry 4.0” technologies, to improve processes and that includes logistics operations. It offers training from entry level to the reskilling of experienced staff, with the accumulated expertise and knowledge of its personnel as its foundation. FUTURECAST also has a particular focus on promoting women to work in construction and quarrying, under the banner of a programme called WICQI.

Labour and skills shortages have forced the recognition of the need to change working practices, to take advantage of new technology and to attract recruits from a labour broader pool while, at the same time, making every effort to retain expertise and knowledge within these building industries. 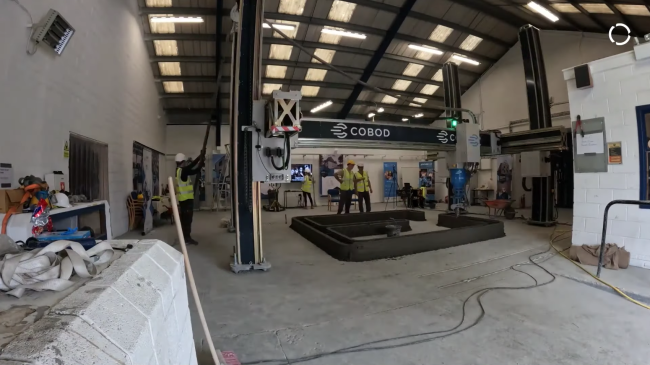 KUKA, FUTURECAST and WICQI will be hosting a webinar on 8th February to discuss the future of automation in the construction industry / Picture: KUKA

“Our big problem is that we are not getting young people interested in the construction industry. We used to have a huge supply of youngsters coming into trades and that isn’t happening anymore,” says JJ O’Hara, CEO of FUTURECAST and a veteran of construction and quarrying. “We see a lot of tradespeople leaving at around the age of 40, too.”

The FUTURECAST approach is to rethink construction and quarrying to make better use of the skills younger people have and the things that interest them, and to overcome the industry’s image as an occupation that is dirty and dangerous. The centre addresses the issues of concern to younger people, such as sustainability, and embraces solutions such as the adoption of green energy and modern, technology-based methods of construction. These range from exoskeletons and motorised gloves to aid manual activities to advanced technologies like Augmented Reality and Virtual Reality (AR and VR), via robotics, additive manufacturing, automation and machine learning.

And it’s not only young people who can gain from the technological take-up.

“We are seeking to retain the bricklayers and plasterers who have tended to leave the industry into jobs in digital industries and to redirect them to working in the factory,” O’Hara explains. “We could enable them to work differently, retaining their knowledge and expertise, and retrain them into teachers and mentors, training people in using a 3D printer or robotic systems, such as the KUKA robots we have in our factory. Technology skills are transferable, much more so than traditional manual trades. People with skills in robotics and automation will be less vulnerable to future downturns in construction.”

3D printed panels have many advantages

The increased automation of processes means that construction is already approaching the point where 50% of a typical house can be factory-made, with roboticised and automated processes. Modular construction and factory prefabrication reduces waste, improves performance and is faster in practice than traditional, labour-intensive construction processes. Additive manufacturing, also known as 3D printing, of concrete panels can be a much faster and economical way of building than manually building walls.

“Concrete 3D printers are much faster,” says O’Hara. “It typically takes only around 14 hours to print a 200 square metre house, which helps to reduce lag times and makes maintaining a supply chain easier, as jobs do not have to be staggered in the same way. Printing is more precise; they print exactly where they are told and don’t generate unnecessary extra material. They can run using local materials, thus cutting transport times and consequently the carbon footprint. They are faster, less wasteful, safer and much more labour-efficient.” 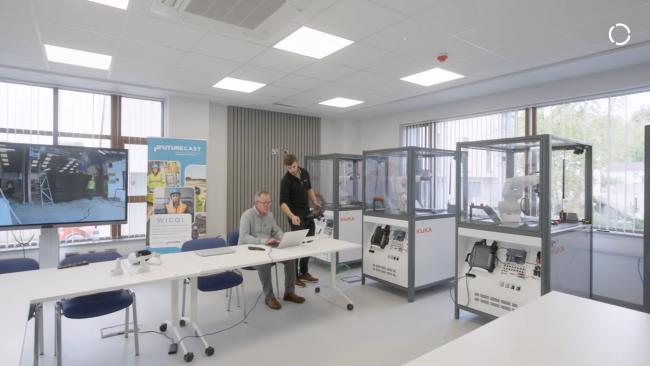 A 3D printed concrete panel is also typically stronger than a breezeblock structure. It can withstand 40 Newtons force, compared with a breezeblock’s tensile strength of just seven Newtons. They are also less likely to experience wear and tear and are more resistant to freeze-thaw, which can cause heavy damage in exposed areas.

The modular system means that buildings can be manufactured in the same or similar way to how cars are produced; on an assembly line with a few dozen robots performing tasks to bring the whole building together. A modular, factory-built house or office block doesn’t have to be built locally; components are made in the factory and then exported anywhere in the world.

Led by an expert team

There is no doubt that FUTURECAST is focused on reshaping how companies engage in construction and quarrying. It has invested heavily in order to do so. The centre was established only recently but the senior team at the W8 Centre has strength in depth. Mark McGowan, the 3D Concrete Printer Instructor, has over 23 years’ experience as a cabinet maker and has extensive knowledge of CNC milling/manufacturing processes. Patrick O’Donnell leads the R&D department researching modern methods of construction. Laboratory Manager Dr Julia Powers has a background in biochemistry and inorganic chemistry. Paul Quinn, Skillnet Network Manager, has over 35 years’ experience in automation and robotics. The FUTURECAST facility was opened during the Covid pandemic, in 2021, and it has already made its mark, demonstrating how 3D printing, AR and VR, Artificial Intelligence and Machine Learning can deliver advantage in practice.

“One of the projects that we are working on at the moment is a robotic bagging plant for the quarrying industry,” O’Hara says. “It qualifies different types of stone and bags them appropriately. Its AR and VR systems enable remote engineering and it is equipped to be digitally twinned.”

Building Information Modelling, or BIM, ensures that lessons learned and information deployed before, during and after the construction are retained and accessible. Better data management leads to better construction at all stages, from design through materials selection and construction, to final delivery.

KUKA robots are a key part of FUTURECAST’s operations.

“We bought four training centres from KUKA, each comprising a robot equipped with VR and vision systems,” says O’Hara. “We undertook a lot of research globally and concluded KUKA offered the best education packs.” He and his colleagues had seen KUKA robots in action at the Irish Manufacturing Research Centre, which has supplied some of FUTURECAST’s board members. “This research centre is working more on manufacturing whereas we are very specifically involved in construction, but we have worked pretty closely with them.”

The construction industry is changing fast and is making up for lost time. FUTURECAST is leading its transformation in Ireland and helping it to change from a traditional, labour-intensive industry to a world-class, technology-led, modern, high added-value industry.

Robots and automation in construction webinar