I understand
Home••Feature: Robots are changing the...

Feature: Robots are changing the culture in pharmaceutical manufacturing

For robots to become an integral part of pharmaceutical manufacturing processes they needed to be able to operate within the stringent cleanliness and hygiene environments associated with pharmaceutical production. Early robots, whilst perfectly suited to less restricted environments in other manufacturing arenas, did not meet the regulatory requirements associated with the primary production areas within pharma. 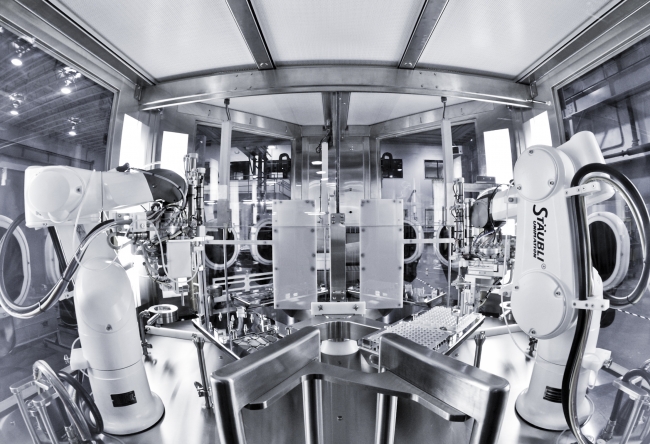 Robots, if used at all, would therefore be deployed in performing secondary or final packaging and palletizing operations. In more recent times, the development of robots such as Stäubli’s 6 axis STERICLEAN variants opened up a wide range of possible applications for robots. These robot systems comply with ISO Class 5 cleanroom standards, and crucially, can work permanently in a VHP (vaporized hydrogen peroxide) environment.

In addition, the flexibility and dexterity of robots, together with their ability to perform multiple tasks, has been instrumental in the development of new manufacturing methods, especially for small to medium batch production.

Operations which were traditionally performed manually are now being fully automated, often with one or more robots operating within a closed and controlled environment.  Robots address the increasingly stringent regulatory challenges by restricting the opportunities for human interaction, in turn significantly reducing the risk of contamination.

Not too long ago, the idea of using robots on liquid filling lines for vials was considered non-viable. However, Stäubli’s STERICLEAN range of robots has opened new opportunities for the design of these systems. This range of robots can perform the various filling, capping, sealing, weighing, and sterilising operations associated with the growing number of pharmaceutical products packaged within RTU (ready to use) containers. 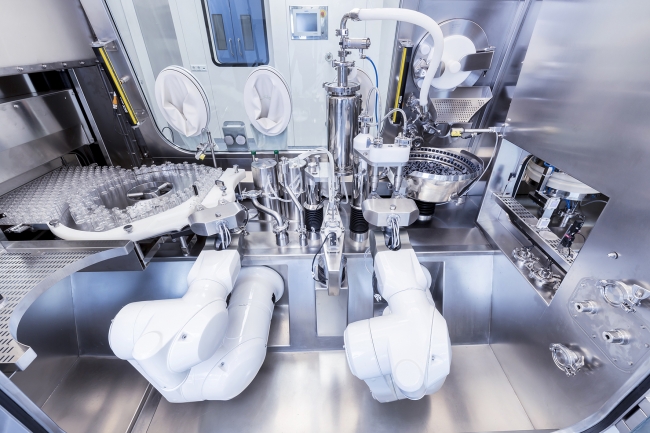 For robots to become an integral part of pharmaceutical manufacturing processes they needed to be able to operate within the stringent cleanliness and hygiene environments associated with pharmaceutical production / Picture: Stäubli

In one such example, no fewer than three identical Stäubli TX60 STERICLEAN robots are integrated into a stand-alone system where they perform all the essential handling operations. The first robot picks vials from a feed table and transfers them to the filling station. The second robotic arm then takes the filled vials and moves them to a capping station, from where they are transferred by a third robot to the final sealing station. The flexibility in the way these robots operate allows for them to be wall-mounted, beneath the actual working level, so as not to adversely affect the unidirectional airflow within the cell.

Using robots in this way enhance the capabilities of the production cell as they can deal with multiple variants through programme changes as opposed to having product specific tooling elements. This also has a positive influence in both the reduced changeover time between batches, and also any cleaning and disinfection routines, as there are fewer part to deal with.

Biotechnology opens up completely new possibilities for the production of medicines and vaccines. Under certain favourable conditions, the active ingredient reproduces itself. The prerequisites however include stable environmental conditions and processes, both of which can best be achieved with a high degree of automation.

A manufacturer of a Hepatitis A vaccine has set up a production facility with an output of between three and four million vaccine doses per year. Once again Stäubli STERICLEAN robots are a key part of the process, in this case, the manipulation of the “cell factories”. The term “factory” in this instance refers to a rack containing 160 trays. Each tray initially contains a nutrient solution into which the mother cells are introduced. The cell culture is then left to grow; however, the nutrient solution must be occasionally changed. In a further step, the virus-infected cells and another growth-promoting medium are added. At the end of this process, it is a simple matter of harvesting the attenuated virus containing the highly effective vaccine, which has virtually reproduced itself.

The Stäubli TX200 STERICLEAN robots come into play when the cells have already been “inoculated” and the active ingredient is ready to grow. The robot, which uses an image processing system, picks up the “cell factory” and sets it down at the point of use, carefully shaking the rack to distribute the liquid evenly. It then deposits the rack at the designated storage location. During the culturing process, which continues for at least ten days, the robot repeatedly picks up the individual racks and carries out its set program of shaking and tilting movements. 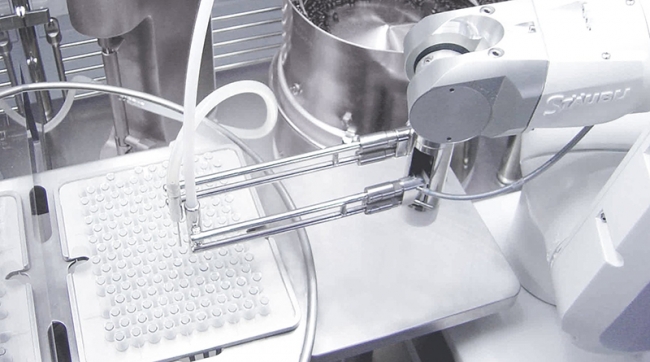 Robots have risen to the multiple challenges presented by the pharmaceutical sector and have become an essential part of multiple manufacturing processes / Picture: Stäubli

Bausch Switzerland S.A. has, as part of its comprehensive range of Pharmaceutical technologies, an outstanding solution for filling and closing syringes. This innovative system includes a Stäubli TX60 CR robot, and the system is capable of achieving a maximum output of up to 4000 syringes per hour.

Cycle times which are less than a second can only be achieved with innovative system and processing technology and with very fast and highly accurate robots. The Stäubli TX60 CR was designed for precisely these situations. The highly rigid, encapsulated mechanical structure and the compact direct-drive JCM geared motors, developed in-house by Stäubli, permit extremely fast acceleration in every axis.

The system is designed for high output with maximum process reliability. The TX60 CR automatically fills and closes syringes quickly, accurately, and reliably, even under cleanroom conditions. The robot uses a pioneering gripper system, designed with the benefit of long-term experience, and one essential feature is that it is used to simultaneously fill and close the syringes, drastically reducing the system’s overall cycle time.

The examples highlighted in this article clearly demonstrate that robots have risen to the multiple challenges presented by the pharmaceutical sector and have today become an essential and integral part of multiple pharmaceutical manufacturing processes. Stäubli robots are now recognised as the state-of-the-art technology in the pharmaceutical and medical industries due to their cleanroom suitability, precision, speed, and reliability.