When the UK went into lockdown, Ramfoam’s management team felt the effects on their business almost overnight.

As a Midlands-based, market-leading SME specialising in the conversion of foam products for the past 25 years, they work closely with many of the sectors that have been amongst the hardest hit by the pandemic, including aviation, automotive, hospitality and retail.

In such an unprecedented situation, Ramfoam – like many other manufacturers and processers across the UK, and indeed globally – was faced with the titanic challenge of quickly adapting.

The senior team knew immediately that they wanted to support the NHS, particularly amidst a growing and pressing shortage of PPE products – so they quickly joined the ranks of the 16,000 other businesses who applied to support the government’s request. 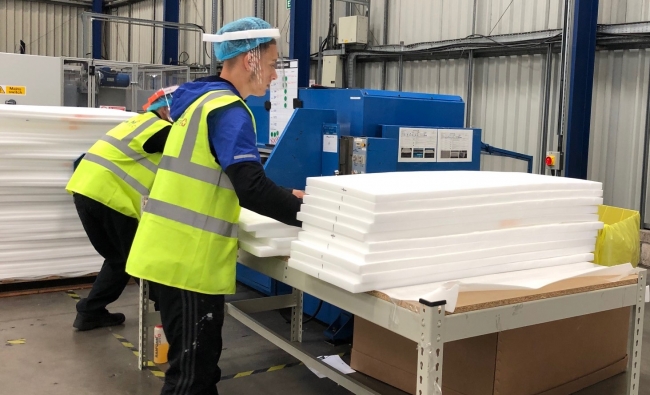 Ramfoam was faced with the challenge of quickly adapting when the UK went into lockdown / Picture: Ramfoam

Ramfoam already has significant experience in converting medical-grade foam products for the healthcare market in numerous applications, so at the beginning of April 2020, led by their International Director, Tim Mulqueen, their research began.

“We had previously been approached by a number of companies to supply foam strips for face visors,” said Tim. “And with input from our existing NHS contact base, we were able to create the RamfoamCare+ Face Visor in record time.

“With this product, we sought to develop something that could offer the maximum amount of protection in the most comfortable, sustainable and cost-effective way, and that didn’t cause painful sores or open wounds around the ears after long periods of use.”

The design brief for their team consisted of four basic elements; to create a visor that was manufactured from world-class modern British materials, with the least number of components possible (just two), to allow easy self-assembly in seconds using replaceable and recyclable components, and finally to create high-volume production capabilities.

After a very intensive period of design and testing, the team was able to develop the RamfoamCare+ Protective Visor in a matter of weeks. 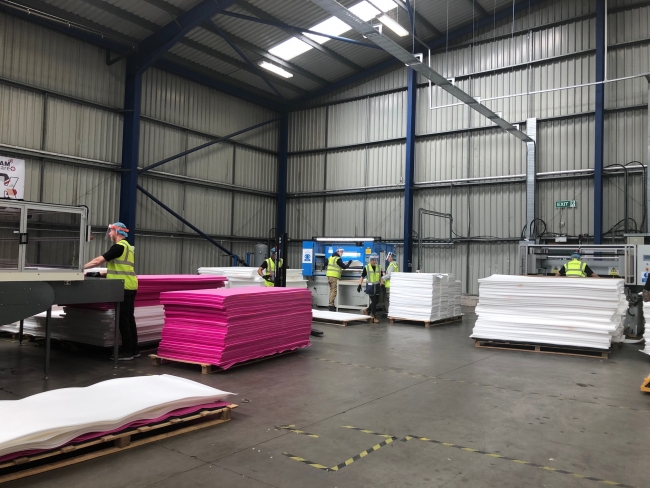 Ramfoam was able to mobilise so quickly as its multi-skilled workforce had already taken part in a reskilling process before COVID hit / Picture: Ramfoam

The product – which can be assembled by users in seconds – features a latex-free, hypoallergenic foam headpiece, attached to a replaceable, optically clear, anti-fog visor. All the components are made in the UK, using British materials, and are fully recyclable.

The medically approved skin contact foam is made from Zotefoam’s market-leading foam product, Plastazote®, and Ramfoam incorporated winglets on the back of the visor’s headpieces which face masks can be looped to. The self-adjusting seal fit is designed to suit the user’s head shape and size for maximum comfort over extended periods of use.

The visor itself extends from the forehead to below the chin and wraps around the sides of the face to provide protection to the complete facial area. The most vulnerable areas, such as the eyes, nose and mouth, are therefore protected from splashing or spraying.

The headband’s closed-cell structure does not allow the ingress of liquids or aerosols, which prevents bacteria from being harboured – and because all liquids are restricted to the surface, disinfecting and sterilising it is simple, meaning it can be reused time and time again. 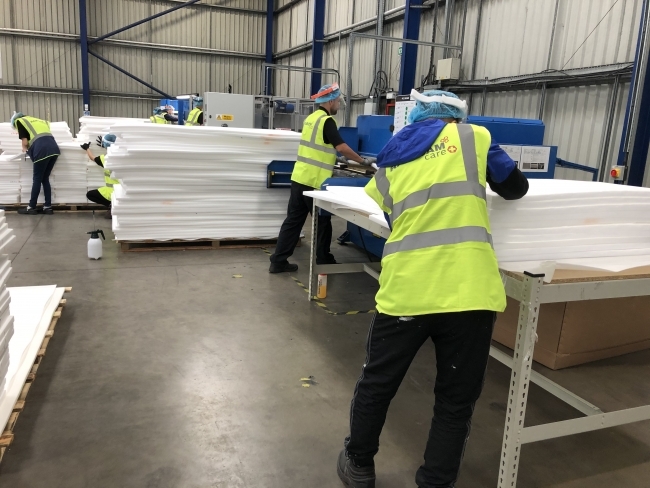 With a fully developed product, Tim sought an immediate patent for part of the design, and RamfoamCare+ Protective Visors were BSEN166 and CE approved by SATRA Technology.

In May 2020, Ramfoam was successful in being awarded a contract from the Department of Health and Social Care (DHSC) to produce three million RamfoamCare+ Face Visors per week.

“Never has Ramfoam faced a challenge on this scale,” said Tim. “Developing a new product for market normally takes a great deal of time, but we were able to design and develop the product, source suppliers, patent the design and get it certified within just five weeks. To paraphrase Charles Darwin, “It is not the strongest of the species that survives, nor the most intelligent. It is the one that is most adaptable to change.”

This was quickly supplemented by the creation of more than 500 jobs throughout the Midlands and London, both at Ramfoam’s PPE manufacturing facility and throughout their wider supply chain. 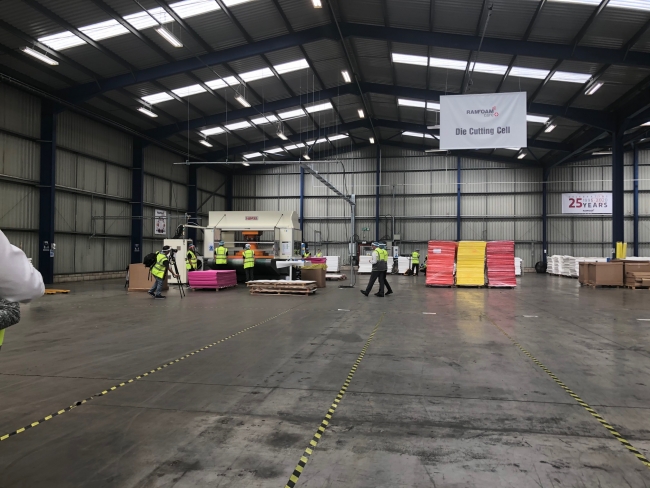 500 jobs have been created throughout the Midlands and London, both at Ramfoam’s PPE manufacturing facility and throughout their wider supply chain / Picture: Ramfoam

Ramfoam had previously invested heavily in the automation of some of their equipment, including press machinery and wrapping, which meant they were able to ramp up production quickly. Additionally, they invested in new processes and a dedicated facility in excess of 100,000 sq. ft, alongside their existing manufacturing sites, in order to reach the three million RamfoamCare+ Face Visors required by the DHSC each week.

Finally, the support of Warwick Manufacturing Group, part of the High Value Manufacturing Catapult, along with the team from the Department for Business, Energy and Industrial Strategy added significant value by helping Ramfoam with factory modelling, mapping and automation.

Tim concluded, “Every member of staff at Ramfoam is incredibly proud to play a role in helping to protect the NHS, each visor they make is a chance to stop the spread, lower the transmission risk and ultimately even save someone’s life – and there is absolutely nothing more motivating for us as a business.”

Now that production is fully underway, Ramfoam is looking to widen its offering alongside the DHSC contract by making the visors commercially available across the UK.