How simulation plays a key role in Formula E racing

Competitive racing pushes the limits of driver skill and modern feats of engineering, all while adhering to tight regulations to keep a spirit of fair competition. In 2014, Beijing hosted the inaugural championship race for the newly-conceived, all-electric class of Formula E. Since the beginning, these vehicles have been tightly standardized, only allowing individual teams to customize certain aspects of their car. To this day, the battery must remain the same in every vehicle, so new ways to push performance are needed.

Recognizing these limitations, a leading Formula E team approached Maplesoft to develop dynamic models of their car, hoping to find new ways to tweak their systems for optimal performance. By modeling the dynamics of the car, they would be better able to develop customized racing strategies for different tracks, weather conditions, and pit stops, ensuring they were using their battery power for peak performance in each case. These strategies included design tweaks to the vehicle itself, and also real-time simulations that could update the team with information as variables change during the race – features not commonly available without a system-level modeling tool. 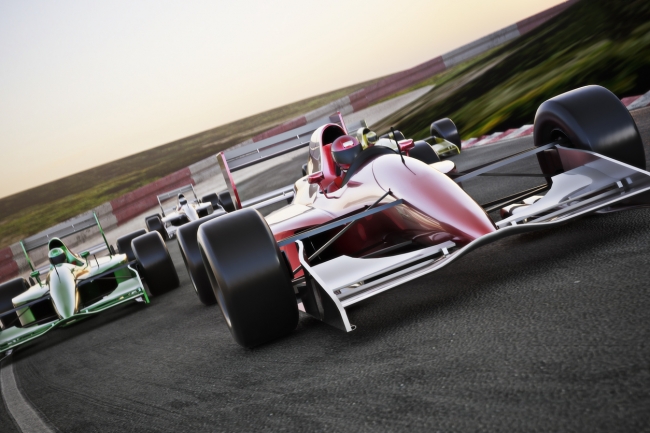 In order for the Formula E team to be successful, Maplesoft began work on a dynamic car model that would be validated against real-world performance data. The model needed to take several important systems into account. Using the system-level modeling tool MapleSim, engineers could capture the dynamics of each system in one multidomain environment.

The Formula E car model required incorporating the following subsystems to be successful:

• Chassis: The vehicle chassis forms the basis of the multibody model, defining mass, moments of inertia, and rigid bodies that connect other subsystems.
• Steering: The steering subsystem is where the driver input is simulated. In this model, the Formula E FanBoost technology can also be incorporated, which provides temporary power increases from the battery based on the spectator’s voting and input.
• Tires: The 18-inch tires used in Formula E are first created in MapleSim, and they are validated using real-world test data to ensure a fit.
• Battery: A lithium-ion battery can be modeled in MapleSim with high precision, and the Formula E team could use the battery model to understand the actual performance of their batteries under a wide range of scenarios.
• Inverter: With only a handful of test data, the inverter can be created in MapleSim to model the transformation of DC to AC power.
• Motor: A critical component to determine vehicle power, the motor can be modeled in MapleSim and fit to test data to incorporate into the overall model. Using this motor, detailed analysis can help determine efficiency maps, and the speeds possible at different motor currents.
• Gearbox: Using MapleSim’s extensive collection of gear components, the gearbox is modeled using built-in components and performance data to customize their particular parameters.

A key step in the process of creating the functional model is to correlate the model’s parameters with test data provided by the Formula E team. This step is crucial in order to ensure that the model will provide accurate data across the range of operating conditions. For example, the suspension system requires test data to tune the parameters of the springs, damping, mass, and inertia parameters. Using MapleSim, engineers can easily create these systems with stock components and default parameters, and then see the range of parameters that are available to fit to their particular system. 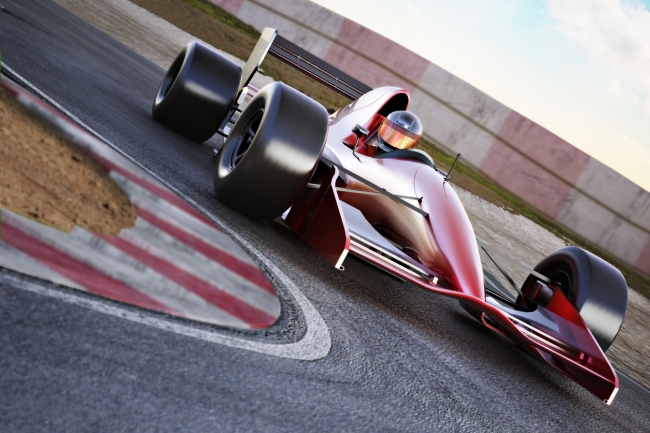 Simulation modeling was used on the suspension system, which can be customized to fit a specific project by using real-world test data / Picture: Getty/iStock

With all of these components together in one system, the Formula E team can better understand trade-offs when trying to design a better car and a faster racing strategy. For example, if pressure began to decrease in certain tires, the model would be able to simulate the ideal performance in that scenario and provide new insight for the team, such as modifying how the driver might accelerate on certain turns. Or, the team might want to know the ideal timing for using their FanBoost accelerations in various kinds of weather. These examples are just a few of the kinds of questions that the Formula E team are able to answer with a system-level model at their disposal.

With only a few years of racing under their belt, the Formula E class has been making huge strides in all-electric racing. Using only a battery to power their high-performance cars, it’s more important than ever for teams to fully understand their car’s behavior for race day. By using MapleSim, the Formula E team can bring a new level of optimization to their engineers, discovering the complicated interactions between all the parts of their car. And, as with other leading-edge industries, these are developments we can hope to see in the near future for our own cars, moving us even closer to efficient, powerful electric vehicles for all.