I understand
Home•igus paves the way with...

A new plastic bottle deposit return scheme – to tackle more of the 13 billion plastic bottles we produce every year – was finally given the government’s green light on Friday 20th January 2023. But igus has already paved the way with its popular “chainge” scheme for end-of-life e-chains and its brand new cable recycling programme.

Consumers in the UK go through an estimated 13 billion plastic drinks bottles a year. Only 7.5 billion are recycled, while the remaining 5.5bn are landfilled, littered or incinerated. On 20 January, the government announced plans to deploy a fully operational Deposit Return Scheme (DRS) for plastic bottles and drinks cans in England, Wales and Northern Ireland by 2025.  Promised by then Environment Secretary Michael Gove over five years ago, campaigners have been pushing for the policy to incentivise consumers to recycle plastic bottles. 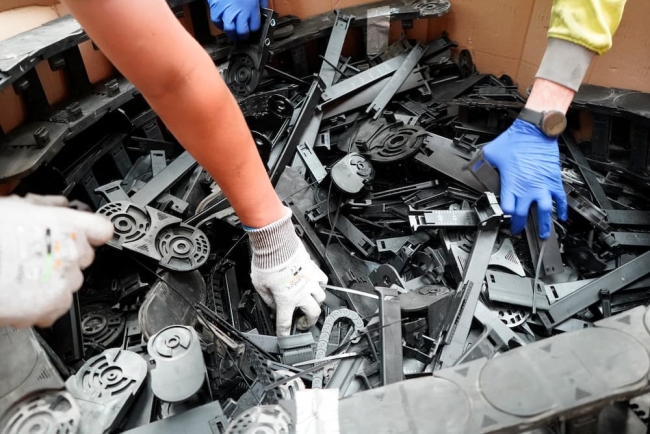 The system will work similarly to a reverse vending machine, where bottles are returned for money or credits. A DRS scheme in Scotland is planning to go online in August. Consumers will pay a 20p deposit when they buy a drink that comes in a single-use container made of PET plastic, steel and aluminium. They will get their money back when they return the empty container to one of tens of thousands of return points.

The new DRS has been broadly welcomed by soft drinks manufacturers who will now work to modify their labelling to promote the new scheme, and show they support it. Matthew Aldridge managing director of igus in Northampton, recalls as a young boy returning glass bottles to the newsagent to exchange for 10 pence, and then spending this princely sum on cheap sweets loaded with artificial ingredients! Now we see history repeat itself with a reward-based DRS designed to reduce plastic pollution.

They say imitation is the sincerest form of flattery, and the team at igus wonder if Prime Minister Rishi Sunak and his cabinet has taken some inspiration from our own green initiatives.

As a manufacturer of engineering components made from high-tech plastics, igus takes its environmental responsibilities very seriously. For several years, igus has been running its own DRS for plastic e-chains that have reached their end-of-life.  Previously many of these heavy duty and robust engineered plastic chains were thrown out and ended up in landfill because there was no specialist recovery service for them. The igus chain DRS scheme is manufacturer-agnostic, and open to all plastic cable chain models.

The recovered plastic is cleaned, regranulated, and reused for manufacturing new products, a true circular mini-economy.  A credit note is given in exchange for the plastic chain, an amount determined by the weight, which in late January is £0.62 per kilogram.  As igus prefers names rather than acronyms, this is known as the “chainge” program.

But the chainge programme is not all! Inspired by the scheme, product manager for igus cables in the UK, Daisy Durrant, wondered how she could develop a similar program for end-of-life cables.  The result of her research is the cable recycling program – another variant of DRS!  Once again, used electrical and electronic cables are returned to igus in Northampton, where the plastic out jacket is separated from the metal conductors. The plastic is then granulated, just like in the chainge program. The metal content is then sold, but unlike the chainge program, no credit note is issued. Instead the proceeds are used, in partnership with charity The Woodland Trust, to fund tree planting across the country.

If the scheme is a success and makes a profit from recycled plastic bottles from 2025, perhaps the UK government could take a similar positive and pro-environment action? Working together, industry and consumers can reduce carbon emissions and make a real difference to our world.