Ever since robots started to become a significant part of our manufacturing processes, the benefits of the technology, in terms of performing heavy, dirty, repetitive, and sometimes dangerous tasks have been extolled. Clearly for businesses, the automation dividend is seen in improved performance, productivity, quality, and often lower manufacturing costs. However, alleviating humans from these activities is just but one part of the story. Today, with labour shortages blighting many businesses, employee retention has never been more important.

Simon Jenkins from Stäubli looks at the need to ensure that there is also an automation dividend for employees if businesses are to maximise the benefits of their investment in robotics and automation, through the retention and upskilling of their workforce.

The perception of a clear dividing line between tasks for robots and tasks for humans started to become blurred when collaborative robots entered the workplace. Clearly, risk assessments need to be carried out to ensure safe and true collaboration, but the continued uptake of these systems confirms that they do have a place in our manufacturing environments.

This collaboration between the operator and the robot is a benefit to both parties, with the operator generally being removed from the mundane tasks to add value through human flexibility and dexterity. This represents one level of improving an operators’ working environment and giving them a more interesting role. 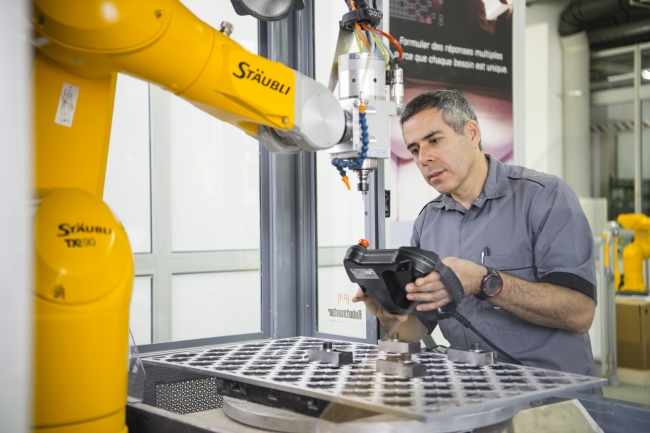 Investing in training can deliver more interesting roles for employees, upskilling them from operators to roles more akin to that of a technician / Picture: Stäubli

The continued shortage of labour in many of our manufacturing sectors has sparked a new and higher level of interest in robots and automation, and perhaps for the first time, businesses are looking even more closely at how they can re-deploy, re-train and upskill their existing workforce alongside their investment in automation to futureproof their production.

Simon Jenkins explains: “The often-voiced mantra of ‘robots cost jobs’ has over the years proven to be largely false. It has now become crystal-clear that in many cases robots and automation are the route to not only saving jobs, but the means of providing employees who were once restricted to mundane tasks the opportunity to obtain new skills and develop as individuals.”

So how can one individual’s role change as a result of the introduction of robotics and automation? Simon Jenkins continues: “It is true that many of the tasks once deemed to be the domain of the operator, are now being performed by a robot. However, despite the common perception of 24/7 unmanned running, robots and automation do at times require support. This is especially true in applications where multiple product variants are being produced. Although it is sometimes possible to automate many changeover tasks, in some cases there is still the need for human intervention to perform set up tasks such as swapping over grippers, fixtures and organising product for assembly or processing. The role of the operator here is now more akin to that of a technician.

The once mundane tasks are now replaced with interesting operations which require increased skills and deliver a greater level of responsibility. Taken a step further, with the company investing in additional training, this one employee could also take responsibility for robot programming and performing initial diagnostics on the robot cell should problems arise.”

There are also other opportunities for business to entice existing employees to think about upskilling through additional training in some maintenance tasks. For those individuals who show yet more potential, further training, and education to obtain formal qualifications will be greatly appreciated by the individual and the business will have grown their skill base in-house

as opposed to spending often large sums on ongoing recruitment to replace disillusioned employees. Investing in the existing workforce will not only increase the overall skill levels within the business, but also foster greater loyalty from employees who will have been able to realise a tangible dividend for themselves from the company’s investment in robotics and automation.