We are all very familiar with the concept of industrial robots in their many guises and the benefits they bring to our manufacturing processes. Over the years, we have seen the technology improve in many ways with increased payloads, greater speeds, better accuracy and repeatability, more intuitive and user-friendly programming methods and the ability to interface with other technologies such as vision systems. The relatively recent introduction of collaborative robots, or cobots as they are more commonly known, has further expanded the range of applications for robots through their ability to operate alongside humans.

We are now experiencing the next stage in the evolution of robotics, that of mobility and autonomous operation, which is set to revolutionise not only manufacturing operations but also those associated with intralogistics. Combining conventional industrial robot and cobot technology with the latest developments in modular individual transport (MIT) systems and automated guided vehicle (AGV) systems opens up a whole new range of opportunities for manufacturing companies to both automate and connect component handling, transportation and processing operations throughout their plant.

AGV’s have been with us for some time, and although in the early days the functionality and capability of these systems were somewhat limited, just as industrial robots have evolved, so too has AGV technology. Today, forward thinking industrial robot manufacturers such as Stäubli see these technologies as a key part of their portfolio, complementing their range of industrial robots and allowing them to offer a truly holistic approach to automated manufacturing.

Stäubli has been working with WFT, specialists in the development of customer and application specific AGVs (Automated Guided Vehicles) which use a unique and patented drive technology since 2015. The outcome of this collaboration was HelMo, the first mobile robot platform comprising of an AGV and a 6-axis robot. Following this successful partnership, Stäubli acquired 70% of the business, which is now known as Stäubli WFT GmbH.

The patented drive system developed by WFT provides omnidirectional manoeuvrability and is capable of operating either indoors or outdoors. Intelligent software, premium quality, robust construction and payload capacity from 500kg to 500 tonnes, means that these automated guided vehicles have opened up new applications across multiple industry sectors.

These advances in AGV technology, together with the flexibility offered by autonomous mobile robots, is already changing the concept of the production line. The increasing demand within many sectors for greater levels of flexibility, to manufacture a broader product range or to fulfil demands for product personalisation, has in some cases stretched the capacity of traditional fixed manufacturing facilities. The capability to autonomously present the right component parts on demand from the stores or warehouse with the ability to move, relocate or reconfigure different elements of the production line provides increased levels of manufacturing flexibility.

This alternative manufacturing concept is already being embraced by a number of new businesses, for example those supporting the EV sector, where AGV’s, mobile robots and other autonomous technologies are replacing the traditional concept of a fixed, indexing production line. 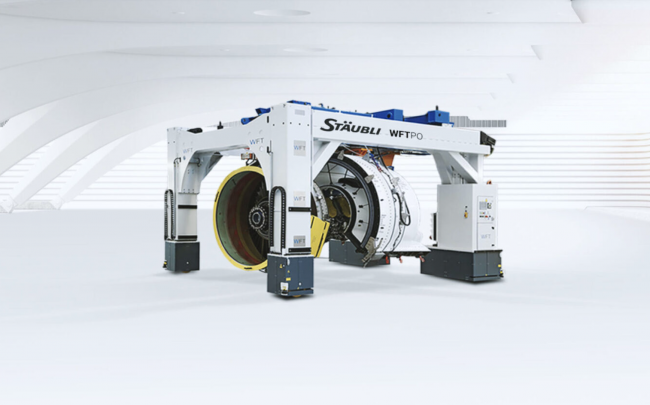 In other sectors, perhaps not normally considered to be those which would seek to automate due to the size or nature of their products, the capability of these AGV’s and MIT systems (Modular Industrial Transport) is transforming both their manufacturing and intralogistics operations. The ability of these technologies to work fully autonomously, combined with their ability to navigate a diverse array of working environments, gather their own materials and then carry out the work, is opening up a wide range of new automation opportunities.

One example of the potential which autonomous operation can bring has been demonstrated by BMW. The Bavarian car manufacturer is planning real world operation of an autonomous outdoor transport robot, also known as a car trailer. This Stäubli-WFT unit can independently transport a truck trailer from its parking space to the unloading and loading station within the plant.

The mobile platform positions itself under the trailer, then couples to it and maneuvers it to the desired location. The car trailer has a load capacity of up to 30 tons and steers through the outside area of ​​the plant using laser navigation, without the need for any additional guidelines or markings. The safety system is based on a 360-degree all-round view through sensors and cameras.

The intelligent software used by these systems also makes it possible for the AGV’s to seamlessly integrate into Industry 4.0 environments and warehouse management systems. The ability to move and manipulate significant payloads fully autonomously with high degrees of precision delivers ultimate flexibility, freeing intralogistics from the restrictions that conventional material handling systems impose.

Just as we have seen the positive impact that industrial robots have brought to our manufacturing industries in recent decades, we are now entering the next chapter in industrial automation where mobility and autonomous operation will become the norm.