I understand
Home•Interview: The future of on-street...

The UK government wants all new cars to be electric by 2040 – but with a third of UK car owners needing on-street charging points, a major infrastructure project is needed. A new partnership between Product Design company Duku, sister firm Albright IP, Urban Electric and Oxford City council is currently trialling the first ever pop-up EV charging point on a street in Oxford. Alex Lee, Director at Duku, talks about the design challenges and why he thinks this charging point could be the answer to the UK’s charging woes…

At the moment, if you live on a residential street with on-street parking it is very unlikely that you have anywhere to charge an electric vehicle without trailing a wire over the pavement from the outside of your house – which obviously isn’t practical. Public charging points are not always an option either; even in big cities the nearest facility can often be a 20-minute walk away.

It is a problem the government is doing its best to tackle, but the pace of change is slow. In the meantime, the worry is that the electric car revolution could by-pass millions of people, particularly in the inner cities. There’s a huge potential market in every single town and city that can’t really have an electric car at the moment.

So that’s where the problem came from. Essentially, if you don’t have a driveway, owning an electric vehicle is not an easy option right now. 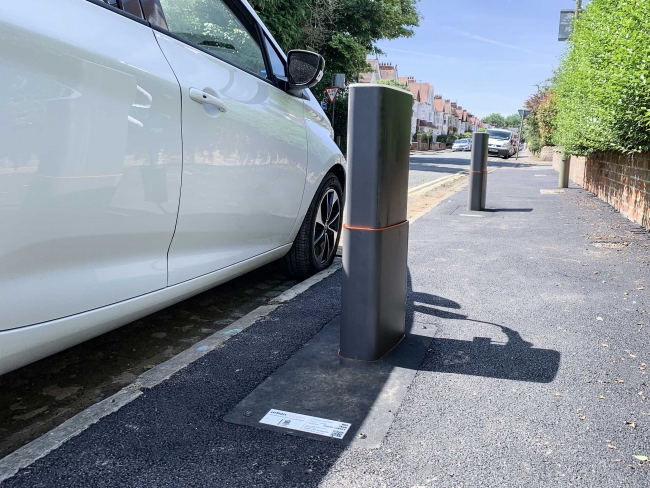 A new partnership is currently trialling the first ever pop-up EV charging point on a street in Oxford / Picture: Duku

Putting traditional fixed charging points on a residential street would cause an enormous amount of additional street clutter and I suspect it would meet a lot of resistance from residents, particularly right now when many people don’t have electric cars.

The design process for a discreet pop-up charger was incredibly challenging; the biggest obstacle was simply trying to design a system that could deal with being put underground on a British street. Our cities and towns are so old, there is always a lot of historical architecture under the ground.

Existing cabling and utilities – it’s an absolute mess below the pavement in many places. So minimising the depth below the ground while maximising the height above it, to make it accessible for all, was the initial design problem to solve.

Initially we looked at a mechanism which would, in theory, minimise the footprint of the product underground. However, there were problems with the stability of the design and we found that it wasn’t going to be strong enough. So instead we moved to a bespoke telescopic cylinder system that retracts and extends in two stages to reach the height required above ground, whilst minimising the installation depth below ground.

We had a very short 12 month timeframe to deliver this project, so we relied heavily on our 3D printers and CNC machining to build parts for them. Having 3D printers enabled us to work through multiple iterations of prototypes to get to a finalised design very quickly. Without this technology, we would never have been able to build the prototypes in time using traditional manufacturing techniques.

Once we’d solved the physical movement issues, we then had to tackle multiple secondary issues such as the constant movement of cables within the cylinder and all the sensors, safety and regulations in place for EV charge points. The design had to undergo a huge number of checks, such as ensuring the charging point didn’t rise if someone has parked a car over it, and that it won’t power up until a car is attached.

We also needed to miniaturise, waterproof and tightly package the electrical components inside to enable us to reduce the footprint of the entire system, not to mention the EMC testing that was needed to make sure it doesn’t interfere with other electrical devices nearby.

Our final design also minimises the visual impact of the charger – it’s as small as we could make it and we designed it to look modern and sleek when raised. The tapered profile wraps closely around the components inside rather than a simple cylindrical or square shape (which would have been the easy option!). When it’s in the ground, it will only be noticeable by an illuminated LED ring to show where it is. 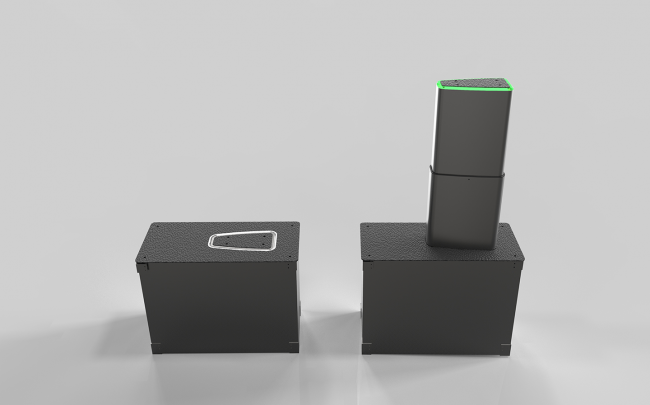 The trial in Oxford will take place for the next six months and, once completed, the project will be reviewed and how improvements can be made / Picture: Duku

The issue of control

Another issue we came across is how the chargers will affect parking on residential streets. For example, local residents mentioned that they didn’t want to attract everyone who owns an electric car in the vicinity to park on their street. On this project we have control over that, only the residents who are in the trial will be able to use them. They’re also being supplied with an electric car so that they can experience actually living with one day-to-day. In future, various ideas are being considered by Councils to ensure parking and the need for Electric Vehicle charge points will be smoothly integrated.

We have now finished putting the six trial charge points in the ground in Oxford, which in itself has been a real challenge. It was good in one way, as the trial street is by no means perfect. We had to deal with the real-world issues of narrow streets and ever changing regulations for charge points and installing street furniture kerb side.

When they were installed, the team came across cables and gas pipes that shouldn’t have been there (according to the plans) but again, this is something that will be common in many of the UK’s streets. The weather has also been interesting in July with a mix of some of the hottest and wettest days on record, so we can see how well they deal with extreme heat and being submerged in water.

The trial will take place for the next six months and, once complete, we will be able to review how they worked and how we can improve them. We are already working on improving the assembly process, the overall design and futureproofing the systems. For the immediate future, we are just looking forward to seeing them in action.