Friction stir welding (FSW) is the optimal process for non-ferrous metals with low melting temperatures and for mixed metal joints. KUKA has applied its expertise in this area for a major car manufacturer and has so far successfully put three friction stir welding cells into production resulting in the highest welding quality combined with green technology. This has not only optimized the thermal management of plug-in hybrid batteries but also enabled the complex structure of the storage housings to be implemented economically.

Electric cars need a “feel-good” temperature – at least their batteries do. Because only when they are at the right temperature they perform optimally and achieve maximum service life. The batteries therefore need to be cooled during operation and warmed up when the ambient temperature is low. In plug-in hybrid vehicles in particular, this task is performed by cooling systems that are integrated into the bases of the battery carriers. The production of these housings is extremely difficult and therefore offers an optimal application for robot-based friction stir welding processes.

This was also recognized by a major car manufacturer, which initially manufactured the battery housings using glue and screws. However, when this process did not bring the desired success, the company looked to the market for a new solution. The demands on the battery housings are high: The evenness of the module mounting surfaces, the tightness of the end holes and the requirements of the pressure tests must be guaranteed. With robot-based friction stir welding, KUKA offered the automaker a process-safe and economical method in the area of plug-in hybrid vehicles, which guarantees the safety and functionality of the battery housings. 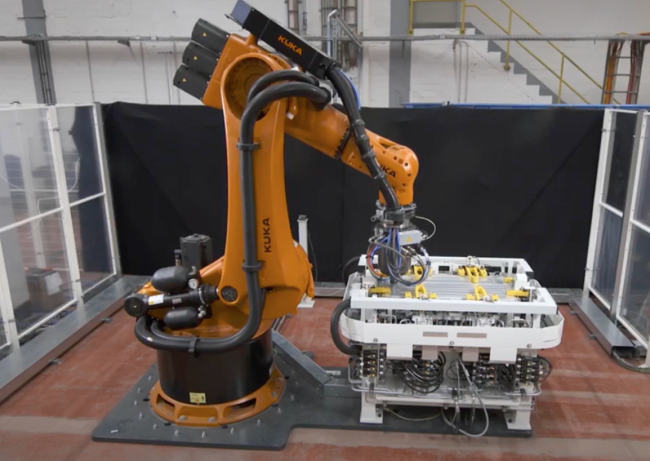 KUKA supported the customer from the initial requirement through testing to delivery. “We had already developed prototypes and run them through various tests. In feasibility studies, we tested the weldability, performed reachability analyses and process simulations. When all the tests turned out to be more than satisfactory, we installed the system at the customer’s site,” explains Stefan Fröhlke, Senior Manager Process Solution FSW at KUKA. The KUKA cell4_FSW friction stir welding cell, which was developed specifically for the growing electromobility market, offers maximum versatility and configuration options in addition to outstanding economic efficiency thanks to its modular concept.

Advantages of friction stir welding with a fixed shoulder

To seal the cooling system of the plug-in hybrid vehicles, friction stir welding is used to join the base plate to the cast housing precisely along the cooling channels. For a pressure-tight circuit that can withstand the alternating pressure, a large connection cross-section and a well-mixed and compacted seam are required. “Friction stir welding has proven to be a suitable joining technology, since the components distort as little as possible due to the heat input,” explains Stefan Fröhlke. For this, KUKA relies on stationary shoulder friction stir welding (SSFSW). This means that, unlike in conventional friction stir welding, only the welding pin rotates in a stationary shoulder. This produces a flat, smooth seam surface during the feed movement along the weld seam. This reduces the effort required for postprocessing.

Further benefits for the customer from the KUKA cell4_FSW welding cell: thanks to high rigidity and durability, heavy-duty robots from the KR FORTEC series can ensure increased path accuracy on large components. “At the same time, our process control and documentation (PCD) system allows the customer to track all the key process parameters and have quality data recorded transparently,” emphasizes Portfolio Manager Till Maier. In this way, KUKA has created a basis for the integration of Industry 4.0, because the simple exchange of data with KUKA Remote Service enables, among other things, rapid assistance and prevents longer downtimes. 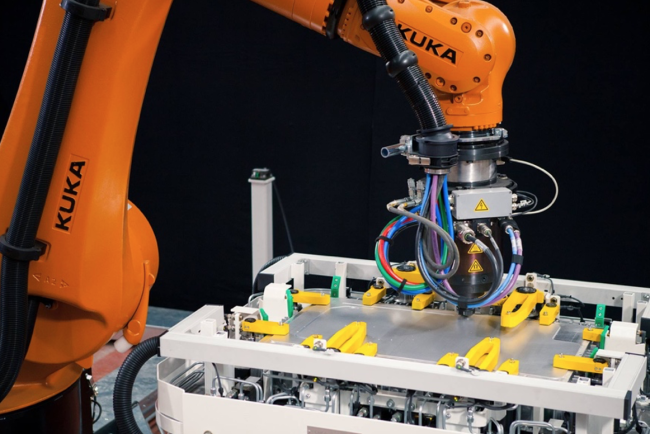 However, the process is not only economical and of high quality, but is also considered a green technology. “Thanks to low energy consumption, friction stir welding is environmentally friendly, and there is also no need for fume extraction or anti-glare measures,” explains Stefan Fröhlke. This combination of quality, economy and sustainability has convinced the customer.

After a prototype and test phase, the first cell was put into production in Germany for the first time back in 2016 and has since served as a blueprint for other cells in the Group. As part of the expansion of friction stir welding capacity, the automaker restructured process responsibility and handed it over to its subsidiary in Sweden, which built a new hall specifically for this purpose. In the course of this, two additional friction stir welding cells were ordered from KUKA.

The first cell moved to Sweden in September 2020, and preliminary acceptance of the two new KUKA cell4_FSW cells took place in Augsburg in May 2021. Just two months later, in July 2021, the two cells were commissioned at the customer’s site. The improvements compared to the first cell impressed everyone involved: by automating the complex hydraulic clamping system, the total cycle time, including component handling, was reduced from 20 to 15 minutes; at the same time, the optimization of the clamping system improved the quality of the product. 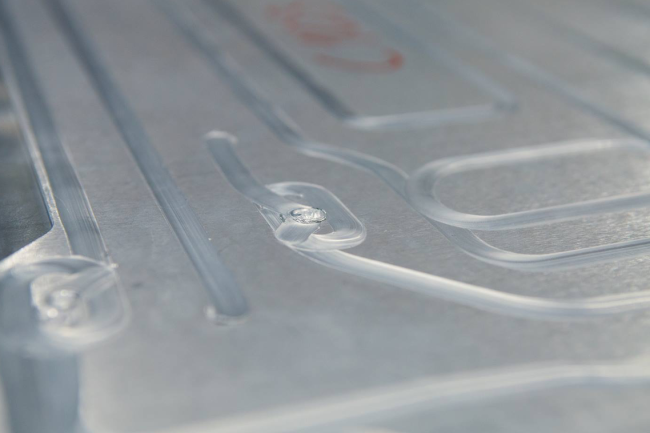 The requirements for the safety-critical components of the battery housings were extremely high: The seam had to be able to withstand a very high burst pressure, which had to be proven by a strength test. Special clamping devices and welding tools had to be newly developed together with the welding parameters. This was only possible with FSW technology, since different aluminum alloys (wrought alloy to aluminum die casting) had to be welded.

In addition, fast delivery within six months was the condition for placing the order. Thanks to KUKA’s expertise in this area, all the requirements were met. The customer expressed the greatest possible satisfaction: “The cooperation was very open, trusting and goal-oriented,” emphasized project manager Adel Ben Hassine, Sales & Proposal Engineering at KUKA, “and the customer was surprised at how quickly the implementation took place.” In addition, a benefit in terms of sustainability could be achieved: “The tools were further developed together with the customer in such a way that the service life of the pins has now doubled.”