Britain’s manufacturers are calling for a National Recovery Plan, including an immediate stimulus package, to boost investment and help save jobs on the back of a major survey showing that output in the sector plunged to a record low as the full impact of the crisis hit home.

The Make UK/BDO Manufacturing Outlook Q2 survey comes on the back of the historic fall in GDP and shows the balance for output reached the lowest level in the thirty-year history of the survey, surpassing the previous record lows seen during the worst of the financial crisis.

Furthermore, both UK and export orders plunged and while the furlough scheme appears to have mitigated the worst impact of immediate redundancies, evidence suggests that without government intervention to free up firms to invest again this has merely delayed large scale redundancies in addition to those already announced in the aerospace and automotive sectors.

Given the outlook for the rest of the year and into 2021, Make UK is calling on the government to work with business and other key stakeholders from across the UK on a National Recovery Plan. In the short term this should begin with an immediate stimulus package beginning with a business rates holiday for manufacturers similar to that granted to the retail sector earlier this year. Make UK believes this would be the single most important measure the chancellor could introduce having the quickest impact for companies of all sizes and across all sectors.

Britain’s manufacturers are calling for a National Recovery Plan, including an immediate stimulus package, to boost investment and help save jobs according to the latest Manufacturing Outlook survey / Picture: Getty/iStock

This should be accompanied by other immediate measures including a National Infrastructure Strategy with a commitment to immediate projects to help supply chains, a car scrappage scheme and incentives to invest in digital technology and skills. Make UK also reiterated its previous call for government help for recapitalisation to direct support at key sectors and companies, in particular, to allow companies to access capital to service debt incurred during the lockdown.

Stephen Phipson, chief executive of Make UK, said: “These figures graphically illustrate the severity of the crisis facing manufacturers of all sizes and in all sectors right across the UK. As with all other crises, however, the sector will find a way to recover though there is no disguising the immediate months and perhaps years ahead will be some of the toughest industry has ever faced.

“To help get the UK economy and manufacturing back on its feet as we emerge from lockdown it is vital that every part of government puts its shoulder to wheel with a National Recovery Plan for the short and long term. The chancellor can lead this charge with an immediate package of measures to provide the consumer and industry with the shot in the arm they need.”

Tom Lawton, head of manufacturing at BDO, added: “With output plunging and order books shrinking, many manufacturers have had to ditch their investment plans and rethink their priorities. While the short-term support packages offered to date have provided a lifeline, it’s becoming increasingly clear that the government needs to develop a comprehensive strategy to provide long term stability for the manufacturing sector. This could include direct support for some of the country’s largest manufacturers that so many small and mid-sized suppliers rely on, in addition to new incentives to encourage investment in digital transformation and productivity improvements.

“With Covid-19 causing instability in global supply chains and uncertainty surrounding our future trading relationships, the UK will become more reliant than ever on its manufacturing sector. Now is the time for the government to step up and show its support.”

According to the survey, output reached a record low of -56%, while both UK and export orders fell to -52%, comparable to the levels seen during the worst of the financial crisis. Export orders had turned negative last quarter for the first time since 2016 showing that demand in major markets was already slipping, a situation the Covid crisis has exacerbated.

The prospects for the next quarter appear little better despite the easing of lockdowns across Europe and Asia with the forward-looking indicator of output for the next three months at -42%, the worst ever predicted in the survey’s history. Whilst a slight improvement is in store for total orders in the next quarter at -41% it remains an extremely distressed balance historically. 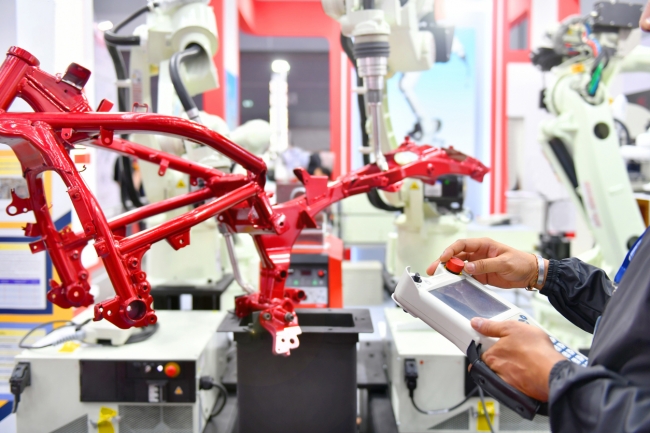 Make UK believes a business rates holiday would be the single most important measure the Chancellor could introduce to support the sector currently / Picture: Getty/iStock

All sectors suffered a severe drop in output with those closely connected to the automotive, aerospace and construction sectors suffering very badly. Especially concerning were the levels reached by those sectors connected with investment in capital and automation – machinery equipment -70%, electrical equipment -67% and electronics -54% – all of whom serve as a proxy for investment in new technologies across the wider economy. Overall, just 11.7% of companies said they were operating at full capacity.

As with the impact on output and orders, both employment and investment levels were cut back significantly. The employment balance fell to -22% indicating that many companies are already going ahead with redundancies and, without the job retention scheme, it is highly likely the employment figures would have reached the worst levels in the survey’s history. The likely pattern for job cuts for the rest of the year is highlighted by the employment balance accelerating further in the next three months to -36%.

Having appeared to turn a corner at the start of the year after the greater certainty provided by the election and leaving the EU, the picture for investment has now gone into reverse falling to a balance of -26%. 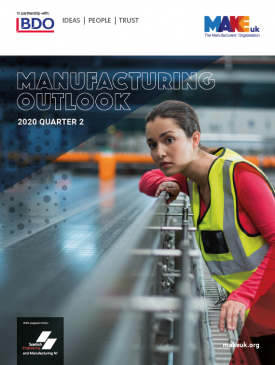