I understand
Home•Port redevelopment in Scotland to...

In the 1970s, Ardersier – a vast and currently unused port 14 miles east of Inverness – was one of the largest oil rig fabrication yards in the world, employing up to 4,500 workers. At over 400 acres, and with more than a kilometre of quayside, Ardersier is the largest brownfield port in the UK.

Now, new owners are transforming Ardersier Port into Europe’s first fully circular energy transition facility – recycling the oil rigs of the past to make foundations for future fleets of floating offshore wind farms. It is anticipated thousands of long-term jobs will follow.

Work is about to begin on a £20m, nine-month ‘capital dredge’ – removing 2.5 million cubic metres of sand (equivalent to 1,000 Olympic swimming pools) – which will open up the massive port once more. 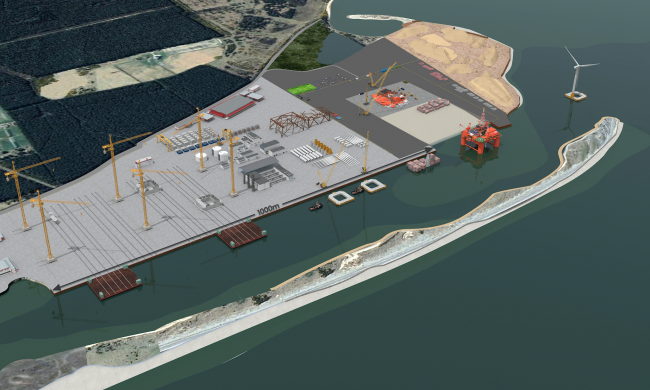 Work is about to start on a port redevelopment in Scotland that will unlock a huge investment in manufacturing worth hundreds of millions of pounds / Picture: Ardersier Port Authority

Over the next five years, the port’s owners will deliver:

This will create the largest floating wind foundation fabrication, manufacturing and assembly facility in the UK – in an offshore wind market predicted to deliver 29,000 jobs and £43.6bn to the UK economy by 2050.

Already, Ardersier Port has an agreement with floating wind specialist BW Ideol, guaranteeing exclusive access to the port for the manufacture of its concrete floating wind foundations.

Once the dredging is complete next summer, Ardersier Port will build a bespoke slipway that will allow floating oil and gas structures to be hauled onshore prior to removing all contaminants and decommissioning them.

A report published by industry body Oil & Gas UK estimated there will be more than a million tonnes of North Sea topsides (the part of an oil rig above the waterline) coming ashore this decade, much of which can be recycled. 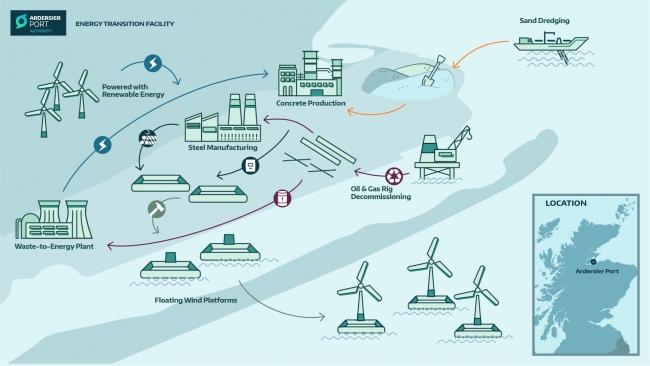 Ardersier Port co-owner, Steve Regan, said: “The UK has set a world leading net zero target to build back better, support green jobs and accelerate our path to net zero. At Ardersier, we can lead the UK’s Green Industrial Revolution by using circular economy practices to deliver new low carbon infrastructure built on the by-products of our oil and gas past.

“This is a once in a generation opportunity to create a world-leading industrial and offshore wind manufacturing facility here in the UK. It is a simple plan where each element makes commercial sense as a stand-alone project – but when combined, the benefits to the economy, and the environment, are multiplied.”

Co-owner, Tony O’Sullivan, added: “The energy transition from offshore structures to floating wind has an important missing factor: steel. Today, the UK exports ten million tonnes of scrap steel annually. By building a new renewable-powered electric arc furnace at Ardersier Port, the first new-build steel mill in the UK for 50 years, we will utilise a million tonnes of scrap each year. This will produce reinforcement steel for the UK construction industry, of which there is currently a shortfall, allow for the onsite construction of floating wind platforms, and enable us to export green steel to global markets.

“This strategic approach has been backed by a recent independent report by Zero Waste Scotland and once complete, our green steel mill will be revolutionary: it will be the only place in the world where the scrap from decommissioning is processed into steel. Once operational, this plant alone will generate 300 high quality permanent low carbon jobs.” 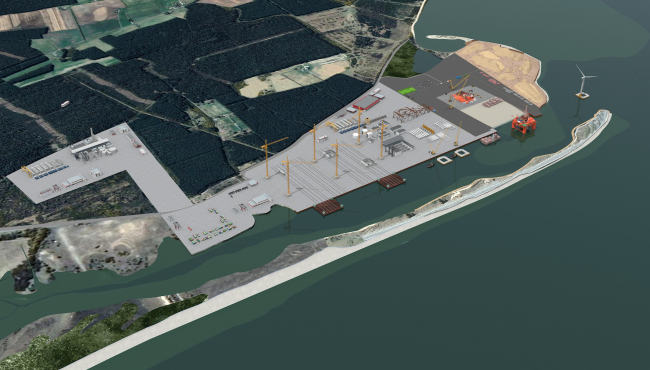 One of the investments would be a £300m green steel plant, powered by offshore wind and energy from waste/ Picture: Ardersier Port Authority

BW Ideol is one of three partners (together with Elicio and BayWa r.e) in the Floating Energy Allyance, which has submitted applications for offshore wind development rights in the ScotWind leasing round run by Crown Estate Scotland, with a decision due early next year. The Allyance has pledged to manufacture all its floating concrete foundations in Scotland, creating almost 4,000 jobs.

BW Ideol’s CEO, Paul de la Gueriviere, said: “The lack of large infrastructure is a bottle neck to deliver the number of floating foundations required for the UK market’s ambitious development plans, both in terms of local content and the production rate expected. Ardersier Port is a unique facility to unlock these constraints.

“In comparison to steel foundations, floating wind offers a unique opportunity to combine both price competitiveness and local manufacturing, thanks to BW Ideol’s unique concrete floater solution. As an early mover in the market, we have engaged with the port’s owners for several years, sharing a joint vision to create a circular and sustainable local supply chain.

“By securing exclusive access to Ardersier Port, BW Ideol is reaffirming its commitment to manufacture its floating foundations locally, maximizing the benefit for Scotland and the rest of UK, without conditions.”

Earlier this month, the UK government announced up to £160m in new funding to kickstart the rollout of large-scale floating offshore wind ports and factories across the country, and it is expected Ardersier Port will bid for these funds.