This week’s roundup sees GKN Aerospace announce a new £32m Global Technology Centre in Bristol; Bodycote, Forthglade and SNOP all invest in new UK facilities; plus a look at what the future holds for Formula 1 in 2019…

The Secretary of State for Business, Energy and Industrial Strategy, Greg Clark, and the Chief Executive of GKN Aerospace, Hans Büthker have revealed plans for GKN Aerospace’s new Global Technology Centre (GTC) in Bristol. The new centre – funded by a £17m commitment from GKN Aerospace and a £15m commitment from the UK Government, through the Aerospace Technology Institute – is expected to open in 2020. Once open, the 10,000 square metre facility will host 300 highly skilled engineers and also serve as a base for GKN Aerospace’s partnership in the Airbus’ ”Wing of Tomorrow” technology programme. The Bristol centre joins a growing list of GKN Aerospace Centres of Technical Excellence around the world. Each centre has a unique technology focus – covering additive manufacturing, thermoplastics and smart aero-engine systems. Chief Executive of GKN Aerospace, Hans Büthker said: “GKN Aerospace can trace its engineering heritage back to the 18th century and we are proud of our role as a leading player in the UK’s world leading aerospace sector. The GTC will ensure we  continue to develop new technologies that deliver for our customers, making aircraft more sustainable and economical. It will also support our 4,000 strong workforce in the UK, ensuring they remain at the cutting edge of the global aerospace industry.”
Read more 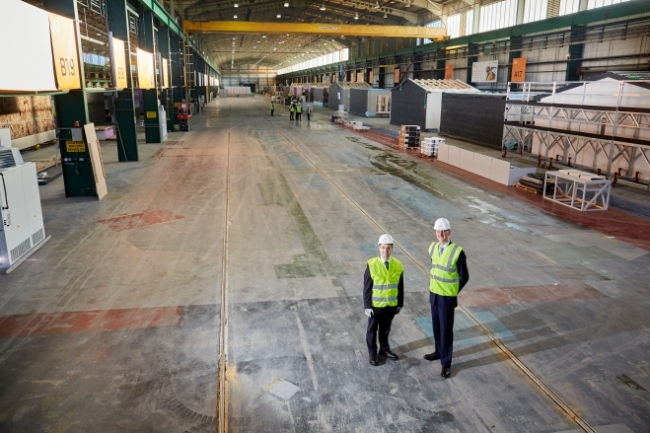 The frame of the first factory on a ground-breaking new development is rising into the sky after it was announced French car parts manufacturer, SNOP, is relocating to the International Advanced Manufacturing Park (IAMP), creating more than 100 new jobs. SNOP has committed to move its team to a £15m manufacturing plant on the IAMP, a nationally significant development site close to Nissan, that is expected to become home to more than 7,000 jobs. The company, which makes components for the likes of Peugeot, Audi, Renault, Mercedes, Volkswagen and Seat, as well as Nissan, will be the first to relocate to IAMP. The frame of the firm’s new factory – which is being constructed by North East-based Howard Russell – is now fully in place, with work set to complete in spring. SNOP will take more than 17 acres of the first phase of IAMP, opening a 235,000 sq ft state-of-the-art factory and office space, with the potential to expand to 331,000 sq ft. With the additional capacity created, the company expects to see turnover grow from 54m Euros to 90m, with an additional 100-150 jobs created in the process, on top of the firm’s existing 250-strong team.
Read more 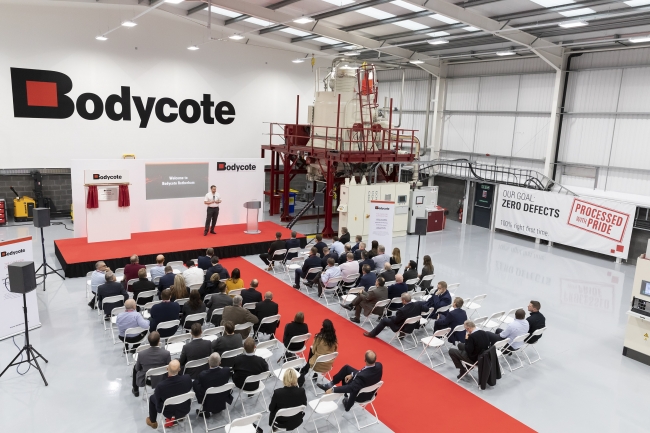 Bodycote, the world’s largest provider of heat treatments and specialist thermal processing services, has opened its brand new facility on the Advanced Manufacturing Park (AMP) in Rotherham, Yorkshire. The new advanced heat treatment centre, now fully operational and supporting customer requirements, has been established to support the aerospace and power generation markets in the UK and Europe. The Rotherham facility was officially opened by Andy Greasley, Executive Vice President of Rolls-Royce’s Turbines Supply Chain Unit, in recognition of the enduring partnership between Bodycote and Rolls-Royce. Andy Greasley said: “Heat treatment and processing is a vital part of our supply chain and Rolls-Royce are delighted to be supported by Bodycote on the Advanced Manufacturing Park in Rotherham. Close coupling of this capability to our own Rolls-Royce business is critical for our future success and our relationship with Bodycote is one that we truly value.”
Read more 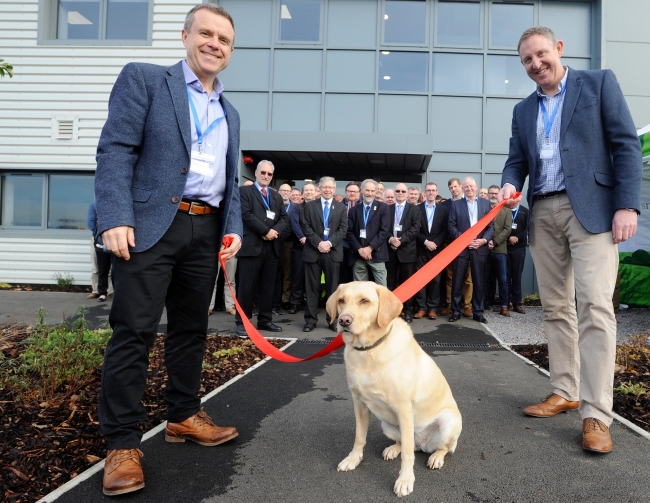 Devon-based natural pet food firm, Forthglade, has officially opened its brand new 70,000 sq ft factory. The new factory based at Okehampton, right next to Dartmoor National Park, will support Forthglade’s ambition to become the UK’s leading natural pet food manufacturer and is set to increase the already 130-strong local production team to 150 staff over the next few years. Established in 1971, and previously based in Winkleigh, Forthglade’s purpose-built factory will be crucial for the company to meet the high demand of its award-winning natural pet food, which last year produced 40 million healthy meals for dogs. The new factory is set to double this production figure. The development took 15 months to complete. The new factory will ensure the highest standards of quality and food safety, as well as raise the company’s green credentials with the use of recyclable white trays and sleeves, recycling water and by using excess steam from the production process to also heat its offices. To celebrate the launch, Forthglade donated over 6,000 meals to three local Devon charities that have dogs in their care. Veterans With Dogs, ARC – Animal Rescue Centre and The Blue Cross. Today, Forthglade’s 100% natural dog food is sold in major supermarkets including Waitrose, Sainsbury’s, Morrison’s and Tesco, as well as UK pet shops, online and exporting oversees to 11 countries.
Read more 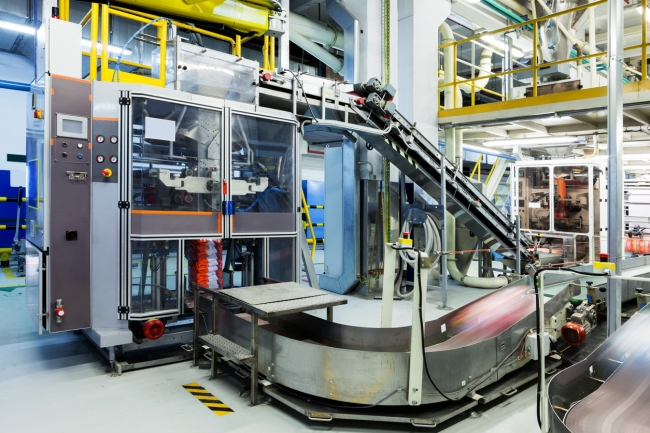 Once again, the UK manufacturing industry shows strength and resilience, recovering from October’s disappointing data, as the IHS Markit/CIPS UK Manufacturing Purchasing Managers’ Index for November posts an improved, stronger 53.1 figure, compared to October’s 51.1. Output increased in November and there was a rise in new orders, although the domestic market provided more business than exports, given the uncertain political climate. New product launches and building stock were credited as the reasons for the lift in new business. New export business fell for the second month in a row amid Brexit and trade war concerns. Conversely, the consumer goods sector saw an increase in new exports. Atul Kariya, manufacturing sector lead and partner at MHA MacIntyre Hudson, said: “UK manufacturers, while remaining upbeat about the future of the industry, are taking every step to protect their businesses from the unknowns of Brexit, in particular, exploring the Plan B scenarios. Companies are planning new product launches, marketing strategies and spend, machinery investment and expansion, while reinforcing their existing and potential international trading relationships. Solid contingency plans and evolving corporate strategies are playing a vital role in business growth and survival during times of turbulence, with a flurry of activity taking place now to secure a strong future.”
Read more

Overseas investment into the UK at highest ever level – largest growth recorded in the manufacturing sector https://t.co/P6uYUC7cHZ #UKmfg #GBmfg🇬🇧 pic.twitter.com/wQLM2TAhuf

We’re delighted to announce the opening of our new @lloydsregister certified moulding facility in Wroxham, strengthening our commitment to quality and safety at sea. Find out more about this exciting partnership here: https://t.co/3MFUHRQa4k #OysterYachts #OysterNews pic.twitter.com/3lQ1DKgQcg

Great #article about #WomenInSTEM !
The traditionally male-#dominated #Engineering #industry is now changing as a #wealth of young female #Talent floods the industry
At Bromford, we #value & #Support all women who are part of our always-growing team#Manufacturing @IMechE #STEM https://t.co/zwnPXgGb7x

1. How the industrial strategy fares one year on / via @CityAM

Big ambitions and grand challenges – it’s been a year since the government’s industrial strategy was launched. In this comment piece, Ben Morgan, head of the Integrated Manufacturing Group at AMRC Factory 2050, looks at how the strategy fares one year on.
Read more

2. Educating children for the jobs of the future / via @raconteur

In an uncertain world, the only certainty is change. By 2030, robots, artificial intelligence, automatons, call them what you like, will have displaced up to 800 million workers or one fifth of the global workforce, according to McKinsey Global Institute. The inexorable and exponential march of technology will create new jobs, but what are those roles likely to be and how should we prepare?
Read more

Sheffield has had a superb year in manufacturing and possibly its best in a generation, prompting business secretary, Greg Clark MP, to write for The Star’s ‘Manufacturing Perfection’ supplement.
Read more

1. Formula 1: seven key issues facing the sport’s bosses for the 2019 season / via @BBCSport

Formula 1 has the ability to provide young people with an exciting insight into the world of engineering, yet Formula 1’s bosses are heading into 2019 facing a critical period as they try to impose their vision on the sport. Liberty Media’s stewardship has produced mixed results since the US group took over in January 2017. There is a more open atmosphere in F1, and a new race in Vietnam in 2020, but a number of historic, high-profile races are under threat and teams’ prize money has consistently dropped over the past 18 months. Technical rule changes planned for 2021 have not yet been revealed, income distribution still remains a talking point and for the first time since the mid-1970s, live broadcasting of F1 will be almost non-existent on free-to-air television in the UK next year. This article looks further at what the future holds for Formula 1 in 2019.
Read more

2. It’s good to talk: why the phone call needs to make a comeback / via @bbcthree

While we used to think nothing of using our mobile phones to make calls, we are now doing that less. Ofcom reported that in 2017 mobile voice calls dropped for the first time ever in the UK. And even though the voice call may be in decline, we’re actually using our phones more than ever, with 18-24 year-olds using theirs for an average of three hours and 14 minutes per day. But while we may be the so-called ‘connected generation’, we are also a generation that has become increasingly lonely – and now it’s suggested there might be a correlation. Here’s what happened when Natalie Ktena stopped texting for a week and picked up the phone instead.
Read more