CHICK workholding equipment, supplied in the UK through sole agent 1st Machine Tool Accessories, is helping to increase productivity and efficiency in the machine shop of Axminster Tools & Machinery.

The company is an online and high street retailer of tools and machinery that it imports from global suppliers. However, it chooses to manufacture some machine accessories, notably jigs and chucks, including the popular Clubman SK80 woodturning chuck, in-house to ensure consistently high quality.

Historically, standard wind-up vices were used to fixture components for machining on CNC mills and machining centres, but as production levels rose they became too inefficient. Several years ago, a new, still on-going job came along that required particularly accurate clamping of multiple small parts, namely steel jaws for chucks. 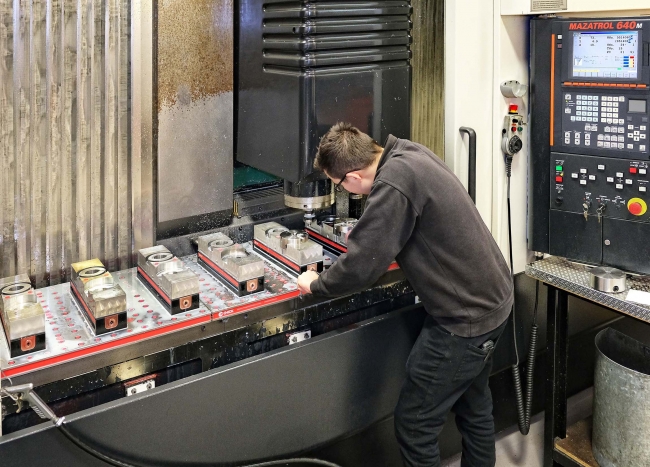 Conventional vices were not suitable, as it was impossible to present a sufficiently large number of parts to the spindle. An initial workholding solution was to use a steel fixture plate machined to retain the parts by bolting them individually into position. The problem with that was the two hours it took to change over to produce the next batch.

To provide a solution, 1st MTA proposed its CHICK Qwik-Lok system. It significantly reduced set-up times, as the jaws secure components quickly and to high repeatability for milling and drilling. One large part can be clamped between two jaws but to allow more parts to be loaded at a time, more usually a pair of components, or multiples, are held in two stations. Aluminium jaws machined with the profile of the parts to be held ensure they are retained firmly during machining.

Turning a single handle advances the two movable Qwik-Lok jaws simultaneously towards a fixed central jaw to clamp the parts, which also has the effect of cancelling the opposing forces and creating a reliable reference point for machining. A beneficial side effect of clamping more parts faster was a rise in walk-away time, allowing operators to be more productive in other parts of the factory.

Once Axminster Tools & Machinery adopted this procedure, clamping several steel mounting jaws in each Qwik-Lok station, productivity was dramatically increased. The machine operator is able to change over up to six Qwik-Loks on a vertical machining centre (VMC) table in half an hour, four times faster than when previously using the bespoke steel fixture plate. Moreover, the latter had the drawback of potentially causing damage to the cutter in the event of a programming error, whereas this is not the case with aluminium jaws.

The machinable soft jaws were soon found to be a versatile solution to other clamping problems, such as how to retain chuck bodies without the risk of the cylindrical components rotating during machining. Again these parts were previously bolted to a fixture plate, necessitating a half-hour set-up time, whereas now the bodies are swapped in the line of Qwik-Lok jaws in a couple of minutes.

Axminster Tools & Machinery initially decided to mount the units directly onto the machining centre table, but it meant that when a clamp was removed it was time-consuming to realign the unit for a new job. To avoid this, two years ago, Jake Knight, head engineer at the Innovation and Manufacturing Department in Axminster, decided to invest in a CHICK foundation plate for two 3-axis VMCs on-site, a Mazak VCN-530C and one of a pair of VTC-200Ms. 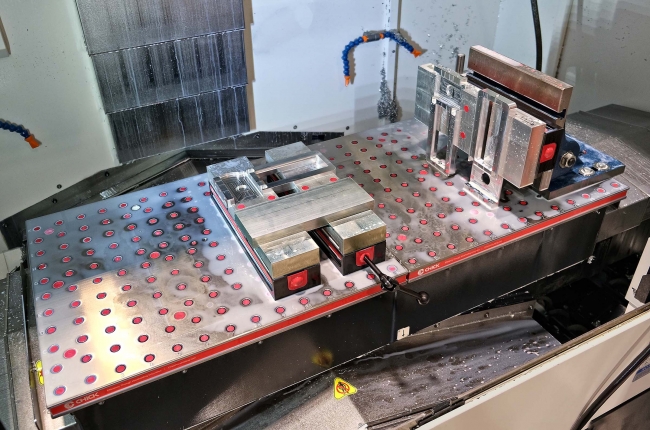 Manufactured to suit the size of the machining centre table, the cast iron plates have a grid of accurately drilled holes at 50 mm centres with hardened bushings and threads at each location that allow Qwik-Loks to be positioned anywhere over the surface rapidly and repeatably to an accuracy within 10 microns. The use of round and diamond pins at two positions allows the Qwik-Loks to be located and mounted quickly and easily.

Alpha-numeric labelling of the grid enables unerring relocation of each base and jaw set so that the same program can be used every time a job repeats. All unused holes in the plate are sealed with plugs to prevent the ingress of swarf, which could compromise location accuracy.

Mr Knight said, “Overall, we use about 20 Qwik-Lok bases and have three times as many soft jaw sets machined to hold a multitude of components that we machine from stainless and other steels through to aluminium and plastics.

“We have chosen CHICK’s 1040 base size, with a jaw width of 100 mm and an overall length of 400 mm, as this supports a majority of the components and accessories we produce for the products in our catalogue.

“In another project, 1st MTA also regularly supplies us with machinable steel chuck jaws for our four Mazak turning centres. They are especially useful for clamping various rotational parts to a high degree of concentricity for turning, such as chuck bodies for our woodturning lathes.”