Subcontract machining of plastic parts constitutes the vast majority of output at the Gloucester factory of Stratos Precision Engineering, where the production of a particular component was causing problems that were exacerbated by the need to produce around 5,000 per year.

It is an acrylic manifold block for a flow control device that previously had to be clamped three times in conventional vices mounted side by side on the table of a Haas VF4 vertical machining centre. This process has been replaced by a more modern clamping system based on a four-sided tombstone and indexing trunnion supplied in October 2018 by 1st Machine Tool Accessories.

Specifically, the solution is a US-manufactured Chick Indexing Subsystem. It comprises a Multi-Lok having four faces each carrying a twin-position Qwik-Lok clamp that secures two parts at once against a central jaw each time the handle is wound to closure. The whole arrangement is mounted horizontally on a fourth CNC axis comprising, in this case, a Haas HRT210 rotary table and a Chick tailstock. The benefits of what appears to be a relatively simple change in workholding practice has been remarkable. 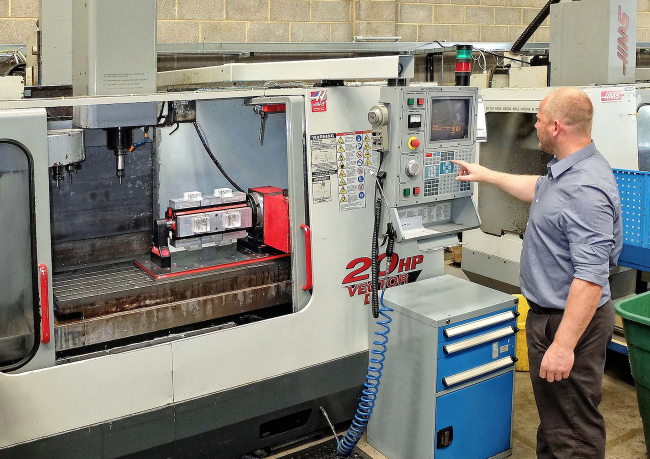 1st MTA supported Stratos Precision Engineering with a workholding solution that has doubled productivity for one of its plastic components / Picture: 1st MTA

Most notable is that the operator is now able to fixture eight plastic billets at a time, close the machine doors, walk away for an hour to do other jobs, and return to unload eight parts machined on three faces, ready for a second operation to mill away material from the back face. Previously, the three cycles were carried out sequentially in individual vices mounted on the machine table. It meant that the operator had to be in almost permanent attendance to open the doors, reset the components and close the doors to be able to extract one finished part every 15 minutes, i.e. four per hour.

Production output is thus doubled, despite the cutters being in contact with the material for a similar length of time. The saving comes purely through less handling of the components coupled with the opportunity to program fewer tool changes. One cutter can move around at least two parts rather than one, and potentially eight if the cycle time can be lowered by rotating the trunnion rather than exchanging the tool when machining any given feature.

The other major advantage of the new workholding solution provided by 1st MTA is a reduction in scrap from around one part in 20 to virtually zero, as the risk of tolerance build-up through repeated refixturing is eliminated. Previously, if the operator did not blow swarf comprehensively from all of the vice jaws, the resulting misalignment of the component in any one of them meant that features could fall outside drawing tolerance, which is down to ± 0.05 mm.

With parts set up nearer to eye level due to the additional height provided by the trunnion, and the fact that it indexes through 360 degrees during the hour-long cycle so a lot of swarf falls away, management of chips in the jaws is much easier and in practice workpieces always seat correctly in the Qwik-Loks. The only time a component now has to be scrapped is if a tool breaks in-cycle, which is rare when cutting plastic materials. 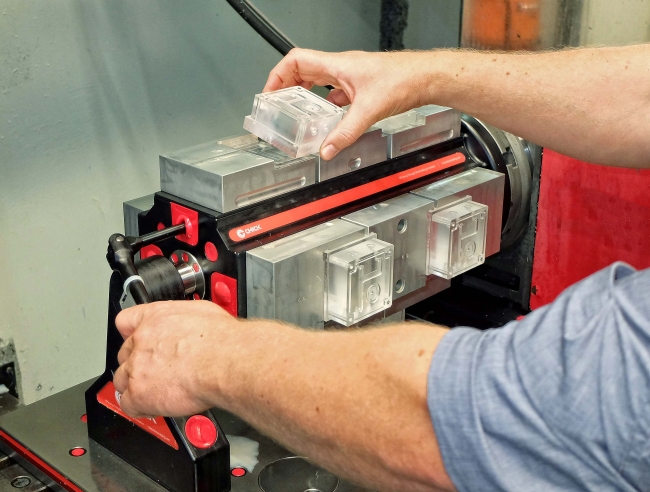 As well as doubling output, the new workholding solution provided a reduction in scrap from around one part in 20 to virtually zero / Picture: 1st MTA

Jonathan Caple, Managing Director and joint owner of Stratos Engineering with business partner and Operations Director Mark Vine said, “We are delighted with the efficiency of the new Chick workholding system and so is our customer.

“They visited to see the new production process and have been so impressed that the occasional bottlenecks and supply interruptions have been eliminated that it prompted them to award us additional work.”

He added that two other jobs including a round component have already been put on the Chick Multi-Lok using other sets of suitably machined aluminium jaws to hold the parts securely. A similar doubling of production output has resulted in both cases.

From working for a single customer in 2013 to currently having 170 on its books spanning numerous industries from food and drink to oil and gas, Stratos Engineering has made considerable progress in just six years. A doubling of factory area within six months of starting and a further doubling in 2015 to currently 8,000 sq ft gave an indication that the subcontractor’s rise would be rapid.

Specialisation in machining plastics that many subcontractors avoid is one reason for the company’s success. Another is the regular purchase of modern CNC machine tools – the company currently operates five lathes up to 650 mm diameter capacity, five machining centres with up to 1,217 mm X-axis travel, two routers for material up to 3 metres x 2 metres and a turret mill. Up-to-date manufacturing practices on those machines, such as the use of Chick workholding, coupled with good service and delivery will undoubtedly see that success continue.