I understand
Home•Case Study: How to organise...

Case Study: How to organise a ‘pick-up’ in a brewery

While brewing in Britain pre-dates the Roman invasion in 54AD, its evolution has helped to propel the food and beverage industry to become the country’s largest manufacturing sector. As techniques have been honed over the subsequent centuries, numerous breweries have established themselves as household names. Adnams still operates out of its original 18th century site in Southwold, but its commitment to tradition has not stopped it implementing a 21st century end-of-line automation solution.

“Adnams Brewery has been in Southwold since 1872,” said Fergus Fitzgerald, Head Brewer at Adnams. “We brew mostly cask beer but we have invested in expanding our range over the last few years to include a variety of keg beers, as well as a distillery. It’s quite a changing brewery really.

“We can brew up to 40 different beers over the course of a year – we have our core beers that we do day-in, day-out, but we also have our seasonal beers and one-offs too. We brew about 100,000 barrels a year – although by barrel I mean a brewer’s barrel – which is 163 litres.”

The brewery still operates out of its original site at the heart of Southwold, and produces the equivalent of 1,900 barrels of beer a day. However, fitting a 21st century brewery into a 19th century building has proved to be an on-going challenge for Fergus and his team, as they have looked to keep pace with modern brewing methods and rapidly expanding consumer demands for a much wider portfolio of beers and spirits.

One area where the brewery has looked to take serious strides forward is the introduction of automation; and more specifically, the use of robotic end-of-line palletising systems to process the beer barrels once they have been filled. 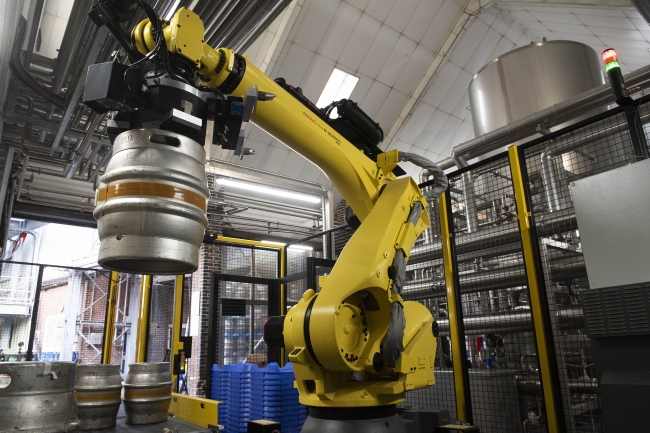 Embracing automation – Adnams now use robotic end-of-line palletising systems to process the beer barrels once they have been filled / Picture: FANUC

Fergus continues: “While we’ve expanded our portfolio in recent years, cask beer very much remains a core part of the brewery. At the end of our main cask filling line – where we put the beer into the barrels – we had an old palletiser which took up a lot of space. Given where the brewery is located, we’ve got a very limited amount of space, so we have to be quite creative when it comes to using it as effectively as possible.

“We had identified a new piece of technology that we wanted to install to allow us to brew a 0.5%-alcohol version of our Ghost Ship Pale Ale, but we had exhausted all available floorspace. However, by upgrading the old palletiser to a more compact automated solution, we figured we could accommodate everything within the existing brewery site. We actioned this in early 2018 and approached FANUC to design a robotic end-of-line loading system.”

In order to meet the significant load demands of handling metal barrels filled with over 160 litres of beer, FANUC specified its R-200iC/210L 6-axis palletising robot. With a maximum payload of 210kg, it could comfortably process the full casks at the required rate of 250-300 barrels an hour, to keep pace with the beer as it came out of the filling line. With a compact footprint of 771mm x 610mm, and a reach of 3100mm, it can easily operate within the confined working environment of the brewery. Crucially, the robot body is IP54 rated, to protect it from the residual beer found throughout the cask filling line. 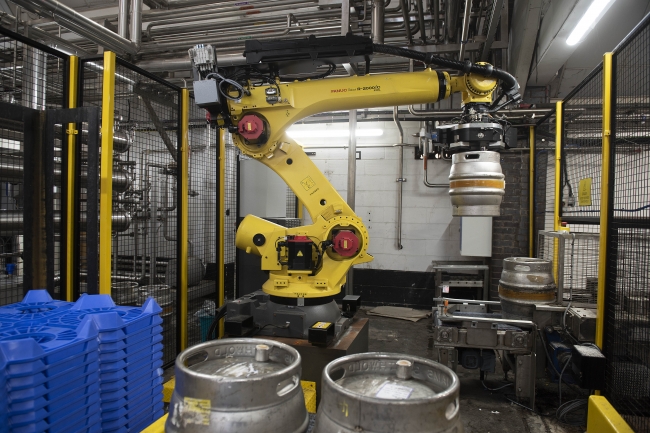 Adnams had exhausted all available floorspace but upgraded its old palletiser to a more compact automated solution designed by FANUC / Picture: FANUC

However, the R-200iC/210L was not Adnams’ first foray into robotics. Back in 2017, in response to the growing popularity of keg beers, Fergus and his team decided to expand Adnams’ keg programme. Up until then all non-cask beer was sent away for kegging, but the brewery wanted to bring that process in-house at its main site in central Southwold. This involved finding space for conditioning tanks, as well as filtration and kegging equipment. The final piece of the puzzle was the addition of a FANUC R-2000iC/165F robot within the kegger, which was used to lift and stack the newly-filled kegs. While this was on a much smaller scale compared to the brewery’s cask line, its success paved the way for the much larger system which followed on the cask filling line in 2018.

Fergus continues: “Compared to a manual process, automation is much better. Not only from a consistency and speed perspective – robot loading is twice as fast as manual loading – but for our production team, it takes away all the health and safety issues linked to manual handling out of the equation.”

However, there was another underlying factor which helped tip the balance in favour of a robot loading system, rather than a like-for-like palletiser.

“One of the main reasons we chose the robot system – aside from floorspace – was that we wanted to move away from wooden pallets, which we’d been using for years, and start using plastic locator boards,” says Fergus. 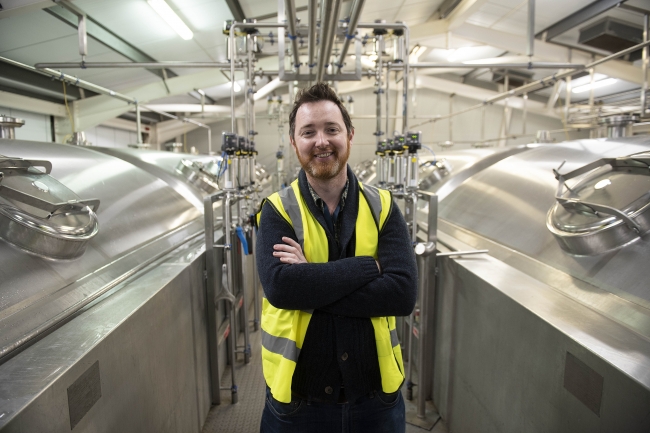 Locator boards are durable plastic interlayer boards which allow barrels to be stacked securely and safely on top one another.

At Adnams’ cask palletising system, the FANUC R-200iC/210L will pick six filled casks off the line and place them on a conveyor in two rows of three. The robot will then select a locator board from a magazine stored within the cell, and place it on top of the six barrels, before collecting the next six barrels from the filling line and stacking them on top. This process is repeated until there are 18 barrels securely stacked, before they are moved to the end of the conveyor where they can be collected by forklift truck and either loaded directly onto a distribution lorry, or stored nearby until ready for collection.

Fergus concludes: “Plastic locator boards are light, they’re cheaper, they last longer; and they also enable you to get more product on a vehicle as you can take some of the weight out. Ultimately there were lots of benefits from moving to locator boards from pallets, however we couldn’t do that on our old palletiser system so, as part of putting the robot in, we moved to locator boards as well.”