Insight Precision was established in the 1980s as a general contract machine shop. Currently, work is carried out mainly for the machine tool, mining, energy, electronics and automotive test equipment sectors. 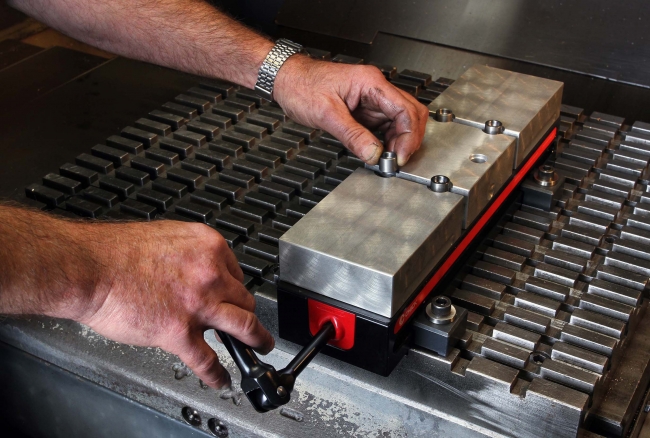 Founder and owner Chris Poole, explained, “The One-Lok is a fast-acting alternative to a conventional vice and saves a lot of time.

“Instead of having to wind the handle sometimes dozens of times to clamp a component, the Chick system is adjusted in seconds using a QwikSlide mechanism.

“It allows the moveable jaw to be unlocked and slid rapidly to approximately the right position, near the workpiece, after which just a few turns of the handle are enough to secure the part.”

There are seven vertical machining centres on the shop floor at Malvern, including 5-axis models, and the Chick One-Lok can be used on all of them. It is secured either using the T-slots in the machine tables or the cross slots in a baseplate mounted on the tables. The plate provides greater versatility of positioning, as its slots are more closely spaced.

The One-Lok’s mechanism is fully enclosed and protected from build-up of swarf. A squeeze-clamping action applies an equal and opposite force to the fixed jaw as the moving jaw closes and also imparts a pull-down force, promoting security as well as accurate location and machining. Chick’s interchangeable jaw system, which requires a single turn of a locking screw, speeds changeover from hard to soft jaws. 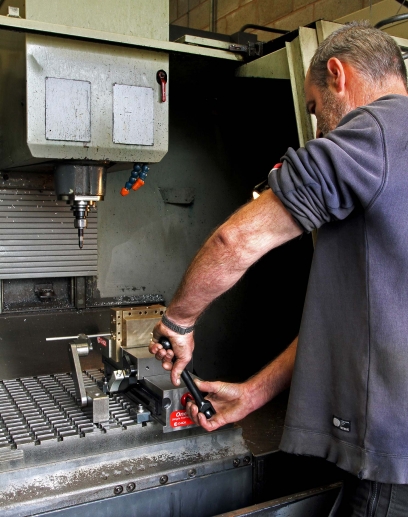 The other Chick workholding solution from 1st MTA in use at Malvern, called Qwik-Lok, is ideal for tackling larger batch sizes. It is normally used with soft aluminium jaws that have been pre-machined with a specific shape to securely hold multiple components. They are usually of the same type, but may be different parts of an assembly, for example.

The twin-station system supports high productivity by being able to squeeze two moveable jaws from either end against a fixed jaw at the centre, thereby doubling the number of components that can be machined in one clamping. The opposing forces cancel each other out when the handle is tightened, providing an accurate reference point for machining.

Mr Poole continued, “If we have 1,000-off parts to produce, we load two in each jaw every time and end up machining them in 250 hits.

“Not only is load / unload time drastically reduced, but so too is the overall cycle time, as fewer tool changes mean much less idle time over the course of a batch.

“In addition, the jaws snap on and off quickly, which allows us to start the next run of components with minimum delay.”

He is now evaluating the possibility of using Chick’s precision ground foundation plates, which bolt to a machine table and offer a grid of holes spaced 50 mm apart on which to locate the manufacturer’s workholding products. The plates allow fixtures to be mounted quickly and consistently, reducing set up time and improving repeatability.