Omicron UHV Technik is a specialist manufacturing company within the Oxford Instruments PLC group, focussing mainly on producing ultra-high vacuum chambers as well as high precision components and sub-assemblies for the scientific instrument industry. The company works mainly in 304 and 316 stainless steel plus a small range of copper and aluminium alloys. Batch sizes have increased in recent years, prompting the company to seek optimised methods for producing parts as efficiently as possible.

With this in mind, the East Grinstead firm has purchased a suite of six quick-adjusting Chick workholding systems from 1st Machine Tool Accessories. Two are Qwik-Loks, capable of holding either one component or two simultaneously. The other four are One-Loks, on which the moveable jaw is slid rapidly to within a few handle turns of full clamping, avoiding the dozens of turns needed to close ordinary wind-up vices. 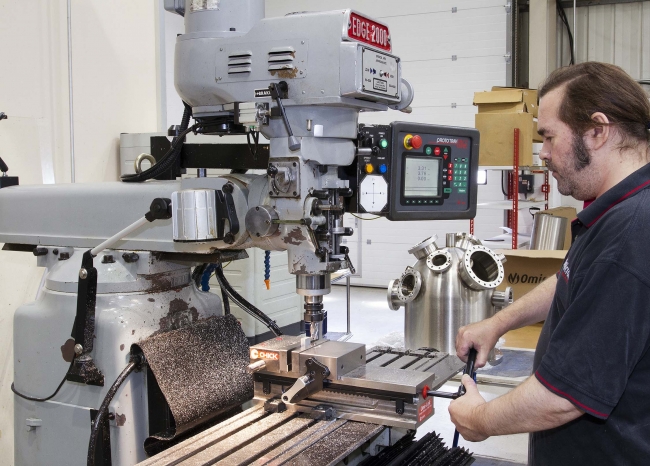 Two Omicron employees – machine shop manager Cliff Walsom and CNC programmer Roy Groom – both independently estimated that components are set up for production four times faster using the Chick units, compared with when conventional vices were used. Not only are the units faster to close, but they hold the parts to a high degree of repeatability, so there is no need to waste time tapping them down, squaring them off and clocking them into position.

The Qwik-Lok System 5 units with fast jaw change are used mainly on two Bridgeport vertical machining centres, a VMC500 and a VMC610. The Chick units were purchased on the recommendation of Mr Groom, who was familiar with their benefits from using them during previous employment at a local subcontractor. He said: “The surface science assembly parts we manufacture range in size from half a metre down to a couple of centimetres long. Not only are the latter fiddly to clamp, but they also have to be produced to tight tolerances, typically ± 0.1 mm but often down to ± 20 microns.

“The only way to hold them securely and accurately is to retain them in bespoke aluminium jaws machined to their shape. However, we could not use soft jaws on our old vices because the clamping pressure could not be controlled accurately enough. This problem was compounded by a gradual increase in batch size, which has quadrupled from 5- to 10-off to between 20- and 40-off.”

Greater speed and precision of workholding were needed to ensure economical productivity, so the Qwik-Loks were purchased from 1st MTA. They are used exclusively with application-specific soft jaws held in their own boxes and logged in a spreadsheet for rapid identification and location.

One job that has been transformed is the manufacture of a family of small aluminium-bronze rods on which the thickness tolerance is ± 0.05 mm. Previously, the parts tended to move in hard vice jaws, so it was difficult to hold tolerance and surface finish. 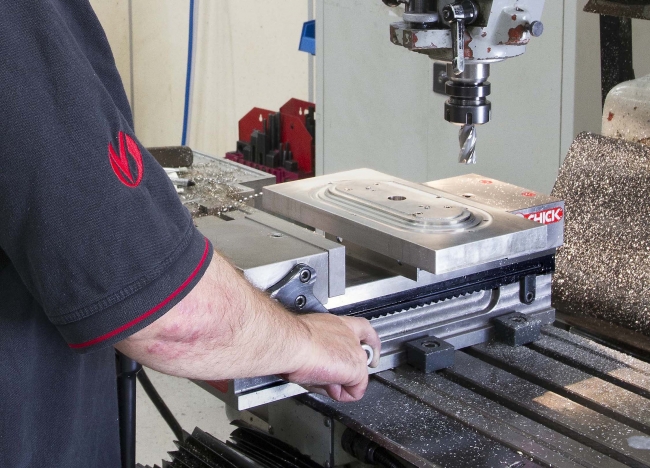 Greater speed and precision of workholding were needed to ensure economical productivity, so the Qwik-Loks were purchased from 1st MTA / Picture: 1st MTA

Now, aluminium jaws have been machined so that the parts are secured in the Qwik-Loks, two at a time, first horizontally and then vertically for a hole to be drilled in both ends. The dual-station workholding units squeeze the two moveable jaws from either end against a central fixed jaw to cancel the opposing forces, leading to even pressure and repeatable clamping. It is no problem to hold the required accuracy as a matter of routine and this job alone is saving Omicron a lot of money, according to Mr Groom.

He continued, “We have been delighted with this clamping method, which is equally capable of retaining large parts. An example is a 304 stainless steel pivot flange which we machine from a laser-cut blank that is slightly wider than the unit itself. We designed a soft jaw in BobCad based on the solid model of the part, including gripper inserts to hold the rough surfaces of the blank.

“The Qwik-Lok is secured to the foundation plate using four toe clamps to provide rigidity for heavier machining. However, it can be secured by two bolts through the base when taking lighter cuts, allowing the units to be ganged closely together for larger batch work. The pivot flange is held securely during four machining operations, which involves mounting the Qwik-Lok on its side to complete operations on the edges of the part, such is the versatility of this workholding system.”

It was not long before the disparity of productivity between the VMCs and the manual machines became evident, so the conventional vices on the turret mills were replaced with four Chick One-Loks from 1st MTA. Again, it is mainly stainless steel parts that are produced, in significantly shorter time frames than previously and to better accuracy.

Conventional miller, Jim Fritz, confirmed, “It is easier and quicker to clamp parts in a One-Lok due to the quick-sliding moveable jaw.

“Just a few turns of the handle complete the clamping, which is highly repeatable and includes a pull-down action to hold the part more securely. Half of the time we use hard jaws for general clamping applications, but we also machine soft jaws for holding more awkwardly shaped parts. The jaws can be interchanged quickly by turning a locking screw.”