CKF Systems has recently installed two robot cells into the production line of a world-leading sweet manufacturer to handle and mix a variety of loose jelly and gum sweets. The solution has the flexibility to handle a variety of oiled, sugared and starched confectionery.

CKF was approached by a long-standing customer to design two more robotic systems to pick and tip trays of sweets allowing them to be packaged as we know and love them.

In 2011, CKF developed a robotic system to weigh 5kg of sweets that had previously been moulded and coated in starch into large trays to be cured. A robotic system would then palletise these trays into two columns 25 trays tall. Four more tray filling lines were installed by CKF over the years to keep up with the production demands of the customer. 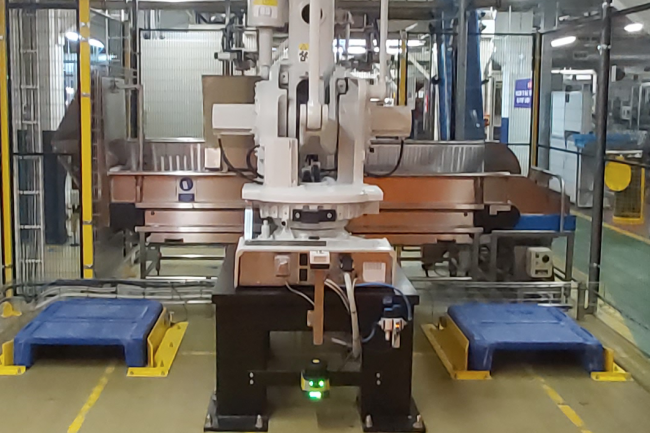 After 24 hours, the sweets have cured to a stage where they can be tipped into a bulk conveyor where the starch is removed and they are fed into a high speed bagging machine. This process had been manual and very labour intensive until CKF developed a fully automated solution to robotically remove trays from the pallets in pairs and carry out the tipping process, reducing the risk to operators and damage to product. This cell required a large amount of space and included a fully automated conveyor feed system. A further three identical cells were installed to handle the range of sweets and tend the production lines.

With the development of SafeMove 2, software that allows safety sensors to be utilised to produce a robot cell with minimal guarding and therefore a substantially reduced footprint, CKF used the new technology to allow the robotic tipping cell to be reduced in complexity significantly. The new systems utilised the same ABB IRB Robot and tooling design as previous cells but needed no conveyors or physical guarding to the front of the cell.

Using an array of safety vision devices, the system can detect the approach of an operator to position and remove pallets, which will make the robot automatically slow down until it enters a safe stop condition. This allows the operator to exchange the pallet without the use of a normal key exchange system with physical guarding.

SafeMove 2 has allowed the customer to install the robot systems whilst utilising far less physical space which means they can further maximise their site. Due to the reduction in hardware, the cells can be developed at a lower cost and will interface easily with AGVs.