Welsh firm DMM Engineering, which manufactures mountaineering and outdoor products, reports productivity increases of around 40 per cent on vertical machining centres (VMCs) at its Llanberis factory. It follows the replacement of old rotary tables with new ones from Kitagawa, supplied by sole agent, 1st Machine Tool Accessories.

The first Kitagawa MR160 indexer was installed on a Cincinnati Arrow 3-axis VMC to provide a fourth CNC axis for positioning DMM’s more complex components. Kevin Edwards, CNC manager, said, “On one job, compared with using an old table, we saved £21,000 in the first year based on £35 per hour machining costs, 24/7 for most of the week. The table paid for itself in four months and the savings are on-going.” 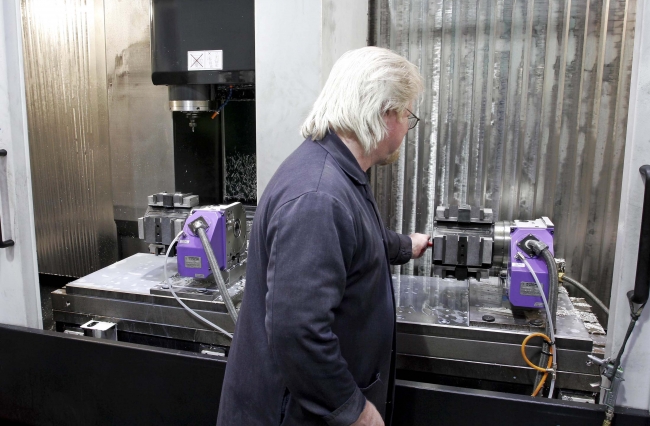 He explained that three factors contribute to the high level of efficiency achieved by the Japanese-built Kitagawa units. First, the triple-disc brake gives a clamping force of 310 Nm, substantially higher than that of the superseded tables, allowing cutting feed rates to be raised by an average of 27 per cent.

Second, the 41.6 rpm positioning speed of the MR160 is three times faster. Each 90-degree index takes fractionally over one-third of a second, compared with one second for the older tables. Normally, to access all four faces of a cube there are four 90-degree turns in a cycle, but on some jobs there are considerably more, resulting in substantial cycle time reductions.

Finally, communication with the machine tool’s CNC system is quicker, both at the start of a cycle and on each index. As a result, there is a further reduction of one minute over a typical 10 to 12 minute cycle and the more frequent the indexing, the greater the saving.

Mr Edwards continued, “Overall, taking into account the three areas of increased efficiency, I estimate that the Kitagawa rotary tables have cut 3+1-axis cycle times on our VMCs by around 40 per cent.”

Other benefits of the new table are its compactness and the increased accuracy of the machined components, with ± 0.1 mm dimensional tolerance easily held, down to 50 microns in some instances.

Moreover, the table is able to store up to 100 programs of 50 blocks each, or equivalent. This amount of memory in the control panel is more than adequate for DMM’s needs. Together with the reliable built-in file system, it avoids having to enter command lines every day to synchronise with the CNC programs, as was previously necessary. 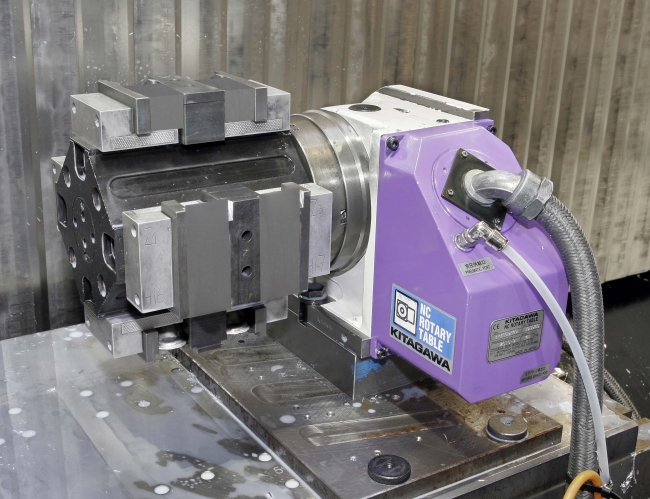 The MR160 is competitively priced, according to Mr Edwards, at around two-thirds of the other shortlisted product. This even includes Kitagawa software to allow fully interpolative 4-axis machining, although so far DMM has only used the MR160 to position workpieces.

The other two MR160s at DMM are currently on a Mazak VTC-200C VMC for pendulum machining of belay / rappel devices, a rope management system that controls descent in an emergency or when the climber is abseiling. The machining application is unusual in that 52 table indexes are required during each cycle, rather than the more normal four.

Mr Edwards concluded, “In addition to the benefits of using the Kitagawa tables, the Chick quick-acting vices we source from 1st MTA have reduced setting times by 70 to 80 per cent, which translates into a 30 to 40 per cent productivity increase across our factory.

“These advanced positioning and workholding technologies allow us to keep down manufacturing costs in a fiercely competitive global market and ensure that we provide a highly flexible and responsive service to our customers.

“Furthermore, the accuracy of all the equipment supplied by 1st MTA and the quality of the service we receive from their staff, from sales through to equipment installation and applications engineering, continues to support the high accuracy machining that is essential for mountaineering products on which people’s lives depend.”