I understand
Home••Opinion: Is Ag4.0 the answer...

Opinion: Is Ag4.0 the answer to feeding the world?

Many of us are now familiar with “Industry 4.0”, the digitalisation of manufacturing, but agriculture is having its own digital revolution. Drones scan fields for low fertility zones, robots focus on precision rather than speed in crop management, and autonomous machinery can harvest a field from a computer hundreds of miles away. The urgency to transform food production is even greater than in manufacturing. Lee Collinson from Barclays explores some of the factors that are accelerating agricultural technology (“agri-tech”) investment.

Food production faces several challenges: productivity, labour shortages, food security and safety, population growth and sustainability. Reducing waste, which has improved but is still relatively high in the food chain, can also be added. The Covid-19 global outbreak has highlighted countries’ reliance on the food supply chain to meet our growing consumer tastes and expectations for speed, quantity and quality.

For supermarket shelves to remain full, agriculture has to modernise in several ways.

Consider that in some cases, 95% of chemicals put onto the land are wasted. A study by the Institution of Mechanical Engineers several years ago showed that up to 50% of all food in the UK is wasted. Seasonal labour has always been a vital part of British farming and food processing. The outbreak is potentially very disruptive for the farms that cannot source adequate labour – and despite calls for a “Land Army” of UK workers to step up, many producers are showing concern about the shortfall. 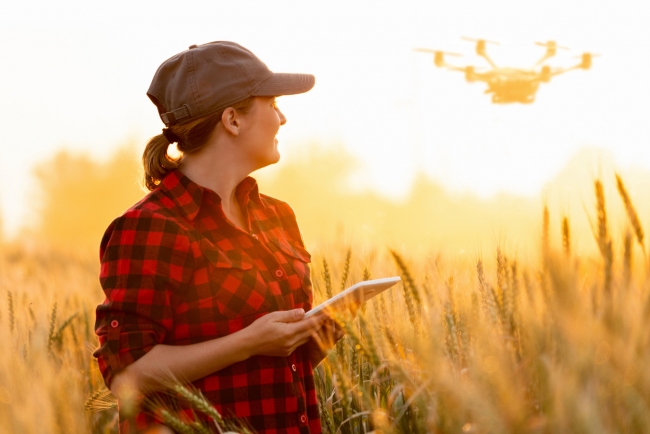 Agriculture is also having a digital revolution – drones can scan fields for low fertility zones, robots focus on precision rather than speed in crop management, and autonomous machinery can harvest a field / Picture: Getty/iStock

James Hague, Relationship Director at Barclays says, “The adoption of agri-tech is an unavoidable theme to bring focus on production efficiency from “field to fork”, delivering benefits across three major deliverables.

“One, increasing farming intensification through improved output efficiency. Two, increasing output without raising the carbon footprint through technological advances. And three, addressing the labour-intensive nature of the sector and global impacts on the restricted movement of people we are seeing. Agri-tech is a catalyst of change which through time needs to be adopted to deliver and support a robust and sustainable food supply chain.”

The current situation has made the UK examine its food security. The Sunday Times reported in August 2019 some farmers believe the country is producing only enough food to be self-sufficient for about 60% of the year, meaning the UK could not feed itself if supplies from Europe had prolonged delays. When the original Agriculture Bill (2019-20) was published it was criticised for a lack of mentioning food production. When the Bill was reintroduced to Parliament in January, the Government responded by including a section on food security. It would require the Secretary of State to present a report to Parliament at least every five years “containing an analysis of statistical data relating to food security in the United Kingdom”.

What has to change? Smart or intelligent farming is about precision over outright speed and volume.

“Developments are in two main streams; hardware and digital,” Kit says. “The first is making the machines in the field more productive and precise, reducing waste and improving sustainability. The latter aims to improve on farm decision-making though turning agronomic data, both spatial and temporal, into information to drive economic and environmental improvements.”

These hardware and digital developments will one day form the basis of an interconnected system of systems, so-called “Ag4.0”, whereby information will be shared up and down the whole food supply chain driving decisions at all levels.

The Hands Free Hectare began literally as one hectare and is now a farm covering over 30 acres, the aim of which is to operate with no people for one year. One of the lessons has been that less can be more. Kit says, “The project has allowed the exploration of agri-tech ideas like no other project; we have been able to push technologies to the limit and identify current inadequacies. We have automated small-scale, less damaging farm machinery providing a glimpse of what swarms of smaller high precision agricultural vehicles of the future may look like, if unharnessed from requiring the skilled operators we currently struggle to recruit in Western agriculture.

“Drones and smart sensors have also been used for the data capture and information-based decision making reaching the boundaries of current farm digital platforms. These projects have shown how close we might be to fundamental changes in farm systems; not 50-years away but possibly only five,” Kit adds. 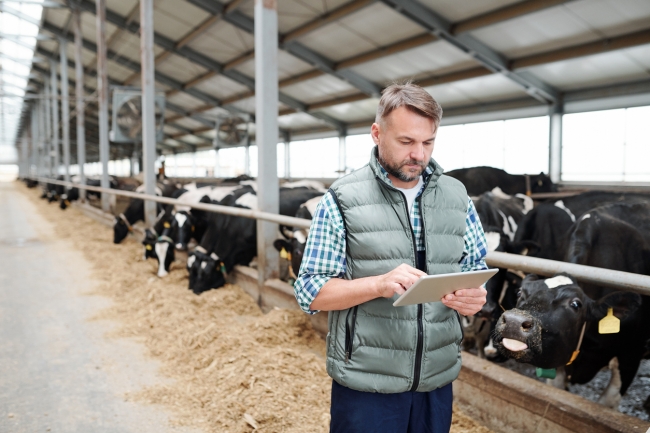 Data in a smart agricultural system can connect to a smart factory and then retailers / Picture: Getty/iStock

Empower the buyer: Connect the farm to the factory

Another very important aspect of modernising food production with digital technology is traceability and consumer choice.

People care where food comes from and how it is made; consumers have increasingly demanded more information from their food; provenance, allergy safety, nutrition and the ethics of the producers.

Data in a smart agricultural system can connect to a smart factory and then the retailer to give the buyer what they want.

Dr Andrea Paoli, Associate Professor and Head of Food Robotics and Process Automation at the National Centre for Food Manufacturing in Holbeach, Lincolnshire, says as we digitise both farming and manufacturing, connecting them up achieves several win-win side effects. “Farming – as is the whole food supply chain – is in a perfect storm, with the pressures of productivity, waste, labour shortages and more. It has to automate to increase yields and be sustainable, this is going to happen anyway. So, we should capture the data as it automates and share it with everyone from the farmer to the consumer. Data is not a by-product, it is real added value.”

Experts like Andrea say we should share the information collected at the farming stage with the food supply chain. Not only would this improve production efficiency and security, but would enable a new level of traceability. A person can buy a ready meal at a retailer, who scans the barcode and because all the information is securely stored in a blockchain the buyer can see where the vegetables were harvested, how they were farmed, what was used as fertilizer this year, and previous years. “You are taking a picture of the final product from data taken from the entire supply chain.”

This traceability rigour will benefit companies that are organic and make high food standards a USP, and in theory incentivise more producers to adopt ethical best practice, giving them the data to show-off their standards.

What about cost? Applying all the technology involves capex and forcing food suppliers to be greener and better could hike prices. Low cost food is essential for society. Andrea believes the technology revolution in farming will happen anyway, so if there is a price increase from tech adoption the added efficiencies realised by automation will counter this. “In the next five years we will observe a significant cost reduction of digitisation technology as a natural effect of its increasing demand in new markets such as food and beverage,” he says.

Roxanne Martin, AgriTech Industry Lead for Barclays Eagle Labs says: “The Global population is likely to be around 9.8 billion by 2050. Ag 4.0 is not only about growing more food for an ever-growing population, with less land and fewer resources, it’s also about ensuring that we do this in a sustainable way so that our planet can continue to thrive for generations to come.”