Opinion: Modular building – industry unicorn, or stuck in the mud?

In February the media reported that the Chinese had built a 1,000 bed hospital near Wuhan, the centre of the coronavirus, in 10-days. It’s possible to build quickly if the situation demands it – but 10-days?  It seems very likely that the hospital was of modular design; manufactured in a factory offsite and assembled in sections on the site.

Lee Collinson from Barclays highlights that it’s a very topical example of a big manufacturing trend for offsite modular construction that they spotted in 2019, which is growing fast, although it has several challenges.

Why the need for change?

Studies show that Britain must build c. 300,000 new homes a year to fulfil demand; the current annual total for England, Scotland and Wales is about 190,000. A raft of reasons makes this a tall order, and cost is a primary barrier. At the moment, factory-made housing can be more expensive per unit than traditional bricks and mortar housing, but it has huge potential to be cheaper with scale and it is statistically safer, greener and more attuned to a digital design-for-manufacture system that could save the building industry millions. 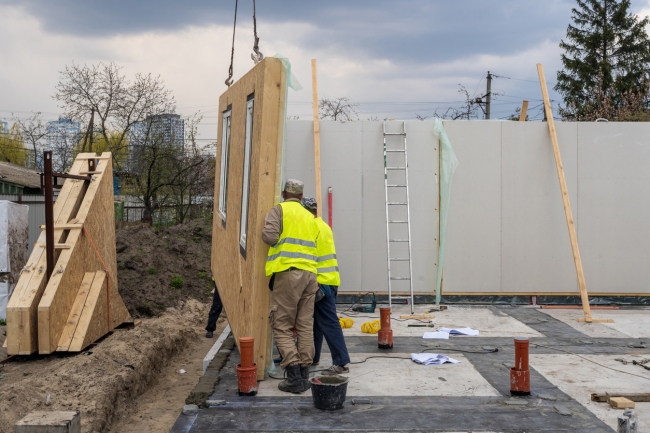 Studies show that Britain must build c. 300,000 new homes a year to fulfil demand; the current annual total for England, Scotland and Wales is about 190,000 / Picture: Getty/iStock

The wider industry trend is called Modern Methods of Construction, or MMC, and includes the use of Building Information Modelling (BIM), Design for Manufacture and Assembly (DFMA), and an industry-recognised assurance scheme to help stakeholders address the issues associated with bringing non-traditional building systems to the market.

Modular has intrinsic advantages, but a step-change is needed

Build Offsite, the UK association for the modular building industry, says that taking a DFMA approach and applying more controlled factory conditions to construction can realise these striking benefits:

There are two main types of modular housing. Volumetric manufacture create as much of the finished product as possible in the factory, with on-site labour completely minimised – these are completed units that are “stacked” together. Panelised or flat pack homes create a kit of parts that can be quickly assembled on site. Both styles reduce construction time and help to answer perhaps the building industry’s biggest problem: the workforce.

Exposed by, among others, construction expert Mark Farmer’s 2016 report “Modernise or Die” on the future of UK construction, the sector does not have enough qualified people in managerial and engineering jobs, nor are there enough skilled builders and labourers to fill vacancies on building sites. EU uncertainty  in the last 3-4 years has not attracted additional  skilled labour from Eastern Europe, which has been a useful labour source in the recent past

Farmer’s recommendations included that industry needs to modernise from the ground-up; embrace digital design and build tools, standardise processes and materials to avoid time-wasting on site, invest in offsite modular construction, thereby helping solve the skills shortage by switching to a make-and-assemble paradigm from the centuries’ old mud and boots one where recruitment is strained. “Training people in a factory is much easier and takes less time than learning a trade and this could be important should skills gaps arise now we are no longer part of the EU” Richard Cawdron, Relationship Director at Barclays, points out.

And the government has its sights on modular building as a winner.

Housing Minister Esther McVey said in October that she wants the UK to be “the world leader” in modular building within the next decade. Transforming Construction is one of 15 challenges in the Industrial Strategy Challenge Fund. This challenge will invest £170 million, matched by £250 million from industry, to modernise construction processes and techniques, including using digital design and offsite manufacture. Homes England, the government’s housing delivery agency, announced in September that it had invested £30m in Yorkshire-based Ilke Homes a volumetric manufacturer and the industry is braced for more government money. 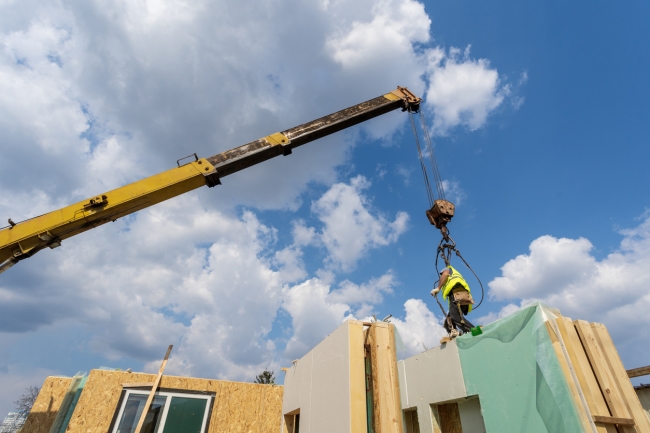 However, while modular construction seems to be the next golden child for UK industry, it’s not straightforward. Commentators say it has had much hype but is still characterised by many, smaller and under-capitalised players, and lacks the size to make the impact the government needs. Research by real estate firm JLL shows that 13.5 million square feet of manufacturing space – the equivalent of over 200 football pitches – is needed to increase the number of new homes from the current rate of c. 190,000 to 300,000 per year.

An article in the UK Manufacturing Review 2019/20 on factory-built housing points out that overheads and start-up costs still present a big risk to scaling up offsite modular.

Several modular housing companies have posted losses, although as they are early stage fast growth this is not unusual. And to date Legal & General, which established a modular homes business in 2015 with a huge factory near Leeds, has only produced a small number of homes. Offsite modular construction is struggling to gain the scale it needs to make a big difference to the UK housing shortfall.

But this is a nascent industry and it will have teething problems. More companies – manufacturers, material suppliers and building consultants – are coming to market. There will be consolidation but the size of the job at hand, to build over 3.1 million new homes in Britain by 2030, virtually guarantees growth.

Barclays’ Richard Cawdron specialises in fast growth and disruptive technologies, supporting clients to become ‘debt ready’. He is optimistic that modular factory-built housing is a sector that will grow quickly. “I would expect to see Barclays’ engagement growing 10-20 times in the next two or three years, albeit from a  low base,” he says. “I don’t see modular housing providing the majority of new homes built in the next 5 to 10 years, but its capacity as a portion of the UK’s new homes is expected to increase, and in that in 5 to 10 year period we may even start to see modular construction taking significant share of the value end of the market.”

He adds “At the moment the sector is evolving quickly but is at an early stage. The quality is so much higher than it was in the past and I think we are getting to the point where people are starting to accept modular. Homes can now be built, from start to finish, in just 40 days.”

We will watch with interest the size and scope of the Industrial Strategy Challenge Fund’s Transforming Construction fund when it is announced, which is expected later this month.